"River Falls in the Moonlight"

So last week was Thanksgiving and I did not post a Pic of the Week. I hope that everyone enjoyed their time with friends and family over the holiday. Now is the time of year when I start to my photography down and catch up on my edits. Like this photo for example, it was taken 3 weeks ago and I’m just now getting around to uploading it. So you should be expecting recent photos coming within the next several weeks. On to the story behind the photo…

A few weekends ago I met up with my good friend Jim Livingston in Amarillo, TX to do some night photography at some amazing private locations of the Texas panhandle. Our destination was some private land near the mouth of Palo Duro Canyon and the start of the West Fork Red River. This area is known as River Falls and is appropriately named such.  The community of River Falls is located on the Currie Ranch just east of Lake Tanglewood and features an airport, a beautiful bed and breakfast retreat, and incredible homes with views of the canyon. To find more about River Falls click here: http://riverfalls.tc/index.html

After work Saturday afternoon I drove to Amarillo, TX to meet up with Jim at his apartment. We exchanged greetings and quickly piled our gear in his Toyota 4Runner and drove to River Falls. By the time I had arrived the sun was starting to set and moon was coming up. This was the week of the long anticipated supermoon. We wouldn’t have time to shoot the sunset or moonrise, but that was ok. After all, we were there for a night photography shoot. We reached the entrance gate to River Falls and took a steep bumpy ride through soft mud to the entrance of Devil’s Kitchen. Devil’s Kitchen is a cave in the cliffs of Palo Duro Canyon. In the cave is an arch and one of the few natural arches in Texas. This is arch in known as the Chimney. We spent a few hours shooting the cave and chimney. It was such a unique setting you would never imagine it was in the Texas panhandle. Once we were satisfied we moved on to the overlook of River Falls. This was quite a site to see. The full moon was now shinning on the falls and shimmering in the water. We were still far away from the falls, but the moon was so bright we could see it just fine. We could also hear the soft rumble of the falls as it echoed through the canyon walls.

Now don’t get me wrong, I was having a great time and was quite excited for the photos I was getting, but I wanted to be closer to the falls and see them in person. Not to mention, capture a few ultra-wide angle close up shots. We made the even more treacherous drive down as far as we were comfortable going. We continued on foot to the bank of the falls. It really sneaks up on you, despite being in an area known for its arid and dry landscape River Falls is lush and vibrant with plant and wildlife and there are only a few angles you can actually see the falls. As we got closer to the falls the ground beneath us began to deteriorate and we very quickly found ourselves in soft, wet mud. But after getting a little muddy we reached the falls—and it was spectacular! Again, this did not look like something from west Texas.

I spent hours exploring different angles and compositions of this amazing place. But one shot that stands out to me is my up close wide angle shot. I got as close to the falls as I could just barely avoiding the spray. The full moon was shining on the waterfall making it glisten and made the wet rocks and vegetation almost sparkle in the moonlight. I used a longer exposure to capture more of the stars and soften the waterfall. I may have gone a little too long as you can see some movement in the stars. But I was very pleased with the final shot. I can’t wait to photograph this incredible landscape again! 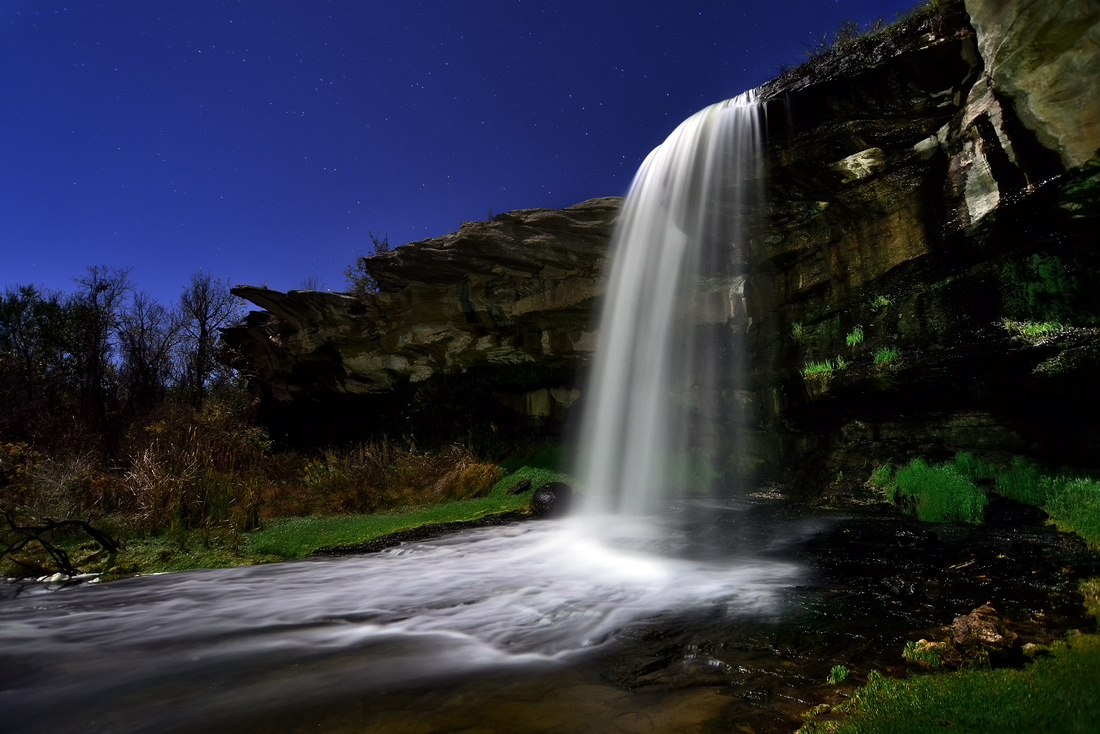