Pic of the Week: Only in Texas 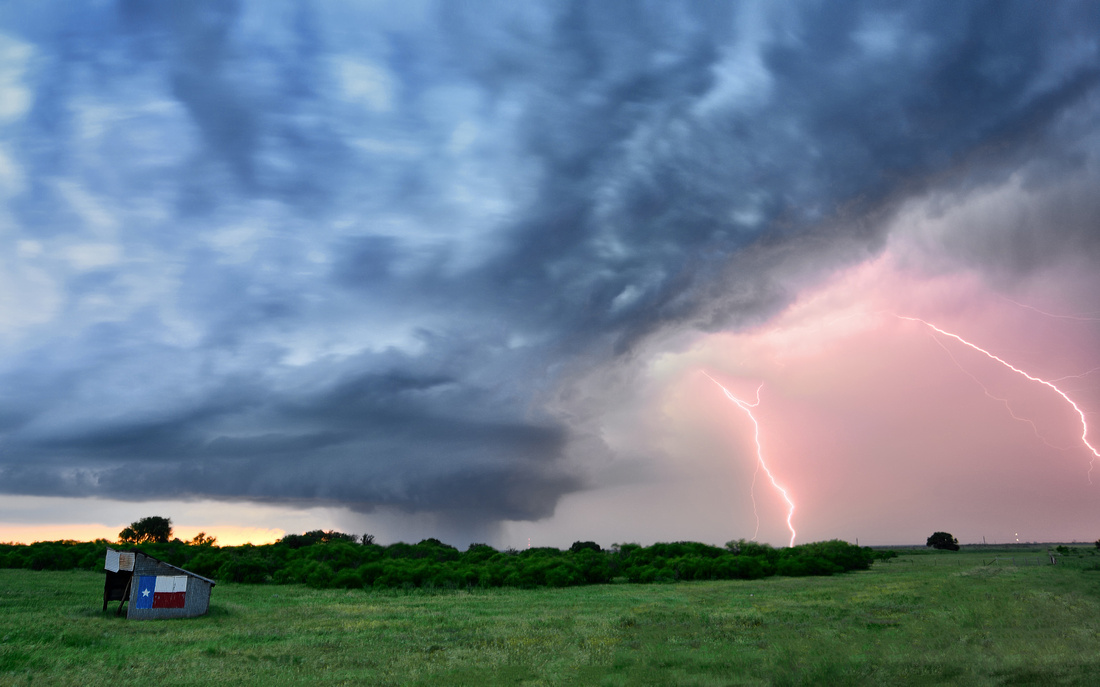 Spring time is officially here in Texas and I haven’t had the opportunity to chase just yet so I have to get my weather fix by reliving past storm conquests. This photo in particular is especially interesting to me. I was chasing a rather less than impressive storm just east of Olney, TX. After a few hours of minimal lightning, boring storm structure, and no photos I started off towards home. As I turned north on US 79 out of Olney I caught a glimpse of an updraft with a base northwest of me. “Maybe I’ll get a chance for some night time lightning photos on the way home” I thought to myself.

Continuing north I was able to get much closer to the storm and noticed it looked more intense. A quick check of the radar would confirm my observation and I was able to navigate to the storm. By the time I reached the storm the sun was setting and I was losing light quickly, but I wanted to get a good shot. Lightning was exploding from the updraft and the sinister looking core now so I set up my camera and started firing off shots hoping to catch a strike in one the exposures. I ended up with some fantastic results and stood in awe as the storm drew closer. Eventually I was hit with outflow wind and heavy rain and needed to retreat to get away from the torrent. While bailing south I came across this small shed with the Texas flag painted on the side. It caught my eye and I thought it would make a fantastic foreground element to the looming storm behind me. I pulled over and quickly set up for another shot.

I sat with my camera poised and ready for the lightning. But something odd happened—the lightning stopped. I could still hear the rumbling of thunder in the storm but I never saw any lightning. I felt a drop of rain hit my cheekbone, the kind of heavy cold rain that lets you know a downpour is imminent. I was just about ready to go home and I thought I would get one more shot just for good measure. I pressed down the button on my remote release and the mirror slapped up exposing the sensor. For six seconds that shutter remained open just waiting for the prefect bolt of lightning to strike. It seems like an eternity waiting for lightning while your shutter is open. Your staring intently on the area you last saw lightning and anticipating where that bolt of energy will land in your frame. The image pops into your head and you can feel the excitement welling up inside you ready to burst. And then, almost like the storm is openly mocking you, the camera’s shutter closes. No lightning…again.

Sometimes that is how it goes you don’t get the shot, or you think you don’t get the shot. Out of just pure spite I stayed in the path of the storm. I was defiant against the gusty winds and the incoming rain. I made one final exposure and right before the shutter closed I saw a bright pulse come directly from the vault just ahead of the core of the storm. This time I got the shot I wanted. I captured two brilliant lightning bolts from a beautifully sculpted supercell updraft with a shed that had the Texas flag painted on the side. I sighed a big sigh of relief and said to myself, “Only in Texas”. What I like most about this photo is the storm reflects the color scheme of the Texas flag unifying the color and composition. I came back with a spectacular shot that evening and one of my favorites of 2015.