For this week’s Pic of the Week I decided to flash back a few years. May 17 was the three-year anniversary of my Elaisville, TX tornado encounter and I wanted to share the story behind the image. Also, I did not have a new photo to share this week. Although there have been some storms commitments to work and other responsibilities have kept me from chasing them. Regardless, I thought it would be fun to revisit this past chase. 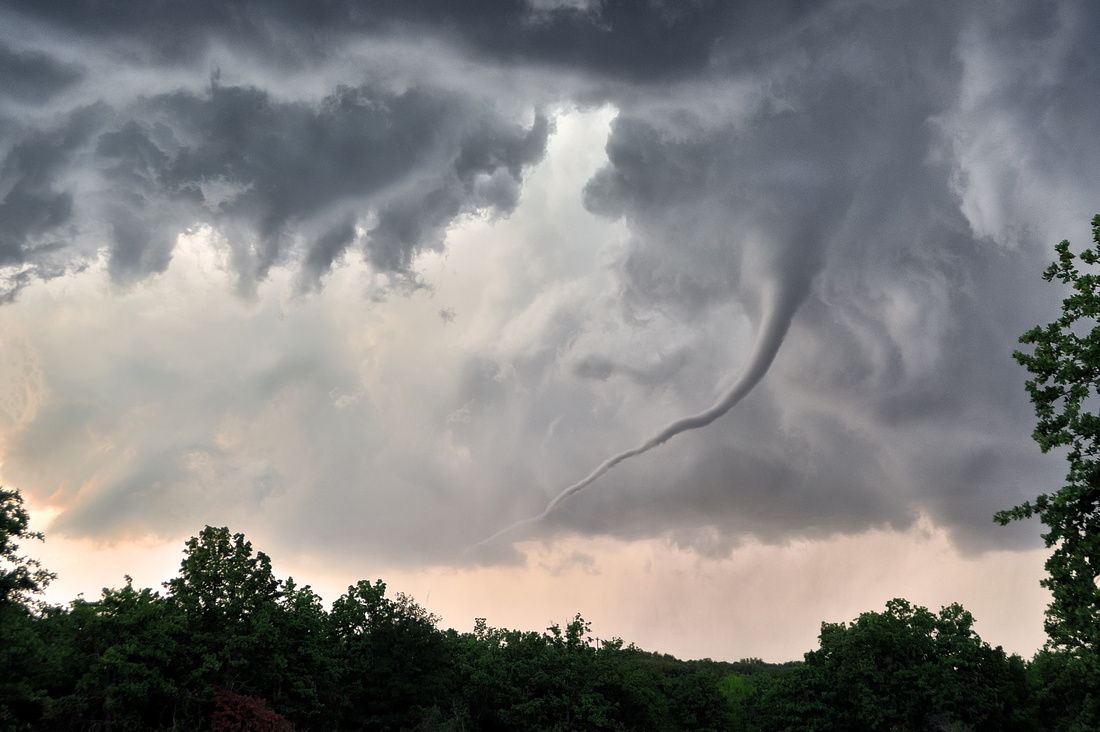 I left from work around 4:30 to head towards severe thunderstorms developing south of Archer City, TX. Weather forecast models were predicting a supercell storm near Graham, TX later that evening. As I approached the cell moving through Archer City I could see a fairly intense looking core crossing the highway in front of me. I was north of the storm and not in a great position if the storm started to produce a tornado. I took a quick look at the radar to see just how intense the core of the storm was. Radar indicated some large hail falling just to my south and if I was going to get ahead of the storm fast enough the only way was through the core. I pressed on south on Highway 79 heading towards Olney, TX. While driving I heard a distinct “thud” on the roof of my car. I recognized it—that was hail falling. Sure enough a few seconds later golf ball size hail began to fall to the ground. Luckily for me the core was pretty small and I was able to escape it without losing a windshield. I arrived to Olney, TX and watched some elevated storm structure and an unimpressive wall cloud. It wasn’t long before I need to get moving again to stay ahead of the storm’s core. I was shooting video when another golf ball size hail stone came crashing down right next to me. I filmed some of the hail for a few minutes and finally decided to abandon the storm.

A new cell was firing up over Newcastle, TX about 15miles away. Again I was north of the storm and once again I had to drive through the core to get in position. This storm was different, more mature and it grew in intensity very quickly. Torrential rain fell with intermittent episodes of hail hitting my vehicle and the road in front of me. Thankfully, these stones were only half dollar to golf ball size. When I arrived south of Newcastle I pulled over to shoot some an amazing rainbow and some of the storm structure. I was in position and ready for the storm to produce a tornado. There was one small problem, however. I needed gas. You never chase a tornado without a full tank of gas! The closest station was in Graham, TX and I quickly blasted south to Graham. While filling up reports of 3.5” hail was coming in to my immediate north. I looked over at the radar and could see the hail core and a hook echo approaching my location. The area of rotation was just north of Elaisville, TX.

I quickly got back in my car and blasted west on 209 to drive right into the inflow notch of the storm. This was interesting I could see an amazing mesocyclone ahead of me between the rain and baseball size hail that was falling all around me. I remember thinking to myself “Please don’t let me lose a windshield!”. A menacing updraft with beautiful striations and a low rotating wall cloud started to approach me. Unable to get out of the hail I decided to drop south on Fish Creek Rd (FM 3109). I was close enough to the updraft and I would be getting out of the hail dropping south. If I could far enough ahead of it I could pull over and take some photos.

I pulled off the road into a private gate and watched the storm roll nearly on top of me. An elderly woman pulled up and asked what I was doing. I informed her I was a storm chaser and that she should probably start heading home as the hail core would be approaching soon. The storm also looked like it was getting ready to produce a tornado. We chatted for a little bit and then I decided it was time for us to go. She needed to get back home and I was out trying to chase storms. She drove away first towards the south and I followed right behind her keeping an eye on the rear view mirror. I drove for 100 yards before I saw her slam on her breaks, turn into a driveway, and pull out her cell phone like she was filming something. I looked back behind my shoulder to see a cone tornado emerging from the rain. The second I found a spot to pull over and turn around I had my camera shooting the tornado out my window. I also recorded a few short videos. I was excited! I had never been this close to a tornado before. The tornado was just to my west and the closest it got was around 400 yards! That was the first tornado that day.

The tornado finally lifted and it looked like the storm was done. I dropped southeast on 168 and followed the road periodically checking behind me for new development. This area is close to the Brazos river and if full of hills and trees. Not exactly the best chasing territory. After a few miles I caught the glimpse of a funnel in my side view mirror. I pulled over to see a white funnel circulating just off to my north. I wanted to get a little farther ahead of the developing tornado and see if I could timelapse the sequence. While I was driving to a better location the tornado touched down. It was not as big as the other tornado, but the motion on it was absolutely amazing. The tornado twirled and spun staying on the ground for almost 10 minutes. I timelapsed the sequence watching the tornado take on some magnificent shapes and stages. The condensation funnel would reach the ground all the way, and then come back up, and then just barely touch the surface. It was mesmerizing. The tornado eventually roped out and I got back in my car to continue the chase. The storm never produced after that, but I was more than satisfied with my results. This had to be my favorite image of the tornado. You can see the spindly funnel clearly and if you look closely you can see the condensation reaching the ground. I really wish those trees were not there, but I also like the environment they create, helping to frame the twister. One of my all-time favorite storm images from one of my all-time favorite storm chases.