About four months ago I made an exciting investment in my photography. I had some extra cash and I got a great deal on a Nikon 20mm f/1.8 G ED lens. I bought this lens with astrophotography in mind. Since its purchase I have only been able to use it for astrophotography a few times. When I made the trip to Quartz Mountain back in February I used it to photograph some star trails over Quartz Mountain. That image can be found in the “Night” gallery. I had tried to photograph the milky way that morning as well, but was unfortunately clouded out. So the lens has been sitting in its box on my coffee table for a few months. Fast forward to present time and I finally got some use out of it.

I had been planning a shoot at Copper Breaks State Park this weekend, but there were some scheduling conflicts and I’m not going to be able to go. My plan was to camp out all night and photograph the milky way reflecting in the lake, but that will have to wait for another time. I knew I wanted to get some kind of milky way shot for the Pick of the Week because the conditions were too perfect. We had high visibility, clear skies, and cool temperature with almost no wind, so I needed to take advantage of the weather.

I researched a few locations and didn’t want to drive too far as I had work the next day. So I decided to try and photograph the oil derricks with the milky way behind them at Lake Arrowhead. As soon as I left work I started off to Lake Arrowhead. Using Google Earth I was able to find a nice spot that would give me a good view of the old oil derricks. When I arrived I scouted out locations and compositions that I thought would be interesting and I came across a magnificent patch of Indian paintbrush. I looked over the scene carefully and found a composition I thought would work with the milky way. I left Lake Arrowhead and returned home to eat some dinner and get some sleep before I headed out later that night. 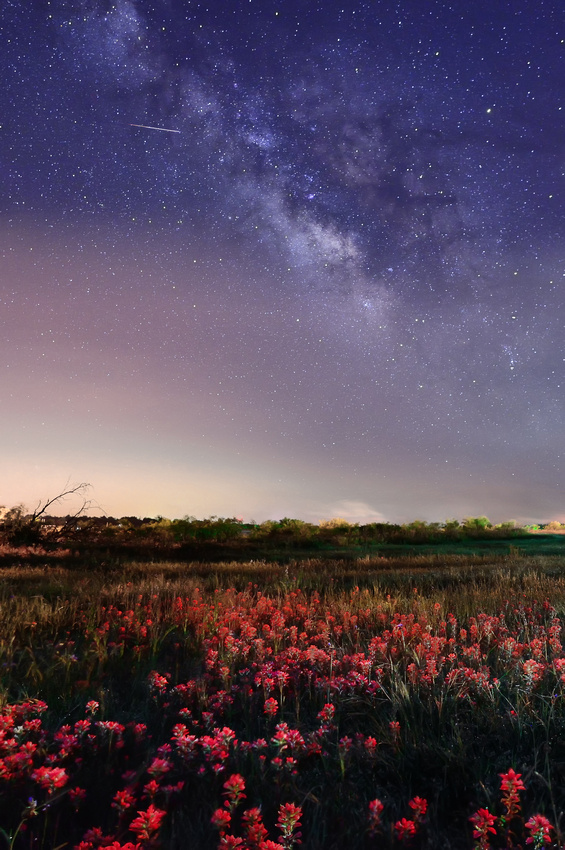 Around 2:30am I was woken by my alarm clock blaring in my ears. I took a moment to get situated and woken up fully before turning on my computer and checking the satellite. I was looking for cloud cover over our area. It looked like there might have been some thin clouds on the satellite, but I thought I would go outside and check for myself. Looking out my apartment I was able to see a faint haze off to the south. I wasn’t particularly concerned as I thought the cloud cover wouldn’t be significant enough to block out the stars. I gathered all my gear, hopped in my car, and drove off towards Lake Arrowhead. On the way there I saw fog hovering above the surface of the road, this actually had me concerned. I did not want to drive all the way out there for no photos! I kept driving down to the lake running into patches of thick fog along the way. When I finally reached my location fog was covering most of the lake and only a small portion of the sky had any stars. I decided I wasn’t leaving without some shots and I waited for the fog to clear. Shortly after setting up and getting my composition finalized the fog began to erode and the upper half of the milky way became visible.  I started snapping pictures watching the fog dissolve before my eyes. I was only able to shoot a couple of frames before the fog cleared entirely. But what I got from the fog was more than I bargained for.

I call this image “Serendipity” thanks to a good friend of mine for inspiring the title. There really is no other way to explain this image. I had one shot in mind and the weather did not turn out how I expected, but it made for a more interesting image. I was able to successfully capture the milky way with half of the galactic core in fog, and a rogue meteor over a patch of Indian paintbrush. If I got there too early I would’ve probably gone home because of the fog and lack of stars in the sky. If I arrived too late I would have seen a nice starry sky and captured some nice photos, but I would have missed the transition from a foggy to crystal clear sky. But I made it just in time to record this beautiful and unusual scene. And through simple serendipity I was able to make this memorable capture.

E B Hawley(non-registered)
How well you capture nature's grandeur!
Larry Dodson(non-registered)
Very nice indeed Ben, To get up in the middle of the night and go out in the great out doors take some real ambition and drive, I salute you for that. At 71 years old I am afraid that ambition has faded into oblivion for me, I cant think of anything worth taking a photo of that would get me out of bed at anything past 11:00pm. My hat is off to you Ben, keep up the good work, may all your treks be well defined and illuminated!
No comments posted.
Loading...
Subscribe
RSS
Keywords
pic of the week nature landscape travel sky Texas night oklahoma rock weather
© Ben Jacobi
Powered by ZENFOLIO User Agreement
Cancel
Continue