“Storm on the Plains”

We’re going quite a way back for this Pic of the Week. Today (6/1) is the nine-year anniversary of my first storm chase. I had met a local storm chaser (Jason Brock) through work and he was looking for a better camera to document his storm chases. I sold him his equipment and mentioned how much I loved storms and even showed him a funnel cloud I had caught on my own earlier that year. I gave him my business card and a few weeks later I received a call from him. “I can’t figure out this camera. I’ll make you a deal: You help me learn this camera and I’ll teach you the ropes behind storm chasing.” I was beyond excited! The only thing I really knew about storm chasing was from the movie Twister, but I happily accepted his invitation and a few days later we embarked on our first storm chase.

He came by my house and picked me up around 2pm and we headed out towards Childress, TX. Storms were expected to fire up along the dryline with the help of a shortwave impulse moving through the area. Instability, shear, and moisture were all on the low end. But I didn’t care. I wasn’t even sure about anything in forecasting. I was just excited to be out on the open road and chasing storms. We arrived outside of Childress, TX and storms were going up on the dryline just to our west. We watched these unimpressive towers build up and dissipate out. I managed to capture a few lightning photos during this. Finally, we had a dominant storm and although it wasn’t impressive on radar it was amazing to see in person. Our storm was off the west and we waited observing the storm as it became closer to us. I snapped off several lightning photos at this time. As the storm drew closer I could see some storm structure and a stunning shelf/wall cloud hybrid just to our southwest. The storm had some wild shapes and looked menacing especially to the untrained eye. Jason informed me that we were in the best spot for pictures. 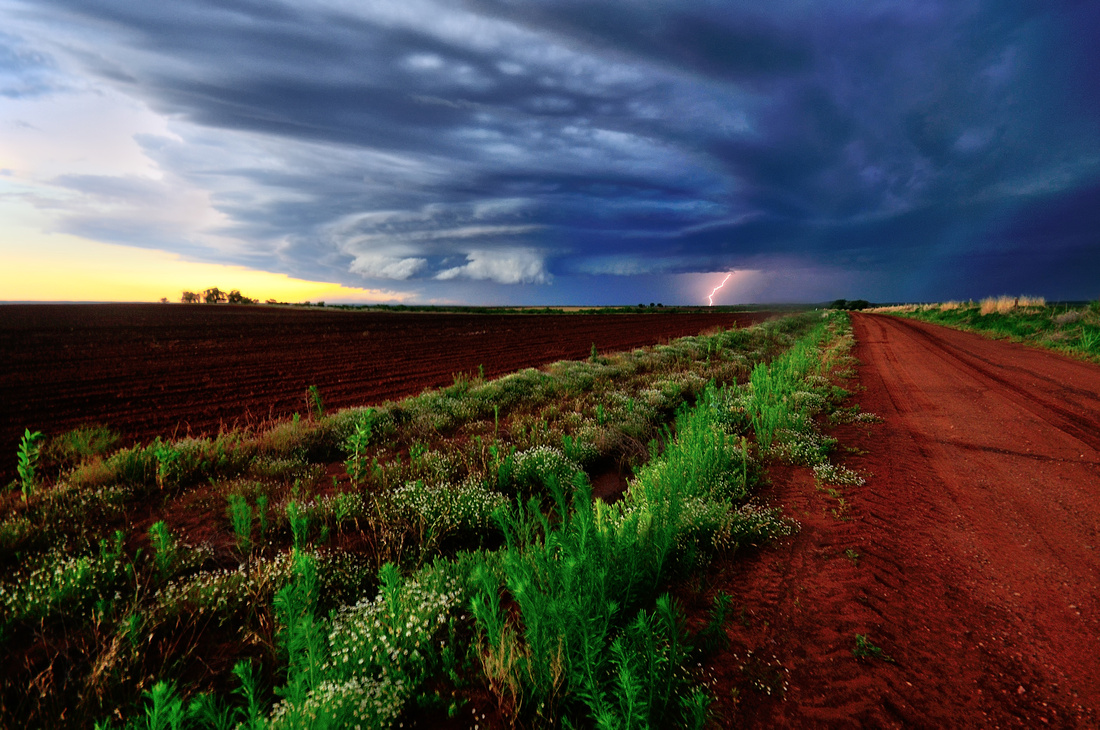 Storm on the Plains

I set up a shot showing the storm updraft. It was a “cinnamon bun” shaped cloud with a blocky non rotating wall cloud and shelf cloud. Light was being filtered through the anvil of the storm and was very soft and even, but the sun was going down and a strip of yellow sky could be seen behind the updraft. A freshly plowed field and a red clay dirt road lead the eye out to the core of the storm where shafts or rain and bolts of lightning met the ground. I fired off a few frames and in perfect timing (and a lot of luck) I caught a single bolt of lightning flashing just ahead of the core. In this photograph the eye is lead in from the natural lines of the grass and dirt road. The inflow bands feeding into the storm also help bring the viewers’ attention to the lightning strike and the updraft. Without the lightning it is still a nice image, but with the lightning we get this flash of warm color interrupting the cool tones of the storm creating tension with the mixture of cool and warm colors. This has always been one of my personal favorite photograhs.  We went on to photograph the storm until after sunset and saw some remarkable storm structure. I still don’t think I’ve seen storm formations like the one’s produced here. Even Jason was impressed and couldn’t really explain what was going on with these storms. The storm eventually came over us and we were met with a photogenic shelf cloud and a massive gustnado on the leading edge.

Jason and I would go on to chase storms into the next season and his teaching was invaluable to me and my photography. He taught me basic strategy for chasing as well as how to identify parts of the storm and I taught him things like composition and exposure. We had some great times chasing and we saw some amazing sights. He passed away in 2010 and ever since then I have chased storms in his honor. He was a great storm chaser and an excellent friend. Thank you for the memories, Jason. May you rest in peace.

My sons and I met you at the Lighthouse Trail in the Palo Duro Canyon a while back. You took some pics of us and gave us some of your water. (Thanks again!) I have been meaning to tell you "great job" on getting published and very nice moves with the blog. My family and I are always grateful and amazed by your pics of the week. They seem to be getting better every week, if that's even possible. I just wanted to let you know that we are some of your supporters, so please keep up the great work!!