I just returned from a four-day vacation in New Mexico, Arizona, Utah, and Colorado and I'm finally getting around to processing some of these pictures. It really was an amazing trip. I got to see the Grand Canyon, Monument Valley, and Canyonlands National Park and so much more. So many photo opportunities and such a short time. But one shot in particular I wanted was to catch the sunset at the Buck Canyon overlook in Canyonlands National Park. If you have never been to Canyonlands I highly recommend you visit--such an extraordinary place! I wanted a location for sunset and after a lot of research I finally settled on the Buck Canyon overlook. My idea was to catch the sunlight hitting the canyon and maybe lighting up the peaks of the La Sal mountains in the background. Buck canyon (like many of the canyons here) looks unworldly. It really feels like another planet.

To get to the overlook you drive north from Moab, UT on to highway 313 and turn on the "Island in the Sky/Grandview Point" Rd that twists and snakes along the rim of the mesa. The views from this height are astonishing. You're over 1000ft above the canyon floor and the Green and Colorado Rivers. The Buck Canyon overlook gives you a commanding view of the impressive landscape. I arrived a little earlier than sunset so I could do some exploring and get set up in time. I first stopped at Mesa arch and photographed the arch and the distant landscape in late afternoon light. This was a fun shoot and the arch made an excellent framing element for the La Sal mountains off to the east. I also stopped to shoot "Candlestick tower" and its incredible view in the late afternoon light. But I needed to get ready and set up for sunset at Buck Canyon.

I got to the parking area of Buck Canyon and was relieved to see no cars there. I might get the whole sunset just to myself. I gathered up my camera gear, tripod, and a bottle of water and made the very short hike to the overlook. Some nice light was starting to hit the western edge of the canyon and I had high hopes it would reach the other side and maybe even the mountains. I climbed over the rock barricade keeping me from the 1000ft sheer cliffs (don't do this, kids!) and set up my shot. I struggled with what composition I wanted to use. What way would I portray the scene? Do I want to shoot wide or tight? I snapped off a few frames trying various lenses and focal lengths until I found the composition I wanted, now I just had to wait for the right light.

This was a peaceful point in the trip. I had spent most of the day in the car driving and navigating to the next location. I would pull up, jump out, snap some photos, and get right back into the car and drive to the next spot. This was the first time I was able to absorb the take in the scenery around me and having it all to myself made it even more special. There were some concerns for this shot, however. The biggest concern was the weather. Some monsoon storms were forecast to move through the area during the afternoon and overnight hours so we did have some cloud cover, but it looked somewhat clear off to the west. I guess I was drinking in the magnificent scenery; I didn't hear the family that came to see the view from the overlook. They startled me when I turned around to check the sun's position. But we talked for a little bit and I informed them that they might be in for a show if they stuck around to watch the sunset. They decided to wait with me but they stayed off to my right as if to not bother me. We watched as the sunlight moved along the canyon below us bringing the canyon into a fiery red and orange glow. The light got about halfway up the other side of the canyon and I snapped off several photos.

Now, this would be the magic time as the sun dropped lower the light would move farther and farther up the canyon and eventually reach the mountains, but that did not happen. We got clouded out and the shot I wanted would not happen. The sun was blocked out by some clouds moving in from the north and threw the whole scene into a dull overcast light. Disappointed, but determined to come back with something, I patiently waited for the sun to break between the clouds. If it did I would only have a few minutes—maybe even seconds—to capture the shot as best as I could. I looked back over my shoulder to see the sun peek through a break in the clouds. I turned my head to my camera so quickly I think I got whiplash and in that instant I pressed down the shutter and was able to squeeze out 9 frames. This was the closest I would get to the shot I envisioned. A sliver of sunset light stretched across the canyon and vanished in under a minute. After this there was no more sunlight and the sun sank below the horizon and smothered the landscape in shadows. Once good thing about this situation was the clouds I had as a backdrop. Instead of a boring empty sky I had some clouds to give the scene more depth and with the right light more drama. You can even see the rain falling on the left side of the frame. This would evolve into a storm I would have to drive through on my way back to my hotel in Moab. While I did not come back with the shot I wanted I did come back with something pretty special. I really like the contrast of the light and dark and the clear and murky parts of the image. Probably my favorite thing is if you look closely you can see some patches of snow on the 11,000+ft La Sal mountain range. I thought this made a nice addition to the photograph and helped give it even more atmosphere. Canyonlands a truly a magical place and I can’t wait to get back out there. Expect to see more photos from this trip soon! 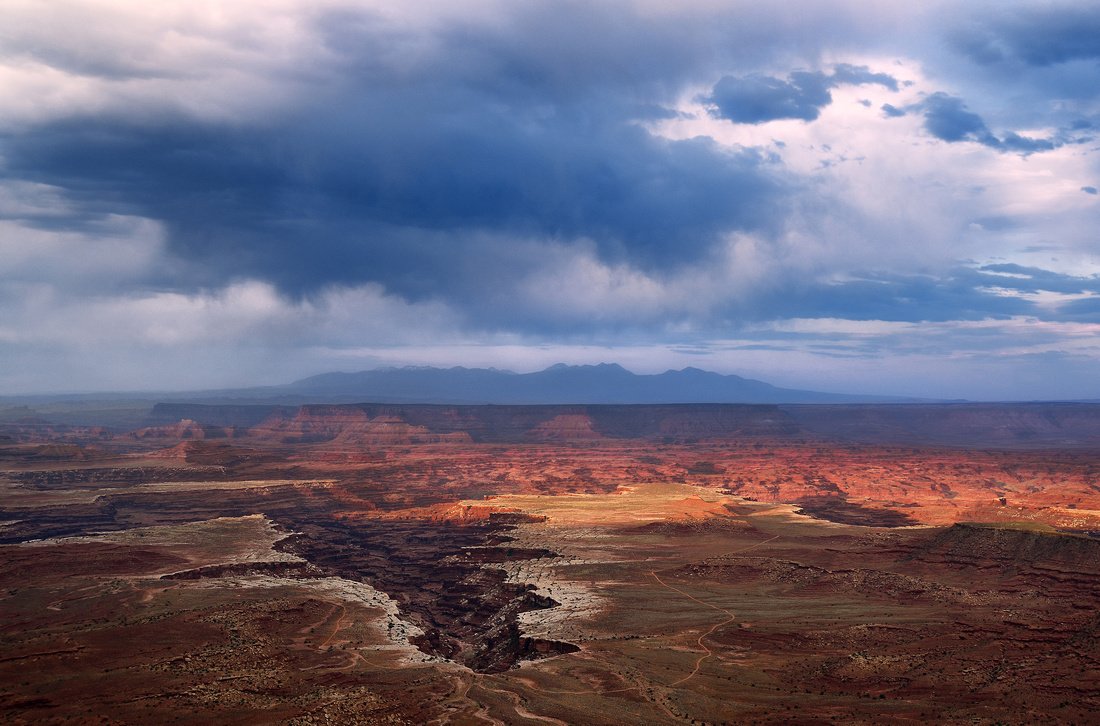 Buck Canyon OverlookEvening falls on Buck Canyon and storms brew off to the east near the La Sal Mountains and Moab, UT.

Marcia Jacobi(non-registered)
Amazing - do not like hearing about the sheer clifts part, though!
Elizabeth(non-registered)
Beautiful. Exciting story. Thanks for sharing.
Larry Dodson(non-registered)
Beautiful scene and well done Ben. I did not get to this place while we were ther last year. I have many, many regrets about my trip. We only had one day at the Canyon and did not see much, would love to go back but at 71 years old it will never happen. Thanks for posting the beautiful photos. May the Lord Jesus, the creator of all these beautiful scenes, bless you and your work!
No comments posted.
Loading...
Subscribe
RSS
Keywords
Pic of the Week nature landscape travel sky Texas Oklahoma night rock weather
© Ben Jacobi
Powered by ZENFOLIO User Agreement
Cancel
Continue