One of my favorite things about nature photography is the element of surprise. You just don’t ever really know how things are going to turn out. Like watching a sunset, you can speculate what you think might happen and then the sun sets and it blows away anything that you pictured. But it can also be ruthless. Sometimes your sunset gets completely clouded out or your sky may be clear and boring. It is after all nature. When given the opportunity I try to plan out shoots. Of course I can’t really plan out specifics, but what I usually go for is a “best case scenario”. This past weekend, for example, I had planned this shoot for almost three months just waiting for the atmosphere to cooperate. I had this idea to timelapse the milkyway rising over a body of water and capturing the reflection. Sounds pretty simple, right? Well there are a lot of factors to consider. The first and probably most obvious would be cloud cover. Can’t see the milkyway if we have cloudy skies. What about wind? Wind can stir up the surface of the water and instead of a nice reflection you can end up with a smudgy blur. Humidity, temperature, availability, access, there are so many things to consider. And like we already discussed this is nature. It is wild. But every once in a while she’ll throw you a bone and if you’re prepared you can come back with something amazing!

I had planned a trip to Copper Breaks State Park and Lake Copper Breaks a few months ago. Copper Breaks is designated as an international dark sky park. What made me settle on this location were a few things. I wanted an isolated location free from cities and light pollution, and I needed a lake that I could have easy access to the north side. The plan was to photograph the milkyway reflecting in the water so I needed to be looking south across the lake. I also needed the water to be shallow and still enough for a decent reflection. I wanted to shoot during the new moon so I could have the darkest night sky possible as well.

So I finally settled on a date and I called my good friend Ian up to see if he wanted to join me. We left Wichita Falls around 4:30pm this was so much later than I wanted to leave. The original plan was to leave around 3pm and arrive to Quanah, TX by 4:30. We could then grab a bite to eat and make the short drive to the park. I was delayed by work and I couldn’t leave until 2:30. When I got to my apartment I called Ian and told him to come sooner if possible. I wasn’t really paying much attention to the weather and was shocked to see a thunderstorm heading my way. The storm hit and I got winds around 60mph and torrential rain. It was actually kinda cool getting to watch a storm and not having to leave my apartment. My only concern was as the storm moved through town Ian might be delayed. Well, it turned out he was and I called him to warned him about the rain and high winds, but he finally made it to my apartment we loaded up the gear and headed out.

We stopped for a quick bite to eat at the Subway in Quanah, TX around 6:00pm. We reached the park by 6:30pm and headed to our campsite. We set up our tent and quickly drove down to the lake to search for milkyway locations. The park rangers in the office offered us some suggestions on where we could set up to catch a reflection shot. They didn’t seem too optimistic on our chance of capturing the reflection in the lake. We did a little bit of scouting and found the designated swim area looked to be the best spot. Once we decided on our location we went off on a short hike to photograph the sunset.

After our sunset shoot it was time to get ready for what we came here to do. The milkyway was going to start rising after 10:30pm and around 10:00 we left our campsite and drove to our location for the shoot. The lake was perfectly still. The sky was completely clear. And the stars were so big and bright. It was absolutely perfect and serene. We set up our cameras and timelapsed the sky until 3:00am. This was one of the best views of the milkyway I have ever seen and not only was I capturing it in the reflection of the lake, but we were accompanied by dozens of fireflies. Some would fly right in front of the camera lens and leave a bright green streak on the image. It was fascinating watching them shimmer on the edge of the lake almost mimicking the starry night sky above. What a beautiful and peaceful moment. After months of planning and waiting I was finally able to get the capture I had hungered for. A stunning view of the milkyway with a near perfect reflection in the lake below. Such a remarkable scene… 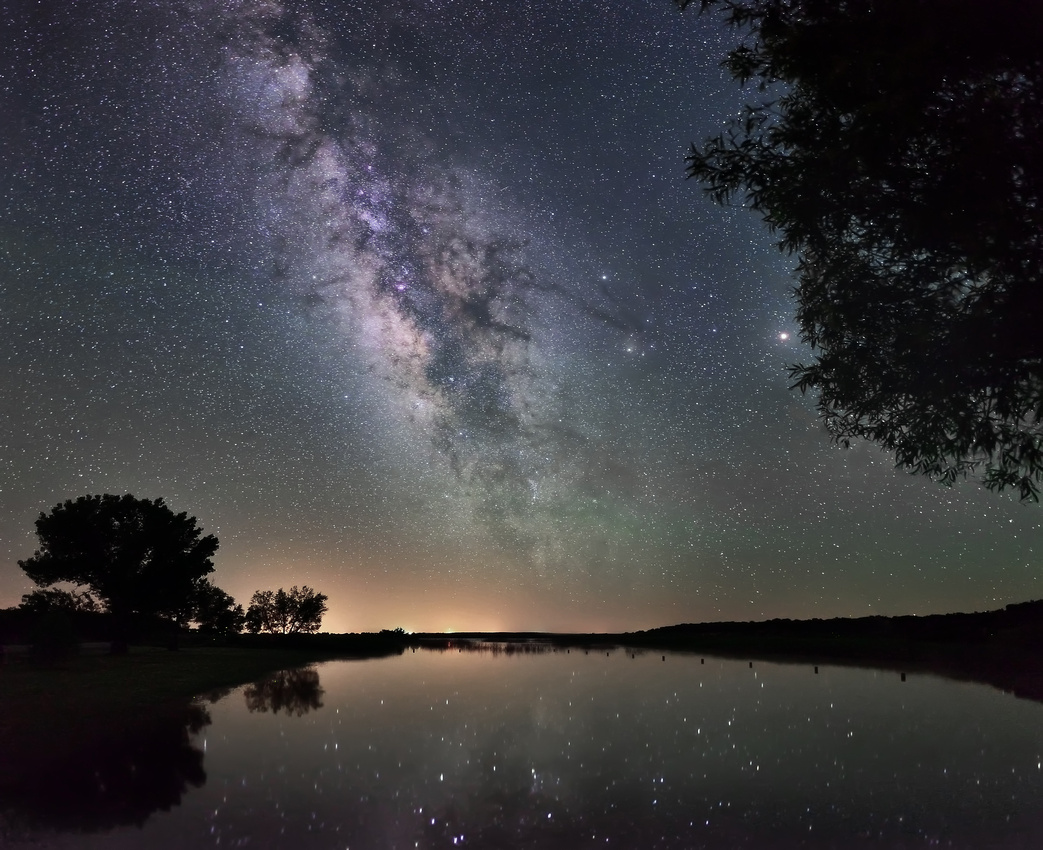