I returned this week from attending the funeral of my Aunt Becky. She passed away after a two-year battle against cancer. And she shared her passion for nature and hiking with me. In 2005 and 2006 I spent a few weeks during summer staying in her home and hiking and exploring the Adirondack Mountains. As a way to pay homage to this incredible woman I retraced our old steps and visited our past locations. Thanks to the Internet and some of my own memories, I was able to find our old spots. It was really different visiting these places and not having her behind me telling me facts about the Adirondacks. She had a passion for teaching and I learned so much about the area she called home. I will sure miss her.

Now I have been to the Adirondacks before, but it was always during the summer. There's quite a bit of change from summer to winter in that region. The landscape transforms from a lush green forest to a bright white sheet. It almost looked like someone spilled liquid paper over the area and it was very different to this Texan. We have a winter here, but it’s nothing like up there. We get cold days and some snow, but not to the extent or extreme of the north country. So it was going to be interesting seeing these locations during the winter.

Which brings us to this week's Pic of the Week. One of the spots I remembered seeing was Monument Falls. During my 2005 trip we made waterfalls the main theme of my stay. We photographed several around Adirondack Park. But I remember Monument Falls more for two reasons: 1) It wasn't that impressive to me and 2) In order to get a good shot I had to carefully climb a rock perched just over the Ausable River and right next to the highway. If I lost my balance, I'd either fall into the river or fall on the highway and possibly into oncoming traffic. So I was ready to get the shot and get back to safer ground. I was so focused on not falling that I failed to the see the peak of Whiteface Mountain towering over the trees. Whiteface is the fifth highest peak in NY and it is one of the forty High Peaks of Adirondack mountain range. It stands at an impressive 4,865 ft elevation. As a landscape photographer I always felt a little guilty with how quickly I rushed that shot and failed to recognize the scene around me. Now fast forward to this past Friday, and my father and I are bundling up to brave the cold weather for the sake of nostalgia and photography.

When I woke from my sleep at 6:30am I opened up my smart phone and checked the infrared satellite and radar. We had a slight chance for showers and snow showers in the morning before the front arrived and the clouds cleared out. I had hopes of capturing fresh snow on Whiteface Mountain then the clouds clearing out and getting some nice sunrise light on the peak of Whiteface. I looked outside my window to compare the real world with the satellite images I was checking. A fair amount of snow was falling, but this wasn't a Texas snow--this was a New York snow. Very large snowflakes were falling from the gray sky and delicately landing on the roads, walkways, and vehicles in the parking lot of our hotel. Despite the cloud cover and falling snow we got in our car and began the 50mile drive to Monument Falls. The drive was amazing snow was hitting against our windshield and accumulating on the road shoulder. And the whole area was transformed into a winter wonderland. As we approached Whiteface Mountain the snow started to pick up and it was almost impossible to see the mountains that were now in front of us. We pulled off the side of the road to photograph the scene. I had to squint to make out the edge of the ski trails of Little Whiteface Mountain as the snow was getting thicker. After I was happy (and a little too cold) we continued down the highway for our next stop. We paused in Wilmington to photograph the frozen river and another waterfall there. And then we moved on to our main sight Monument Falls.

Up to this point it was starting to look like the sky wouldn't clear at all and I wouldn't be able to see the mountains with snowy peaks, but as we got closer the clouds started to thin and patches of blue sky appeared in front of us. We arrived at our location and I was surprised to see the falls still running given that all the water we've come across was frozen. We parked our car on the pull off along the highway. The whole parking area was covered in ice and I carefully walked across the ice to search for my composition. It was at this time the clouds started to break and I could make out Whiteface Mountain, the peak however was still covered by the clouds. I walked out to the edge behind the guard rail and turned back towards the south to see Monument Falls. I looked back the opposite direction and saw the rock where I stood 10 years ago. It was now coated in a thick layer of ice. I watched it glisten in the sun when light broke through the clouds. This time I would face away from the falls and let My eyes follow the river and up the slope of Whiteface. Some clouds had moved out of the way and I could start to see snow and icy trees closer to the peak. I waited outside braving the cold wind and standing in ankle deep snow watching and waiting for Whiteface to live up to its name. Finally, the clouds cleared and early morning light spilled on the peak lighting it up like the star on a Christmas tree. I quickly pulled my eye up to my camera, checked my exposure, and began shooting. I must have looked pretty interesting to the drivers on the road. I would snap a few images, then rotate the camera, then run back to the car and grab another lens, then shoot some more, switch lenses, rotate camera, jump up and down in excitement, almost slip on the ice, and shoot more photos.

When the clouds broke and I was able to see the peak of Whiteface I was in awe. The peak was engulfed in snow and ice. I could even make out the castle and observation tower reflecting brightly in the sun. To think I was just there a few years ago during the summer and we made the drive up to the mountain summit--a road now impassable in its current condition. I stood there watching the light dance up and down the peak and the clouds overtaking the summit while the Ausable River flowed and rolled turning into Monument Falls below. It was a truly remarkable scene and I feel like Aunt Becky would be very happy to see me so excited to photograph it again. We continued on our trip and photographed all the locations on my list. It was a lot of fun looking back on these places and remembering the good times once again. I think it was the best way for me to say goodbye to her and pay tribute to a woman who had such a great impact on my life. I love you and I will miss you Aunt Becky. 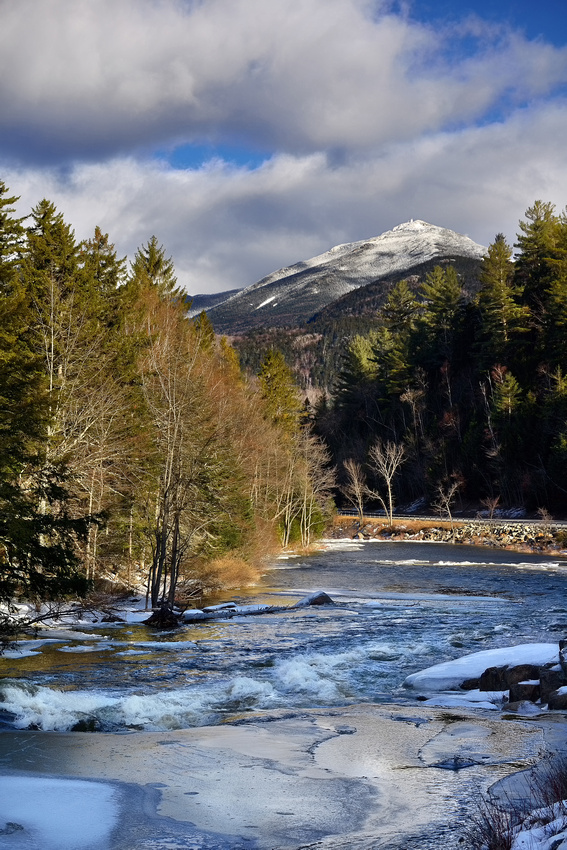 Monument Falls and WhitefaceWhiteface Mountain covered in snow and the icy Ausable River as seen from Monument Falls near Wilmington, NY.