It has been two years since I last photographed the Geminids meteor shower and after the less than average Perseids shower in August, I was once again ready for hunting more meteors. This year was going to be great year for the shower. We were forecast to have clear skies and a crescent moon that would only break the horizon after 4am. The best time for the shower would be when the radiant was highest in the sky around 1am that night. This gave us over three hours of shooting and counting meteors. After the first two hours, I lost count at 250. The show was quite impressive. I was excited for the shower, but I knew I had work the next day so I needed to find a location that was under a 2-hour drive. I could have gone with my usual west TX dark skies such as Caprock Canyon or Copper Breaks, but I wanted to try a new location I hadn’t shot before. After some research, I settled on Great Plains State Park in southern Oklahoma. The main reason I did this was the park access is open 24/7 and it has relatively low light pollution. I spent a few days looking over the area on Google Earth and gathering information about the location.

I had invited a few of my photographer friends to join me, but the only one that was able to make it was Jaden Corbin. We left Wichita Falls around 9:30pm that night and started off towards Oklahoma. Along the way we spotted a few meteors zipping across the dark skies. We reached the park entrance and looked around for a little bit. I had an idea to photograph the meteor shower over the lake, but the light pollution across the lake was too strong to get any usable shots. I had been to Great Plains State Park before (though not at night time) and remembered a small overlook of some the mountains and Snyder Lake on the west end of the park. This would be my backup if the lake photos would not work out. We drove to the overlook and parked our car and stared at the starry night sky above. The constellation Orion was hovering over the mountains and shone in all its glory. You could make out the belt, arms, and bow of the great hunter. Behind us the milky way was dropping below the western horizon as Cassiopeia, Ursa Major, and Ursa Minor sparkled above. We set up our tripods and cameras and shot photos from this location for almost three hours. During this time, we watched as the skies became littered with streaking meteors radiating from Gemini and spreading all around us. We would be talking about a particular subject and be interrupted by the other person calling out the meteor count. While the skies were clear there were some thick clouds way off in the south and west and wind picked up after midnight. The air coming off the lake was frigid and I would jump in place trying to stay warm. The thought that I could be home and snuggled up in my warm bed seemed to overcome my desire to be outside in the cold air, but then a green flash would appear and a meteor would stretch through the scene and ignite the sky and my desire to photograph again.

At the end of the I sat in my car warming up by the heater and looking over some of the photos. I had seen a few decent ones, but once I got home and looked at them on my computer screen I was ecstatic at the number of meteors I captured. Like usual, I opted for a time-stack composite image where I take all the meteors I captured and add them into a single frame. This method lets me show the entire event in just one image. Some people have their reservations on whether this is “true” photography. Personally, I think it’s the only way I can convey what we experienced and I hope it inspires people to get out and watch it themselves.

It took a total of 55 images to create the final version and there are 53 meteors visible in the photo. I did take some “creative license” in the placement, but that was mostly to avoid intersecting meteors and help the image flow. Interestingly, I decided to use an exposure with the car lights on for the foreground. This was not my original intent or idea when I planned this composite, but I think it adds a little more depth and perspective. The reflected light also helps bring out the mountains and lake in the background. I am glad I got to photograph this meteor shower and I’m very glad the weather cooperated with us and we ended up with some nice images.

Enjoy and have a Merry Christmas and Happy Holidays! 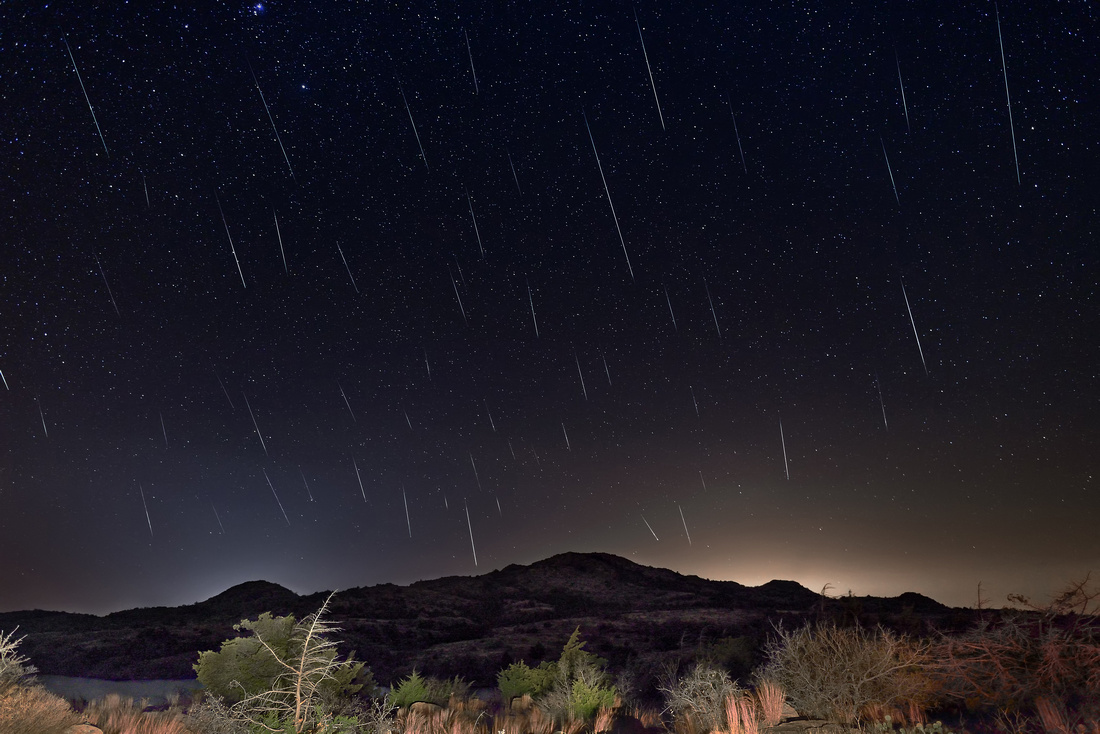 Jerry(non-registered)
Ansel Adams "made" all of his images. Having read his autobiography I have no doubt that he would have taken full advantage of digital photo editing software if he had lived to this photographic age. Do not feel that you have to explain why you took advantage of current tools to create this fantastic image. Well Done. Wish I had been there!
Nathan Dooley(non-registered)
I love your work! Awesome stuff!
Elizabeth(non-registered)
Beautiful. So exciting.
No comments posted.
Loading...
Subscribe
RSS
Keywords
Pic of the Week nature landscape travel sky Texas Oklahoma night rock weather
© Ben Jacobi
Powered by ZENFOLIO User Agreement
Cancel
Continue