When I explain storm chasing to people I always lead with “Storm chasing is 98% frustration, aggravation, and depression and 2% pure adrenaline and insanity”. This is really the only best way I can describe it. After all, majority of my storm chases are spent driving to the target area and waiting (and hoping) storms initiate. I couldn't find a better example of this than May 19, 2015.

I had left work a little early to pursue some thunderstorms that were moving in to Jacksboro, TX (50miles south) and given the parameters suprecells, with possible tornadoes, were likely. After arriving to Jacksboro, I found a nice spot just outside of town and pulled over and waited for the storm to arrive. Due to the high moisture content and low clouds, visibility was less than impressive and I only caught a glimpse of the storms updraft before needing to get out of its path. I continued down 114 heading west chasing after new storms that formed along a boundary. At one point I was parallel to the storms updraft and wall cloud. It hung just above the ground with its tendrils dancing around skirting the surface, but it was quickly wrapped up in the wet RFD and I lost all visibility on the storm. With no road networks that would get back in position I decided to abandon the storm. Distraught and upset that today was going to be a bust, I started back towards Olney, TX and then north on Highway 79 to get back home. While chasing I noticed an increase in lightning flashes on a storm to my north. I would've checked the radar, but this area is notorious for spotty cellular coverage. So I was limited to visual observation—at night.

As I came into Olney the lightning really picked up and precip started to fall. “No big deal. I've core punched before” I thought to myself I pressed through the storm. “Besides, its just now developing so it shouldn't be that large of an area. I'll be out of the precip in no time.” The rain increased from a heavy downpour to a strong torrent. Rain was blowing in sideways and would fall in bucket loads. I knew there was a chance for flash flooding and the road I was on would flood pretty easily so I kept pressing forward. Lightning was going off in every direction and the booming of the thudner reverberated in my chest. Then the rain transitioned into small hail as I got closer and closer to the core. Pea to dime size-hail began to fall on my vehicle. The sound of hail hitting the vehicle made me anxious, but I kept pressing forward. I knew that I was just on the outside edge of the core and maybe I would be able to beat it before it passed over the highway. I was wrong. The strong wind gust, flooding rains, and hail kept me from going at normal highway speed and I quickly got caught in the core. Harmless dime-szie hail almost instantly transformed into golfball-size (1.75in). This stuff can damage your car and with the right amount of force it can easily knock out a windshield. I pulled over on the side of the road frustrated that I couldn't go any further and would have to wait for the storm to pass.

It was starting to get late and I was tired, hungry, and drained from the chase. “What a perfect way to end this chase”, I sarcastically murmured. As the hail and rain finally began to let up the wind started to increase, but this was no run of the mill outflow wind, this was different. It was inflow. I was now in the inflow notch of the storm and I'm not exactly sure why but something in my gut was telling me to turn around. The wind howling as it cut through the prairie was haunting and something just did not feel right about my location. So I listened to my gut and pulled back by about 1/2 mile. I pulled over to see if I could get a better view of the storm. The only time I could see anything was during the brief flashes of lightning, but there was one flash that revealed everything I needed to see. A low, LOW wall cloud was scraping the ground and twisting up into the storm. I watched as the menacing wall cloud churned above a local wind farm tightening up into fingers that spun around the base. Sometime after 11:30pm (I know I call this “Midnight Twister” though), one of those fingers consolidated into a cone and reached the ground just a mile or so to my northeast. Right where I was heading before I turned around. The tornado was only on the ground for a few minutes I managed to snap only a few photos. This one was with my 20mm wide angle lens so you really have to look for the tornado. After I shot this image I switched to my zoom to see if I could get a closer shot, but I was always drawn back to this one. I like how the tornado sneaks in there almost undetected and that is exactly how I experienced it. That storm and tornado snuck up on me. I am glad I listened to my gut as it helped keep me safe, and also capture my fist photogenic nocturnal tornado. I reached for my phone to report this to the National Weather Service, but found that I had no bars or signal at all. I said a quick prayer for those in the path of the storm and hoped there were other chasers/spotters watching this. The storm finally passed and I was able to drive back to my apartment in Wichita Falls.

The next morning I checked the storm reports to see if anyone else was on my storm and no report whatsoever showed up. Not the wind, hail, or tornado. I submitted my report to the NWS describing the best detail I could remember about the storm. From what I understood there was no damage reported and no injuries. It certainly was an interesting chase that day, but I'm glad I didn't come back empty-handed. The storm season is just about starting up and I hope that 2017 offers me more opportunities for storm chasing. I also hope that I will listen to my gut when it tells me to turn around! 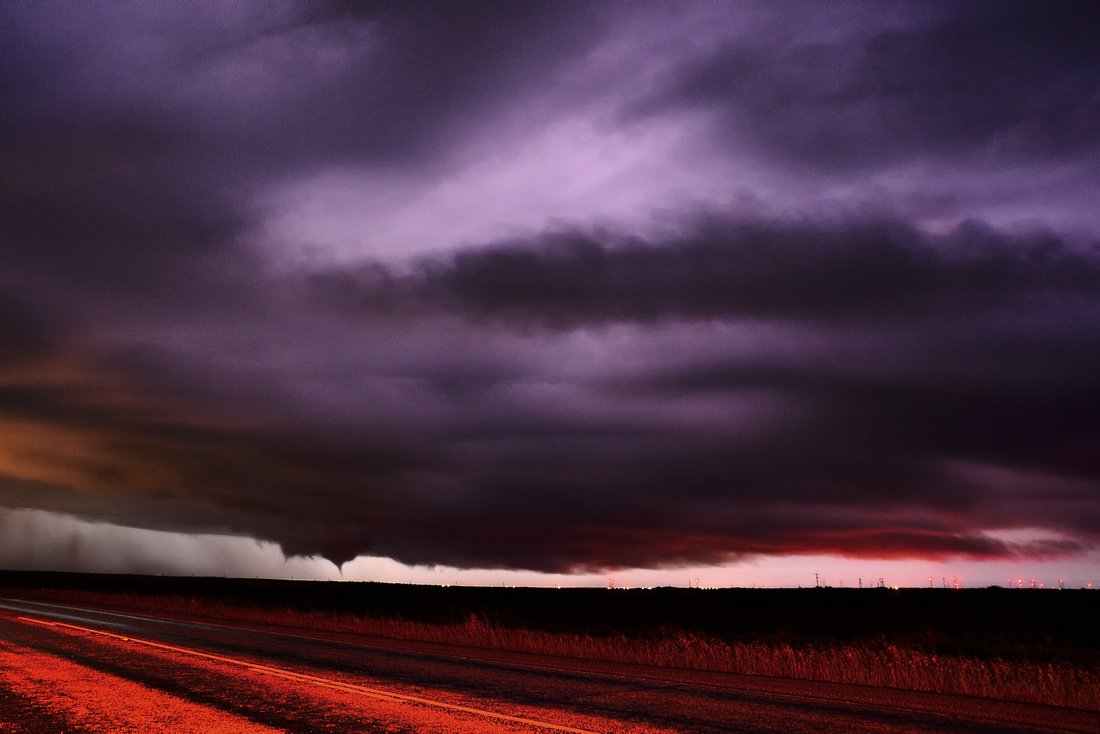