Oh, where do i begin?... Earlier this week I returned from a three day trip photographing some of the stunning landscape and natural wonders of the Texas hill country. I had never really been to this part of Texas before, but I've always been intrigued by the area. Needless to say, it was incredible! The rolling hills, impressive waterways bisecting the landscape, and wondrous fields of wildflowers really tugged at my heartstrings. Not to sound too dramatic, but it was one of the most beautiful places I've been to in Texas. My mother Marcia Jacobi accompanied me on this photo adventure. It has been almost three years since our last photo trip (Arkansas 2014). So it was nice to get to share these experiences with my mom. She was a real trooper too, we hiked a little over 7.5 miles throughout the hill country. We stayed in a hotel in Marble Falls, TX just across the Colorado River. Marble Falls was a good location because it was centered around all of our destinations. We arrived just after sunset Saturday evening to our hotel in Marble Falls and got some good rest in for the next day. Sunday was going to be a busy, busy day.

Our plan was to leave around 6:00am and drive 1hr 15min to Bend, TX where we would turn down some backcountry roads and stop at Colorado Bend State Park. Not to get too much into those details, but we hiked to Gorman Falls which was absolutely breathtaking and after playing around near the Colorado River and Spicewood Springs we left Colorado Bend State Park. The next stop was an area I didn't know that much about, but some research on the internet led me to this destination. Westcave was our next stop. We drove back through Marble Falls and headed east going towards Austin, TX. When we reached Westcave I was upset to learn all the tours were booked up for the day and that meant we would not be able to get to photograph this area on this trip. They only do guided tours on Saturdays and Sundays. A little distraught, we left the Westcave parking lot and started to our next destination Hamilton Pool. It was close enough by, but I was worried we were going to have to wait in line for hours and we would miss sunset at Pedernales Falls (our next stop). Thankfully, the wait was on 15min and we were in and out by 5:30pm. Hamilton pool was spectacular, but being such a unique and beautiful setting it is overwhelmed with tourists. I know I'm going to be spending a lot of time photoshopping people out of my shots at Hamilton Pool. We got back in our vehicle and started off to our last stop of the day Pedernales Falls State Park which was about 35 minutes away.

If I'm being perfectly honest, I didn't know what to expect with Pedernales Falls. I had done some internet research and it seems everyone enjoys it there, but they do more recreational activities such as swimming and fishing, not photography. I had seen some images of the falls overlook, but it didn't really impress me. I don't know if it was the lighting, the photographer, or whatever, but the images I saw left a lot to be desired. We arrived to the entrance of Pedernales Falls and followed the narrow park road for a few miles before coming across the parking lot to the falls overlook. After a brief hike we reached the overlook and I was shocked at how beautiful the river and waterfalls were. The Pedernales River was cuts through the ancient limestone rocks and drops 50ft over a length of 3000ft down river. This creates a beautiful flowing river with two main waterfalls. The higher being Upper Falls and the lesser Lower falls just below. Upper Falls cascades down about 20ft and Lowerfalls only drops around 10ft. While these heights aren't as impressive as the seventy foot Gorman Falls or as dramatic as the 50ft waterfall at Hamilton Pool, they are no less beautiful. After shooting some images of the overlook I wanted to get a closer look at the falls. Following a stone stair case I descended down to the shores of the Pedernales River. I quickly ran up to photograph the falls, but I really wanted to find my shot for sunset. The sun would be setting in about an hour and I wanted to be ready in case the clouds broke and expose some nice sunset light. Thanks to some earlier research I found a spot on Google Earth that looked like some rapids or a whirlpool just to the east of the falls. I could see this feature from the overlook and watching the water surge through the narrow pass I thought it would make for a nice long exposure photograph. I started heading to to east along the edge of the river and clambered up some rocks and did some boulder hopping before arriving to the area. It turns out I could've taken an easy footpath down the other side of the overlook and end up in the same spot, oh well. I did a little bit of exploring and I came across the wash. I watched as the river came rushing through at a fairly high speed. This made an audible roar that rivaled Upper Falls and I knew I had found my location for sunset. Now it was time to find the right composition and play the waiting game.

I set my camera and tripod up and took some test exposures to get a feel for the composition I had chosen. There was now some breaking up of the clouds to the west and southwest so I settled on my lens choice, angle, and horizon placement. Now I just needed to wait for the light. There were times when it looked like we weren't going to get any color in the sky and maybe not even see the sun, but I remained hopeful and right before the sun fell behind the horizon a brief gap in cloud cover sent a ray of golden sunset light shooting all across the river and directly onto my scene. The light reflected off the limestone rocks and the rushing waters of the river and the golden yellow contrasted nicely against the green turquoise color of the water. I shot off several exposures during this time taking advantage and trying to soak up as much of the light that I could. It was remarkable and I knew this was going to be the first real image I shared from this trip. So many times I was impressed and surprised at the beauty of the hill country, but I really don't think anything compares to the emotional feeling I got during this shoot at Pedernales Falls. I have many more photos that I will be processing in the weeks to come and I'm excited to share these all these exciting images with y'all. You will be hearing from me soon! 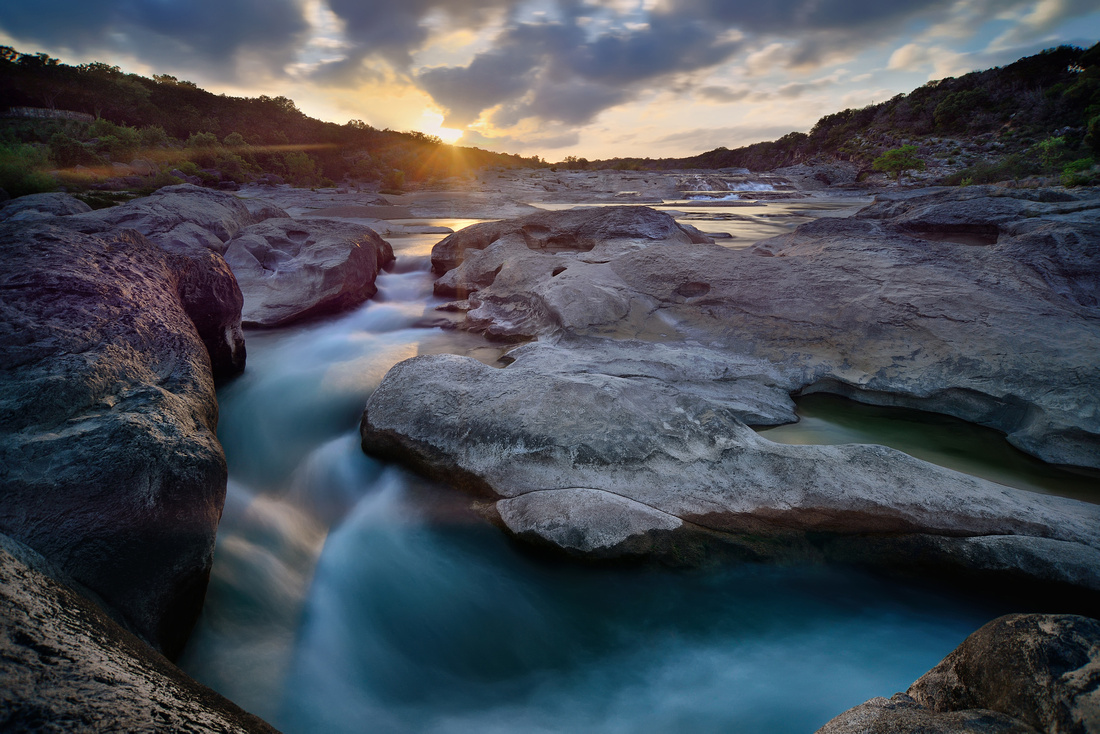