I remember the very first time I saw a photo of Hamilton Pool. It was on a “Only in Your State” website with some cheesy click-bait headline like “The Most Unbelievable Swimming Hole in Texas” or something to that effect. I must admit that their click-bait title tactic worked because I clicked on the link and opened the article. An image of the waterfall was placed as a banner at the top of the article and in big blue letters the title read “Hamilton Pool”. I scrolled down ignoring the article and went straight to looking through some of the pictures. I was in awe. I remember one shot in particular, was a straight on view of the falls. The photographer used a long exposure that turned the trickling falls into beautiful curtains of water that fell into a stunning emerald reflecting pool below. It was a morning shot and some nice light was hitting the grotto on the left side revealing all the ferns and vegetation growing on the underside of the crazy rock formation. It was mesmerizing, the beauty of it all. I thought to myself and learning about this location (I finally read the article) “I’m going to photograph that soon.” That has been about five years ago and as the years went by I started to see more and more photos of Hamilton Pool. Some of my photographer friends I follow on Instagram and Facebook would post their photos of the waterfall making want to visit even more. It wasn’t until earlier this month I got to visit and photograph this natural wonder of the Texas hill country. And I must say, if you live in Texas you need to go visit this spot!!!

When we started planning this trip I knew I was going to include Hamilton Pool, but I just wasn’t sure when to photograph it. I knew due to its popularity we wouldn’t want to be out during the afternoon so the idea I had in mind was to photograph in the morning and arrive early and be the first person in line. So the plan was to photograph it Monday morning that way we could sleep in a little and hopefully most of the weekend crowd would be gone. That is not what happened though. On Sunday morning, my mother and I drove to Colorado Bend State Park to photograph Gorman Falls. That was actually the Pic of the Week last week (http://bdjphoto.com/blog/2017/4/pic-of-the-week-4/20/17).  After our trip to Colorado Bend State Park we got some lunch and headed toward our next stop. We were trying to get to an area known as West Cave which was just west of Hamilton Pool. It is also a nature preserve and the cave/grotto is only available through guided tours they only do on weekends. Our plan was to get there in time for the 4pm tour which was the last tour of the day. This was also the only tour we would be able to do during this trip. We arrived to the entrance of West Cave and the parking lot was packed. People were running about getting to the visitor center and checking in for tours. Mom let me out of the car so I could make our reservation while she parked. I went in to the visitor center and talked with someone behind the tour registration desk. She gave some some disheartening news: ALL TOURS WERE BOOKED SOLID! I was understandably upset, but not that surprised judging by the number of people there were. Mom thankfully couldn’t find a parking space and as I walked out she was driving back around. I told her that we couldn’t get on the tour and we should just move on to our final stop of the day Pedernales Falls.

I had mentioned to mom that Hamilton Pool was close by and that we would be going there tomorrow morning. Mom thought since we were close we might as well just try to get in to Hamilton Pool. I remember thinking to myself “If we can’t get into West Cave how in the world would we get into Hamilton Pool?” I had heard stories of people waiting in line for hours to get access to the trail. I really didn’t want to do that I was concerned we would miss the sunset at Pedernales Falls, but mom convinced me and we drove a few miles to the entrance of Hamilton Pool.

There was a sign outside the gate that read “CAPACITY LIMIT REACHED” and we could see a line of cars stalled outside the park entrance. I was starting to get worried. I didn’t want to be stuck here waiting in line and missing my sunset shot at Pedernales River (which was the Pic of the Week two weeks ago http://bdjphoto.com/blog/2017/4/pic-of-the-week-4/13/17). We got in line and waited after a few minutes the line started to move and I could see around the corner of the road it was the trail parking area. Maybe we wouldn’t have to wait as long I thought. The line slowly crept forward and a member of the park staff came up to our vehicle and explained some of the rates and rules to us. Several car lengths later we were at the entrance gate. The park staff told us we just needed to wait for a car to exit and then we could park. We paid our entrance fee and waited for a few minutes before pulling into our parking spot. All together we didn’t wait 15 minutes, which was a whole lot less than I was expecting.

We parked the car and I hurriedly got my gear out and we started off on the trail. People from all countries and cultures were walking on this pathway some heading back up and others going down. Although I was beyond excited that we were getting to photograph Hamilton Pool, I was worried about all these other tourists and how they might affect my shots. After all we had just spent the morning isolated and surrounded by bliss at Gorman Falls, but this was looking rushed and chaotic. The trail was mostly easy; there was a steep descent along some rock stairs before leveling out at the creek. Then a short pathway to a metal stair case down to the waterfall and pool. While the trails were simple the congestion and traffic made it go a little slower, but we eventually made it to the waterfall.

It was now 4pm and I was behind the waterfall and just starting to get under the grotto I had an cool shot close up of the falls and the beach in the background, but tourists were hopping on a rock directly underneath the waterfall and getting in my shot. They did this despite the park staff’s warnings about “high bacteria content in the water” which actually closed the pool to swimming. This is how the rest of the trip would go for me. I would set up a shot and wait for tourists to pass by and move out of the frame. On several occasions, I moved off the trail and on some rocks to get away from the tourists and then they would walk right in front of my camera while I was taking a shot! I was frustrated by this, but sure beauty that was in front of me helped block everyone else out. I was patient, calm, but annoyed. I pressed on and was able to get some excellent shots, but I knew I would be spending a lot of time in photoshop removing all the tourists. I reached a point along the trail where I stopped dead in my steps and found the “winning” composition and shot I wanted. Once again I had to wait for the tourists, but the scene was just perfect. I had just the right angle to see the full waterfall unobstructed by the grotto. The grotto itself made an incredibly leading line for the waterfall and the moss-covered stalactites made an excellent anchor point in the frame. Below the grotto was the stunning reflecting pool in all its turquoise/green splendor, the waters were not perfectly still and the rocks around the shore created turbulence in water. Using a long exposure I was able to exaggerate some of the movement of the water forming an almost whirlpool effect to the surface. This added even more energy to the photo and mirrored the curvature of the grotto above. We finished out the trail and returned back to the parking lot just before they closed at 5:30. We continued on to our last stop of the day Pedernales Falls State Park. Despite the crazy tourist traffic I left Hamilton Pool feeling recharged and ready to make more awesome photographs.

While Hamilton Pool was not my favorite stop on the trip (it was because of all the tourists if I had it to myself I’m sure it would’ve been my favorite) it was still one the most beautiful places I have ever photographed in Texas and with a little post processing magic, all those annoying tourists were no longer an issue and I ended up with a shot that I feel captured the mystery and tranquility of this iconic hill country destination. Thank you Mom for convincing me to go there! 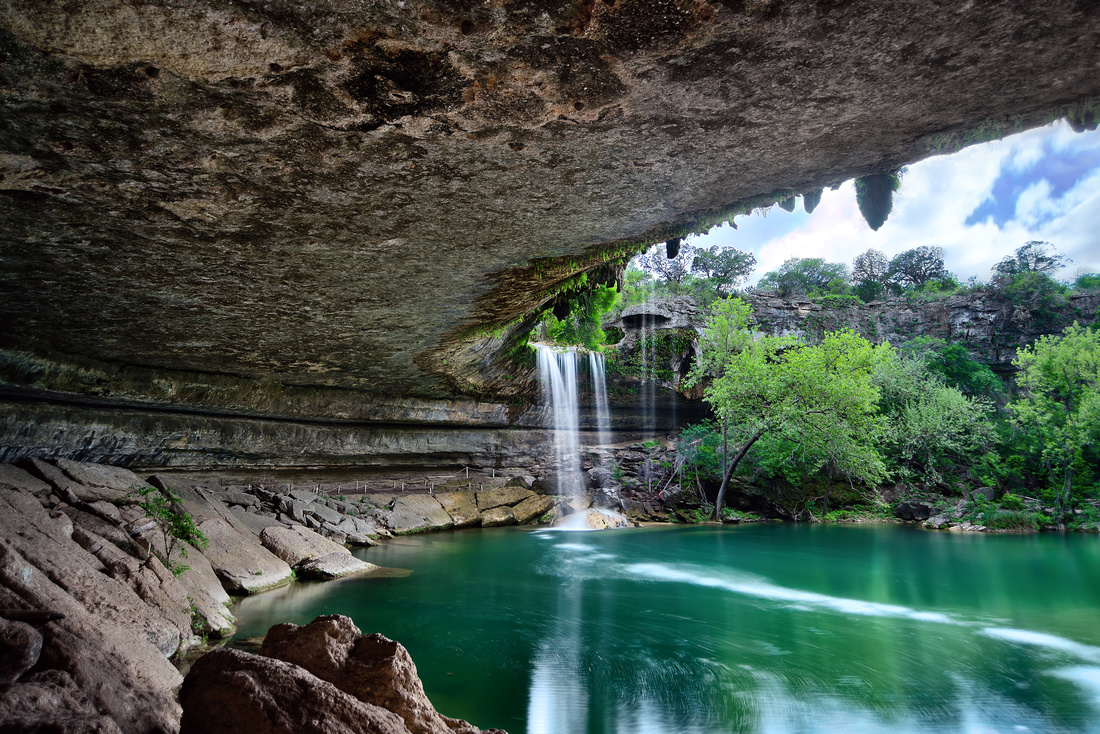