This Memorial Day weekend I didn’t really have any plans to do any photography. I knew there would possibly be storm chase, but I was concerned it would be in the “jungles” of southeastern Oklahoma and Arkansas. So, I was just hoping to catch up on my backlog of edits. But when my friend Kyle Gese (http://www.mykgphotography.com) wanted to go hiking and do some photography I started to think about possible shoots. As the weekend approached we changed from hiking and photography to a road trip and milky way photography. I chose this for a few reasons, but the biggest one’s were the probability of cloud cover over area, and the fact that if I’m going to hike in 90+ temperatures than I want it to be worth it. Quite frankly, I can visit the Wichita Mountains almost any weekend. So we instead started searching for a location for milky way photography. A shot that I have been planning for a while came to mind, and if I was going to teach him milky way photography then we would need to find the darkest sky in our area. And that led me to Caprock Canyon State Park.

Caprock Canyon State Park is located just north of Quitaquae in west Texas. It is about a 3hr drive from Wichita Falls. The park is a whopping 15,314 acres in size making it the third largest state park in Texas. Ancient waters carved through the landscape creating the amazing canyons and bluffs in the park. Looking over the canyon and observing the majestic red quartermaster speckled by patches of scrub oak and juniper trees it’s hard to believe this is in Texas. Caprock Canyon is also home to the official Texas State Bison Herd. Per the TPWD this herd was one of the five foundation herds that saved this animal from extinction. Though they are acclimated to people they can be unpredictable and dangerous (Kyle learned this on the trip). Aside from the rugged natural beauty and the majestic Texas bison herd, there is something else that draws a lot of tourists, especially photographers, each year. Caprock Canyon is isolated and remote enough that it offers some of darkest night skies in the region. This would be the reason we made the drive to the park.

The idea was to explore areas around the Honey Flat Campground. Looking through Google Earth I could find a bend in Holmes Creek that almost looked like a small version of the infamous Horseshoe Bend in Arizona. While I had never been to this part of the park before, I have had this shot in the works for a little over a year. The milky way would be rising in the SE horizon just after 11pm and if we could find a composition that would work with the bend in the creek I thought it would result in an interesting image. We arrived at Caprock Canyon just before 6:30pm which gave us 2hrs of sunlight to scout out our location and maybe shoot the sunset. We pulled into the Honey Flat campground and were greeted to tourists enjoying the park in their tents and RV’s. We followed the Canyon Rim trail and then turned off on a game trail that led us to edge of the cliffs. Peering over the cliffs was intimidating, it was a straight vertical drop about 120ft to the dry creek bed below. Not as scary as the 1000ft drop of Horseshoe Bend, but we would be doing this in complete darkness. After some searching and backtracking we finally found the overlook that gave us a great view of the bend in the creek and to my surprise it actually looked similar to Horseshoe Bend. I was sold on the location, but I knew it was going to be a tricky composition. We would need to have the cameras close to the cliff edge to get the angle of the creek below. My approach was to do a series of horizontal images and stitch that into a vertical panorama. Once Kyle and I were happy with our location we started back to the car.

Here is where things got interesting. After passing through a campsite we turned to look for our vehicle by the road and were met with a large old bull. The bison was trotting along the roadway and tourists were taking photos of him and I guess he got spooked and started to take off towards us. Now, I have had some experience with bison from the Wichita Mountains, but I have never had one charge me. I backed away slowly and warned Kyle not to run. The buffalo started moving closer and I stepped behind a trailer in the campsite. Kyle was ahead of me and couldn’t get behind the trailer, so he decided to go through the camp and try to lose the bull. I saw Kyle turn behind a bush and bison follow and then I saw Kyle take off. The bison started chasing after him and Kyle darted through the trees and the bison continued after him. I lost sight of Kyle and the bull for a few seconds, but then Kyle emerged from the brush unscathed. The bull had lost interest and stopped following him. I guess he just needed to let us know he was in charge.

After that adrenaline rush we drove off to find a nice spot for sunset and we spent an hour shooting the golden light hitting the canyon. This was just to pass the time until blue hour, but we still found some nice compositions and interesting shots. It’s hard to not find something to take a photo of there. We gathered our gear back in the car and returned the Honey Flat campground to set up before dark—keeping an extra eye out for buffalo. We once again reached the bend in Holmes Creek and began preparing for the shot. We sat up our cameras and carefully backed away from the cliff’s edge. We spent the next few hours watching the sky grow darker and more and more stars becoming visible. The creek bed below became enveloped in darkness that was only interrupted by the gleam of fireflies hovering above the creek. In fact, you can see some in the shot if you look close enough.

As we reached 11:00pm the milky way broke above the horizon. At first, it was dim and hazy, but as it rose higher in the sky it began to shine in all its splendor! This must be one of the best views I have ever seen with my naked eye. I have never seen the milky way that thick before and watching it stretch across the horizon I was entranced, and Kyle was even more amazed. We ended up shooting the milky way until 12:30am and then moved on to a few more locations. We finally called it an end around 3am and arrived back home in Wichita Falls around 5:45am. It was a long haul, but it was well worth it! I captured a photo I have been wanting over a year now, and got to share my knowledge and help my friend get some amazing milky way photos. I am planning to be doing more milky way trips this year. I hope I captured the wonderment and mystery of this amazing Texas park, though I could’ve done without the light pollution. Regardless, I left with several images I am proud of and Kyle said he had a great time and that’s all anyone can really hope for. 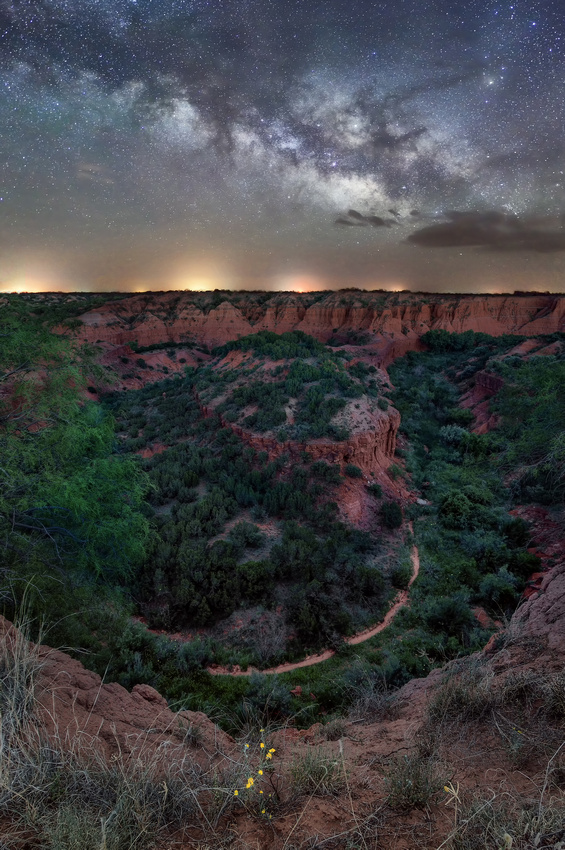 Becky Pedon(non-registered)
Absolutely stunning! I keep going back to look at it. Your are an extremely talented young man!
Gene Forsythe(non-registered)
Outstanding photo --------- but then that's usual for you !

Great backstory as well. Entertaining, and once again I am glad it was you and not me.

Also I like the new photos and design for the website.......you need to give us a short presentation on it at the next meeting.
No comments posted.
Loading...
Subscribe
RSS
Keywords
Pic of the Week nature landscape travel sky Texas Oklahoma night weather rock
© Ben Jacobi
Powered by ZENFOLIO User Agreement
Cancel
Continue