Utah is a photographer's dream. I have always said I want to stay and live in Texas, but if I would move anywhere else it would be Utah. Around every corner you are either greeted by impressive mountains, intricate canyons, incredible arches, or interesting rock formatoins. Its very easy to find a photogenic or picturesque scene to capture. But naturally, this beauty draws crowds of tourists as well as photographers to these areas. Millions of people visit these attractions and national parks each year. In fact, Canyonlands National Park, saw 776,218 visitors in 2016 and I was one of those visitors.

Canyonlands National Park was my last stop for the day on 6/22/16. This was my second full day of traveling and photography. I had spent the day shooting Horseshoe Bend, Antelope Canyon, and Monument Valley. I wanted to arrive at Canyonlands, and more specifically the Buck Canyon overlook, before sunset. But before I made it Buck Canyon I stopped at Candlestick Tower overlook and Mesa Arch. Mesa Arch is a natural sandstone arch that spans 90ft at the edge of a cliff. This location has become very popular for photographers especially during the early morning hours. Dozens of photographers line up around the arch shooting the sunrise glow on the underside of the arch with the dramatic landscape of the Colorado river gorge/canyon down below. I was out there just before sunset and had it almost all to myself. There was a young couple that was out enjoying the view as well. I waited for them to leave before I started shooting my images.

I was scouting some locations I could use for sunrise and trying to familiarize myself with compositions I thought would work for a sunrise shoot. Spoiler alert: I didn't shoot the sunrise the next morning! Instead, I made some images from Mesa Arch at sunset. This was actually a pretty tricky shot to capture. When I arrived at the arch, late afternoon light was shining all over the arch and landscape below it and while it was amazing in reality, the still image lacked the sense of depth I wanted to capture in the photo. So I patiently waited for some of the light to be filtered out in the intermittent cloud cover. So the clouds would block the sun and a much softer light would fall on the scene, but now all the landscape was covered in the shadow of the cloud. So now there not only wasn't that sense of depth, but the colors were flat and so I waited some more.

Finally, I got the perfect combination of light falling on the distant landscape, soft light in the foreground, and some clouds in the sky adding some nice texture. The result is an almost 3D look to the photo. You can see all the layers that make up the amazing scene the arch in the foreground, the cliff edge, the rock spires and Washing Woman Arch, the canyon, and emerging from the haze an almost “ghostly” silhouette of the La Sal mountain range. Not to mention, the excellent clouds in the sky adding just a bit more dimension to the overall scene. Although, those clouds would plague my sunset shoot later in the evening. 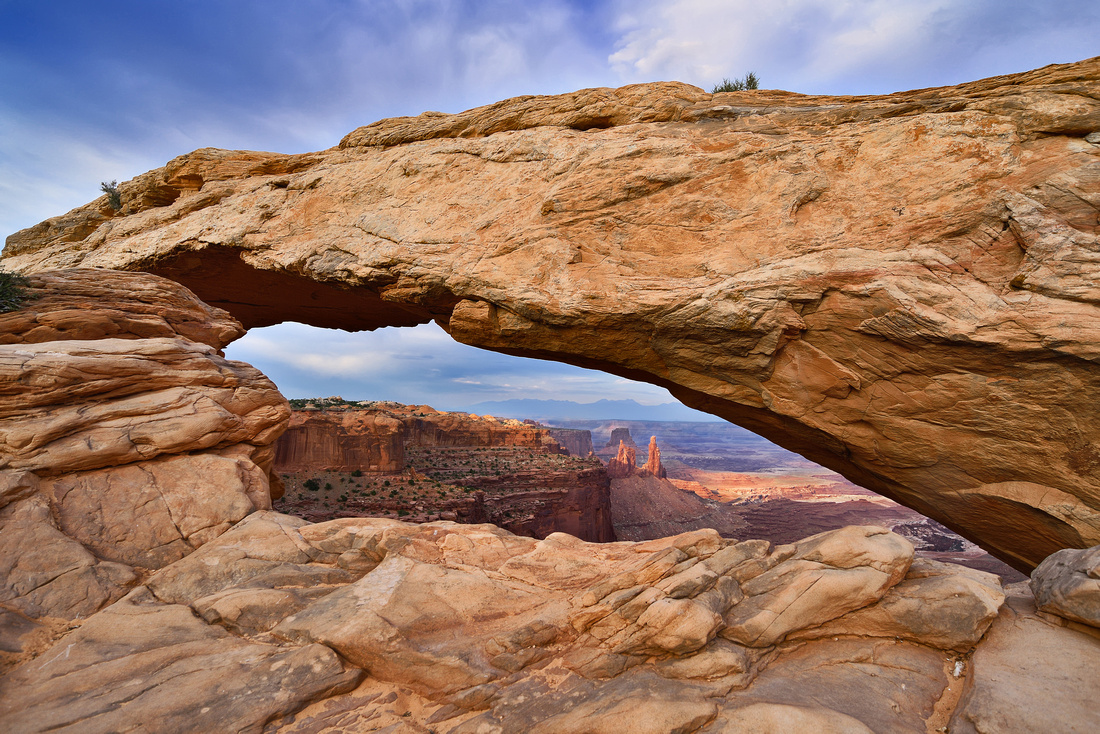