"Once in a Lifetime Capture"

When I'm telling the story behind my images I'll frequently use words like "awesome", "epic", "incredible" and even "surreal". While this is true, and the general emotion I was feeling when making those captures, nothing has ever compared to my "Once in a Lifetime Capture". It doesn't seem like it has been three years since I recorded one of the wildest and surreal experiences of my life. Witnessing it, was an incredible treat from the heavens, but getting to record and share it with other's is even more exciting! Three years ago I was meeting up with some of my good friends for some night photography. We decided to use St John's chapel in the ghost town of Bomarton, TX. The first church was built in 1909, but after a fire and some structure damage the new brick church was constructed in 1936. The beautiful old chapel would serve as our anchor point as we tried to capture images of the milky way around and behind it.

Mike was kind enough to let me ride with him to Bomarton and we met Jim Livingston at the church. Around 9pm we arrived to Bomarton and the church. We got out and exchanged greetings. This was Mike's first night shoot and first time meeting Jim. Jim has been a good friend of mine for a while now and I always enjoy shooting with him. He has a passion and drive to capture great, meaningful images and helping other's do the same. The sun started to set and we set up for some milky way photos. We spent a few hour showing Mike how to photograph the milky way and how to light paint. We captured some nice images that night including some shots of the interior of the church. After that we continued around to the south side of the church. Jim brought a spotlight to use for light painting and it was suggested that we try to capture a beam of light hitting the cross on the top of the steeple. After a few attempts we finally had the right approach and we were able to capture that image. It looked pretty nice. Jim suggested we change our position. He said " Come over here to the other side and shoot the milky way behind the church. I can still use the spotlight to paint the steeple." We agreed and moved over to the other side. This was absolutely crucial for what happened next.

We started shooting off some frames and were enjoying the images we captured. And then something incredible happened. I shot off an exposure as did Mike and Jim began to paint the steeple. The stars and milky way in the night sky were shining brightly and the weather was quite tolerable, which is pretty rare in late July. I heard the shutter of my camera release as I stood there watching the night sky. And then out of nowhere, we saw a bright flash and the sky split and a magnificent fireball meteor came through the scene bisecting our night sky. The light from this meteor was so bright and pure you thought it was daytime. The fireball lasted for several seconds and we watched as it broke up into smaller pieces. It was so intense that you could hear the faint booms and hiss as it burned in the atmosphere. It was the most awesome, epic, incredible, and surreal experience of my life.

We were jumping around screaming like a bunch of little kids just amazed at the sight we just witnessed and then I heard the sound of my shutter closing. The click seemed to echo forever and I remember thinking to myself there was no way I captured this unbelievable moment. I thought it was way too bright for my exposure settings. I thought all I was going to get was a giant white blob that would be unrecoverable in post processing. I didn't care, though. I was just excited that we got to witness such a remarkable event. I pressed the playback button on my camera and looked on the LCD screen. I felt my heart sink into my stomach and a chill going up and down my spine when I saw the photo. I was wrong--dead wrong. What I had before me was a near perfect exposure of the event. I stood there for several seconds just trying to understand what had just happened. Then I seemed to be snapped back in reality when I heard Jim's voice shout "Did you get it?".

"I got it!" I shouted back. Mike also shouted "I got it too!". I captured the full path of the meteor almost perfectly aligned with the church. Mike was in a little bit tighter and he captured a nice close up view of teh church tower. We all huddled around each other's cameras marveling at the photographs we just captured. But then there was a sobering moment when Jim remembered where his camera was. He was facing the opposite direction and shooting a tighter shot of the steeple, unfortunately he missed it. But Jim couldn't be happier for us and I know he was excited to help us capture this once in a lifetime image. I had captured a historic church in front of the milky way, with a beam of light touching the steeple, and a fireball meteor shooting across the scene. I will likely never get to capture such a thing again and I am truly fine with that. This will forever be my Once in a Lifetime Capture. 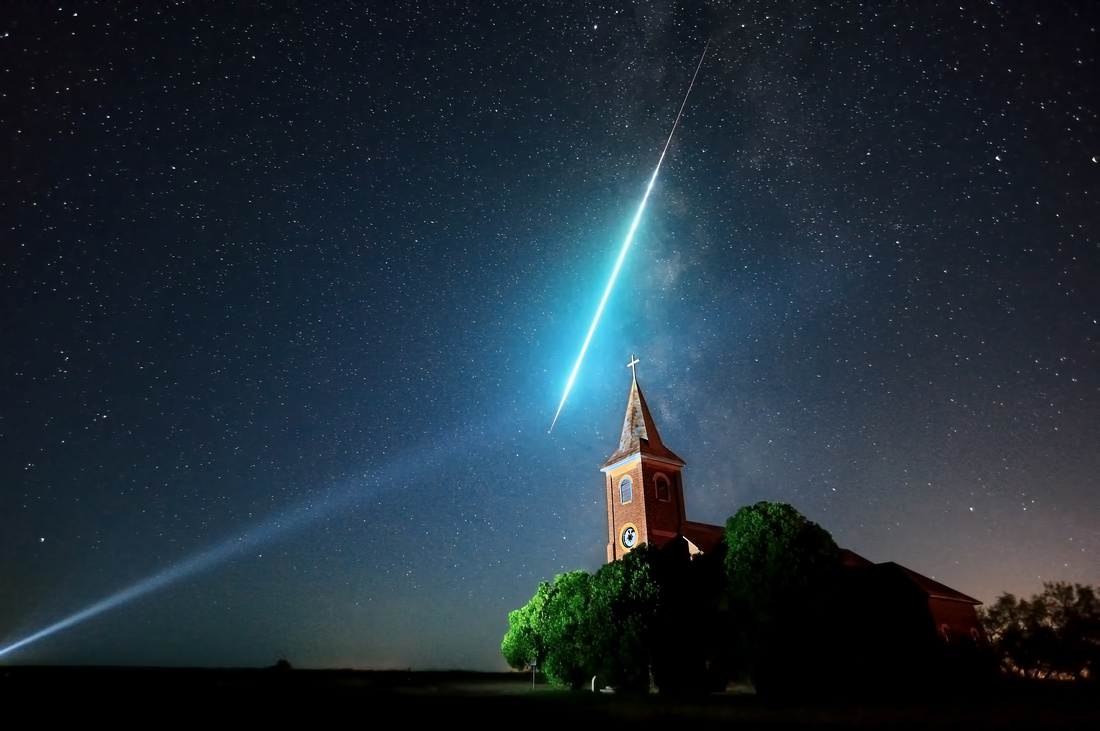 Once in a Lifetime Capture