I returned from my first overnight camping/photography trip of 2018. The destination was a small state park in central Oklahoma. It is a park that I have been wanting to visit for quite some time, but could never get it to work with my schedule. I am talking of Red Rock Canyon State Park. Not to be confused with Red Rock Canyon State Park in CA and NV, but the state park in central Oklahoma. While the park is small, its is no less impressive. The park is nestled in a one mile long canyon surrounded by stunning red rock cliffs. Many people go there to ride motorcycles, camp and hike, and rappell down the cliff walls. But before it was a park the Native Americans would use the canyon as a winter shelter. The canyon was also an important landmark of the California Trail and for those seeking wealth and prosperity during the California gold rush. In fact, in the park there are areas you can see wagon ruts carved through the red rock. I was there to camp, hike, and of course shoot some photography. The unseasonably warm temperatures beckoned me to get outside and explore with my camera.

I left work Saturday afternoon around 2pm and headed north towards Oklahoma. There is no one single road that takes you to the park. Throughout the drive I would change highways, and zigzag on different roads as I drove through the open prairie. The drive was fairly short and only took a couple of hours, but when I started to get closer to Hinton, OK I started to notice a little bit of a change in the landscape. Eventually, I reached the entrance to Red Rock Canyon State Park and made the steep, winding descent into the canyon. At first look I could see the red rock walls the park was named after. They rivaled and in cases exceeded the red rock of Palo Duro Canyon and southern, UT. It was hard to believe I was still in Oklahoma. The park road lies at the floor of the canyon and follows it for a little less than a mile to the end of the canyon. I pulled into the Canyon camping area and found a nice spot beside some of the Red Rock. I got my camp set up and went to explore the park before sunset. It was starting to get late and I knew I only had about a half hour before the sunset so I went to a balance rock near the entrance to photograph it in sunset light. These images came out alright, but what I was really looking forward to was the next day. I was wanting to capture the sunrise light reflecting off the canyon walls.

After the sunset shoot I walked back to my campsite and started to plan out the next morning. My goal was to photograph some of the sunrise and then hit the trail early. I had a 6 mile hike planned that would take me throughout the California Road trail, then connect me with the Canyon Rim trail where I would descend the canyon and continue to the Rough Horsetail trail and then back to my vehicle. All together I ended up hiking 6.3 miles through the morning. I was the only one out on the trails and I had it all to myself, which I thorough enjoyed. But before I started hiking I woke up at 7:30am and got my gear together to see what kind of images I could make that morning. The sky had clouded up and I could see a few breaks in the cloud cover, but I was not too optimistic about my sunrise chances. I was one of the few people up this early and was undisturbed while I looked for potential photographs as I drove to the trailhead. I cam across a section of the canyon with an interesting overhang in the rock as I explored this area I found a lone Caddo Maple sapling with its leaves still attached. This caught my eye and I decided I would shoot the sunrise at this location.

This type of photography is not normally something that I do, usually I try to go for a wide angle to incorporate the whole scene, but there are times where I deviate from my comfort zone and start isolating scenes and looking at smaller details. The almost brown leaves stood out just enough against the red canyon wall and I thought if I could find the right angle I might have a shot here. I played around with different focal lengths, but this was the one I found most striking. The pattern of the canyon wall would reflect the sunrise light in a unique way and if I zoomed in you could not tell where the photo was taken. You can't tell how tall these rock cliffs are, in fact it almost looks like something you might capture in Zion National Park! It just goes to show if you can focus in on more isolated areas you can find unique photographs. I had my camera set up and now it was time to just wait for the light but the lingering clouds left me a little worried. There was a brief period where the sun broke through and sunrise light splashed against the ciffs turning them to an almost glowing state. But as the sun came out the wind also picked up and my shutter speed was too slow to stop the motion of the leaves blowing in the wind. I decided to use my camera's built in timer release to shoot off multiple frames and maybe, just maybe, the wind would die down during one of those times. I photographed about 15 images before the could swallowed up all the sunlight and I packed up my gear. As I looked on my camera's LCD I was saddened by the lack of sharpness on all the photos until I got the second to last image. This photo was sharp! And not only that it was during the peak of the light reflecting off the canyon walls! Even the little lone leaf towards the top was sharp! I came back with a winner of a style I don't typically shoot, in an area I had never visited, during less than ideal conditions. Now that's a win in my book! 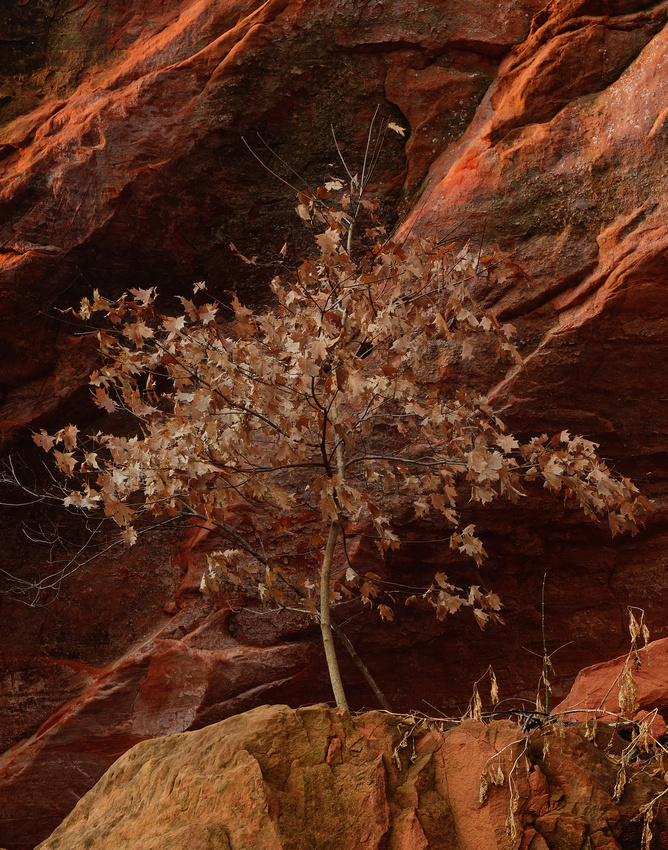