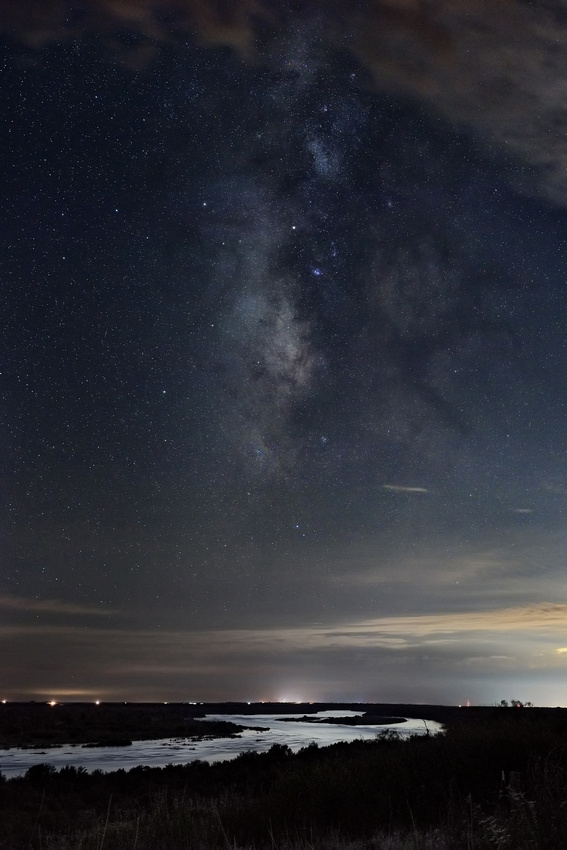 The milky way shines brightly over the flooded Red River.

Over the past few weeks we have received significant rain. Thankfully, we aren't in dire situations like central Texas, but we have received much more rain than our monthly average. In fact, according to the AHPS we are 4-6" above our year-to-date average. On the one hand, its a good thing. After all we were starting to experience drought-like conditions. But on the other hand, gloomy gray skies and rain don't make for good landscape photography. So I haven't been able to travel, hike, or camp these past few weeks and I've only pulled my camera out of my bag a few times. But on the most recent time I got an image I've chased after for a while now. The premise is simple: shoot the milky way over the Red River.

Simple enough, right? Well there were a lot of things to consider and one of the biggest ones was location.  Most land surrounding the river is privately owned and the only public roads that cross the river are high traffic. Its kinda hard to shoot a long exposure when an 18-wheeler comes zooming past you vibrating the bridge like a mini earthquake. So locations were limited. There was one spot in particular I noticed the river came close to the highway and there was room to pull off the road. The best part, was the milky way would align with the river at this location. When I  scouted out the location a few years ago we had an average rainfall so the river level was normal, but from my perspective it was hard to see. Fast forward a few years and we are now in a flash flood watch and a flash flood warning on the Red River near Burkburnett, TX. The river was expected to reach 10.1' flood stage Friday afternoon. I knew the river would be flowing nicely and if the clouds were clear I might actually be able to get my shot.

Immediately after work, I drove to my apartment and gathered my gear before heading out to Oklahoma. The sun was beginning to set and I could see scattered clouds off to my west, but to the north was a large mass of cloud cover that would making its way here later that night. I crossed over the I-44 bridge and could see the river crashing into the side of the bridge. Ordinarily, the river is quite dry and one can see the sandy bottom below, but now it was roaring as it flowed downstream. I entered Oklahoma and it wasn't long before I reached my exit to take me east. I followed highway 70 for 12 miles getting occasional glimpses of the river from the road. Just after the sun set I made it to my location. There's a place just past the Cotton/Jefferson county line where highway 70 bumps up against the curvature of the river and Whiskey creek. A natural draw drops 20ft to the riverbed and from this high point you can see the river as it bends its way to the west. I parked my car and jumped out of my vehicle trying to set up while there was still daylight. I found a quick composition and used my Stellarium mobile app to help align the milky way in my shot. It looked like the optimal time to shoot the milky way would be between 10:30-10:45pm. I glanced at my watched and saw the time was 7:57pm. I still had 2.5 hours before the milky way would be in position.

I stood there on the embankment pressing my tripod against the barbed wire fence to get as close as possible. I watched the glow on the horizon change from a pastel orange and pink to a cobalt blue. All I could hear was the splashing of the river and the occasional call of the coyotes. It was perfect, sublime, and still. Then my natural sound soother was interrupted with the high pitched drone of the female mosquito. Swarms of mosquitoes began to surround me and I would spend the rest of my time swatting them away. I did come prepared however and wore a long sleeve shirt and long pants. My hair and beard made for a nice barrier and helped keep them away from my face and neck. I watched as the sky became darker and darker. The crescent moon peeked below the clouds off to the west and sent a silvery light bouncing off the river. This made the river appear to glow amidst the dark vegetation. Eventually, it was dark enough to make out the milky way on my camera and I waited for it to get closer to the river and in my frame.

I had an idea how the final shot was going t look, but I wasn't sure that my usual technique would produce the results. Normally when I photograph the milky way I try to fit as much of it into the frame as I can. This means using a wide angle lens, but that lens would shrink the river and defeat the purpose of the photo. So I packed a few extra lenses with me. I took my normal 20mm f/1.8 (which is what I use for my milky way photography) and I brought my 50mm f/1.4 and 85mm f/1.8 lenses. This would give me a little more range with composition choice. After a few test shots I finally settled on using my 50mm f/1.4 lens. This was roughly the equivalent of what my eye sees. But the problem was the milky way was still going to be higher up in the sky. I could have just shot a vertical image, but it wouldn't have the detail I wanted for the final result. So I shot a multi-image panorama in the horizontal position. The plan was to stitch the images together in Photoshop and have a high resolution image of the Red River and milky way.

Finally, the time had arrived for me to start shooting. The milky way was now over the flooded Red River and I started making my shots. It wasn't long until the clouds from the northwest starting moving into my frame. The advancing cold front was surging across the TX/OK panhandles and into northern TX/southern OK. I quickly snapped off my images for the panorama taking extra care to make sure the camera stayed aligned and level. It didn't even get to 10:45 before the clouds came in and blocked my view of the milky way. I was fortunate to get the shots I captured. I managed to squeeze only one series of images before the clouds came through. Once the milky way was no longer in view I packed up all my gear and started off back home. I was very eager to start working on and editing these images. It took a little extra time and a few do overs, but I am quite pleased with the final result. After all, it may be a while before I get the opportunity to photograph the river like this again.