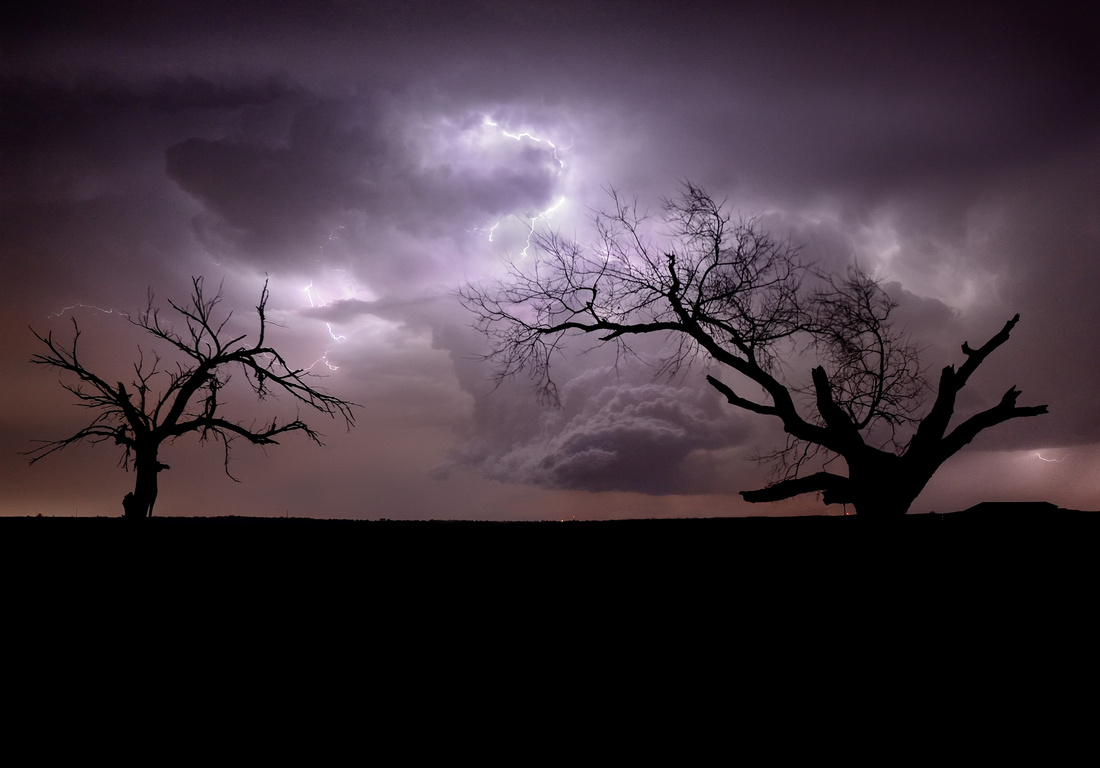 Who here loves a good out-of-season storm chase? I know I sure do! That is exactly what happened last week as a cold front approached a moist air mass that was situated right over northern, TX. The Storm Prediction Center had highlighted this event a few days in advance and they were calling for supercells with large hail, strong wind gusts, and tornadoes possible. But for Wichita Falls, I wasn't too concerned for severe weather. First, I knew I would be working that day so storm chasing was out of the question. Second, the weather models kept us under clouds all day. This would limit daytime heating and destabilization of the atmosphere. There was the possibility of a few isolated storms along the approaching cold front, but the front was expected to overtake the dryline quickly sweeping away our chance for storms.

That afternoon I am helping my boss move his Christmas tree and I hear rain starting to hit the tin roof of his shop. We stepped outside and sure enough a storm had developed just to the southwest of our location. The light pitter-patter of rain quickly transitioned to low roar almost like you were standing near a waterfall. After a few minutes the rain let up and the storm continued to our northeast. Bright pink flashes of lightning exploded on the backside of the storm--what I wouldn't give to be working right now. That was when I texted by buddy Jaden to see if he was free for a night time storm chase. After work I picked up Jaden at his house and we started off to my apartment to pick up my gear. Along the way another cell blew up to our west and in the faint glow of twilight, I could see the updraft tower in the distance. We reached my apartment and quickly grabbed my gear and we were on our way.

Storms were now to the east, west, and another line developed to our south. The strongest storm was to our northeast near Waurika, OK. We decided to let that one go as we couldn't catch it once the storm system moved through. The storms to our south were closer and we were at a somewhat good angle. We opted to drive out to the northeast of Wichita Falls and position ourselves right in the middle of the storms. The storm to our west looked like it was dying. It stopped producing lightning and we thought it was through. We were concentrating on the cells to our south which had a pretty decent lightning show. About every minute there was one bright flash of lightning. Jaden had pulled out his camera to try and photograph some of it, but I kept my camera in the bag. After all, once you've photographed lightning so many times you start to look for more interesting things to incorporate in the composition. The lightning becomes for an element than the actual subject.

I watched as the storms chugged along to our south and take on the same path as the previous storm heading to our northeast. While I was watching these storms I kept looking behind me to check on the storm to our south. The updraft was still there, but there didn't seem to be any life in it. Then suddenly flashes of lightning started erupting behind the clouds. It was as if God was using a defibrillator to resuscitate the storm. Electrical energy began to discharge from the storm and a low rumbling of thunder could be heard off in the distance. We were now in the perfect position to photograph the storm. We watched as the updraft passed directly to our north. The storm had a good amount of organization with a persistent lowering, although the rotation was quite limited. Still we enjoyed the lightning show and we were able to make some nice images.

As the cold front began to approach the skies started to clear to our west. The front also pushed our storm to the north east revealing a starry sky behind the updraft. We stood there snapping photos and trying to capture the beauty of the scene. Although, we were in a fairly residential area and we had to deal with distractions like houses, telephone poles, and lights. When the storm was no longer in a good position we decided to pack up the gear and follow it more to the north east. Along the way, lightning was bursting from this updraft and we could make out all the details of the storm structure. But the storm was moving away from us and it was shrinking as it got farther and farther away.

I found a dirt road that took us over some pasture that gave an unimpeded view of the storm. As we traveled further down this dirt road I spotted these two dead trees that framed the storm perfectly. I already knew What my composition was going to be. We pulled over and I quickly got my tripod out and found the perfect angle to include the trees and the storm. The silhouettes of the trees were such a stark contrast against the illuminated stormy background.

I did have some challenges with this shot, however. I wanted to keep as much detail in the storm structure as possible so my shutterspeed had to be shortened. This was shot with a 5sec shutterspeed which was just long enough to capture lightning, but short enough to keep the storm relatively sharp. There was a trade off, however. By keeping my shutterspeed shorter I needed to open my lens more. I shot this at f/2.8 which is three stops brighter than the lens' "sweet spot" of f/8. This meant I could only get the storm or the trees in focus. I opted to focus on the storm and let the trees fall slightly out of focus. In the final shot, I did do one thing that made a much stronger composition. I removed a building and a barn from the background that seemed to clutter the scene. Normally I don't do this much removal. I prefer to just find a composition where those elements are not visible, but it was impossible to frame the trees and the storm without getting the buildings in the shot. Because the scene was so dramatic and interesting I decided to remove those distractions from the image. The end result is a much stronger composition and a more pleasing image.