With the spring equinox just around the corner, its this time of year that I start a transition in my photography. Now that winter is (mostly) finished the days start to get longer and the temperatures start to warm up. Spring time is an excellent time for any photography, but its my favorite time of the year—storm chase season! Although, if I'm being perfectly honest, the past several years have not been such good storm seasons for me. Commitments to work and other responsibilities keep me from chasing all that I want and now my vehicle is starting to get older and has been giving me problems since passing the 200,000 mile mark. So I expect that I won't travel too much this season. So here's hoping for some nice local chases.

For this weeks featured photo I looked back on some of my past chases and noticed a pretty disturbing trend. After 2012 I haven't had a storm photo worth sharing during the month of March. March 15th marks the first “offical” day of the chase season, but for the past six years I have not captured a useable storm photo in March. I remember when I first started storm chasing and would be out as early as the first week of February. Maybe I'm just used to earlier setups, or maybe this is how it normally is. Regardless, my last sucessful March intercept was all the way back in 2012. And it was an interesting chase day.

I had driven out to Childress, TX in the early afternoon. After carefully going over surface charts, satellite/radar images, and weather models I decided on my target. Sitting at a gas station in the middle of town I could see puffy cotton-ball like cumulus clouds developing overhead and a warm southeasterly gust would blow through now and then. Within a few hours I was making my way to the west side of town and following a rapidly accelerating tower. “This storm might bust through the cap” I thought to myself. As I scanned the horizon I could also see more towers going up along the dryline stretching from west to southwest of my location. I felt pretty good about my target and when the storm broke through the cap and started to explode. I was in a good position keeping an eye on the storms updraft. I followed and chased the storm for a few hours before it took off to the northeast and blew itself out.

The storm, while beautiful, never really seemed to get going and I was so entranced with my storm that I failed to notice the beast of a cell forming to my south/southwest. I looked over on the radar and saw a classic hook echo and “screaming eagle” shape to the storm. “I bet it goes tor-...” I was cut off in my thinking when a warning alarm came in over my radio and a bright pink polygon appeared around the storm. The storm was now tornado warned and I was on 35 miles away. I finally gave up on my storm and started making my way south keeping track of the storm on radar along the way. About 20 miles from the storm, I could start to make out the updraft base. It was a thick barrel shape with a low blocky wall cloud protruding from the base. I was too far away to see any rotation so I wanted to get closer to investigate.

About 10 miles away from the storm I was able to take in its photogenic structure in the late afternoon light. A strip of golden yellow light was hovering above the horizon behind the dark and foreboding storm clouds. I watched this storm move off to my north east, but as it did so I noticed it starting to dry up. The thick barrel shaped updraft began to shrivel and shrink into a skinnier fluffier structure, and the low blocky wall cloud dissipated up. The updraft base started to become more elevated as the sun began to set. The storm had transitioned from a healthy, classic supercell to a low precipitation supercell. I decided to pull over and watch the storm go off into the sunset. I found a big open field where stopped and got my camera out. To try and add some foreground interest I incorporated the stalks of some weeds and framed the storm's updraft between them to make a somewhat interesting composition.

I sat on the hood of my car watching the storm try one last push of the updraft before finally succumbing to the lack of energy and moisture. The scene was quite nice and there was nobody else around which made it even more special. The storm eventually starved and died out and I turned back to the east and headed back to Wichita Falls. So while it wasn't the most exciting chase, it was still a chase in March. I'm hoping for a great storm season, but I'm remaining realistic in my optimism. Only time will tell. Once thing is for sure, the month of March isn't over yet. 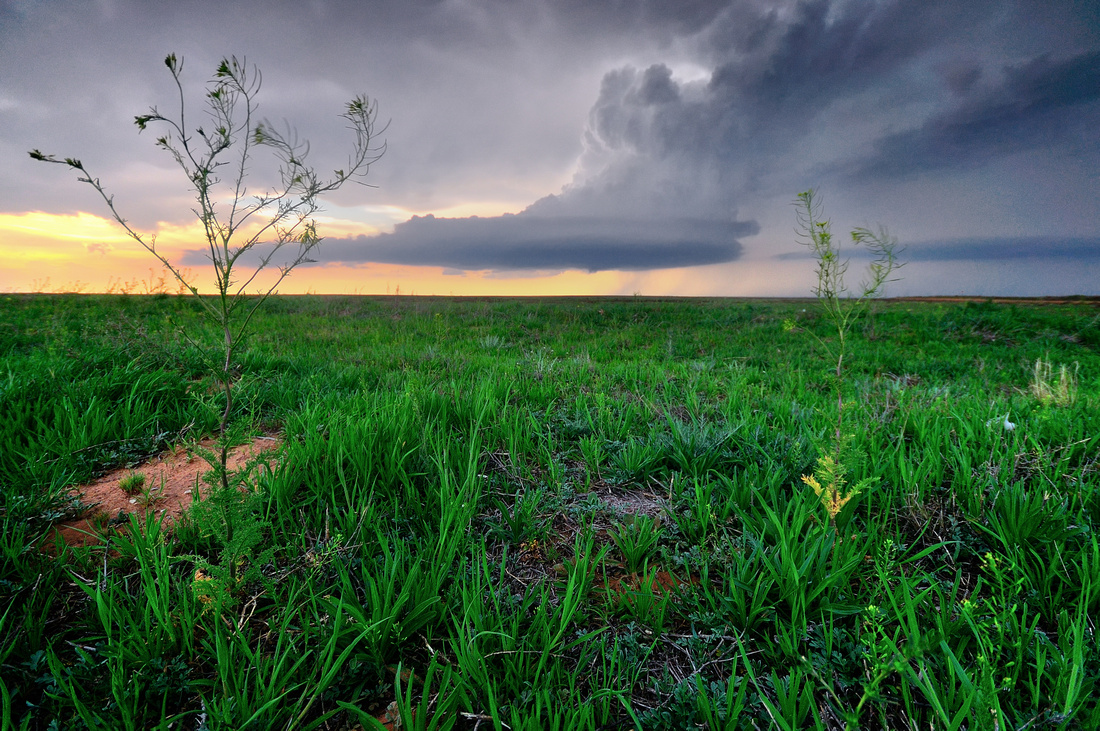