“Sunset on the Bluffs”

Truthfully, I had not planned to post a Pic of the Week this week. I really hate that, I don’t like having anything new to share or any stories to tell. Sometimes I’m just lazy, other times I’m busy, but this time was different. I actually had a legitimate excuse. Since Sunday morning I have been sick with whatever cold that is going around. I woke up with a sore throat and discovered that my voice was all but gone. It stayed that way until yesterday (Wednesday) evening when my voice finally started to come back. I was excited to speak again and I was more excited that I was doing better. I had made an appointment to see the doctor Thursday morning and I even considered cancelling it. Around 2:30am I was awoken by a huge gasp of air I tried to take in. I had fallen asleep on my side and one my nostrils was stopped up and the other was covered by my pillow—I couldn’t breathe! I don’t mind having a sore throat and I don’t mind that I lost my voice, but I cannot stand being congested!!! If I can’t breathe well I feel like all my energy is being zapped from me. Simple tasks become so much harder when you are only breathing through one of your sinuses. So that night I tossed and turned and hardly got any rest and I knew I was going to keep my appointment tomorrow morning.

I woke up early and went to the clinic and got checked out. The doctor informed me that I had caught whatever it was that was going around. She wrote me a couple of prescriptions and I was on my way. As the day drew on I became more and more congested and stopped up, but now there was sinus pressure building in my ears and head. This is the stuff I really, REALLY, hate and it puts me in a sour mood quite frankly. Now I know what you’re thinking, “Why are you telling us this?” mostly its to let you know I have a good excuse for the delayed Pic of the Week. “So, what about the photography?” I assume you’re thinking. I’ll go ahead and get on with that. While I am sick, I still went in to work today, in fact I’ve been in everyday this week (its not fun to help customers with no voice). But today, I had a shoot to do and I brought my camera. So, as I’m getting ready to leave from work I look outside and I see the sky. There are some broken lines of alto-cumulus clouds and a small strip of clear sky near the horizon. I wondered if there might be a decent sunset. I got into my car and considered driving out to the Wichita Bluffs Nature Area and see if I could catch a sunset over some of the bluffs. So instead of driving home and curling up in my bed I decided to drive to the Wichita Bluffs. Along the way my head was pounding, I was coughing, and my nose was running EEEWWWW! But I kept looking at my rearview mirror watching the sky. Just a few miles down the road and I was the entrance to the Wichita Bluffs Nature Area.

Now I have visited the bluffs once before on a short walk. I was impressed with the trail and even the way they tried to preserve the natural landscape. Its nice having these little escapes into nature close to home. I got my camera and my tripod together and began to walk on the trail. Now, the sun was starting to get closer to the horizon and I knew the location I wanted to be. But as I said earlier, when you can’t breathe even simple things can be difficult. I continued on the path with the pressure in my head increasing. With each step I would hear a small pop like I was taking off in a commercial airliner. I looked behind me and saw the sky was showing more promise and I continued on the trail. There was a point where my legs were just too tired, my breath was too shallow, and the sun was getting too low. So, I opted for the first side trail I could find. From this view I could see the bluff I actually wanted to be at, but I also noticed that there were some compositions right where I was. I set up my camera pointing towards the bluff and watched the clouds float across the sky. I noticed something when I was shooting some of the photos, I could breathe—through both nostrils!

I was ecstatic. No amount of medicine would take away or alleviate my symptoms, but you get me behind the camera and into some nature and all those distractions just melted away. I knew this was only going to be temporary euphoria, but I was going to hold on to every bit of it. During my spirited state, I found a nice composition of some native grass, the jungle of mesquite trees in the valley, and the bluff I was using as my subject. I played around with some angles and focal lengths and found the one I liked most. Not but a few seconds later, the sun fell below the clouds and sent a soft warm glow of light on the bluffs and the grass in my foreground. A small strip of pink color creeped in on the left side of the sky helping to unify the warm and cool color tones. There is a tranquil feel and a subtle beauty to this image that I feel reflects the Wichita Bluffs Nature Area quite well. This isn’t a super dramatic landscape or vista, but there’s a simple, subtle beauty to the scene. The foreground grass contrasts nicely against the dark wood of the mesquite and cottonwood trees in the background. Even the light itself is delicately falling on the landscape bringing about a subdued beauty to the scene. I stayed in that spot until just after sunset and began the walk back to my car. The adrenaline and excitement from the photography started to wear off and I could feel my symptoms returning. But I was happy that I came back with a nice image and actually got to breathe for a short time. If you live in Wichita Falls and you haven’t checked out the Wichita Bluffs Nature Area I highly recommend you visit. The trail is a one mile one way walk on a paved path that leads on top of the bluffs and to an overlook of the Wichita River. I’ll try to be on schedule with my Pic of the Week next week, hopefully I’ll be back to my normal self by then. Enjoy! 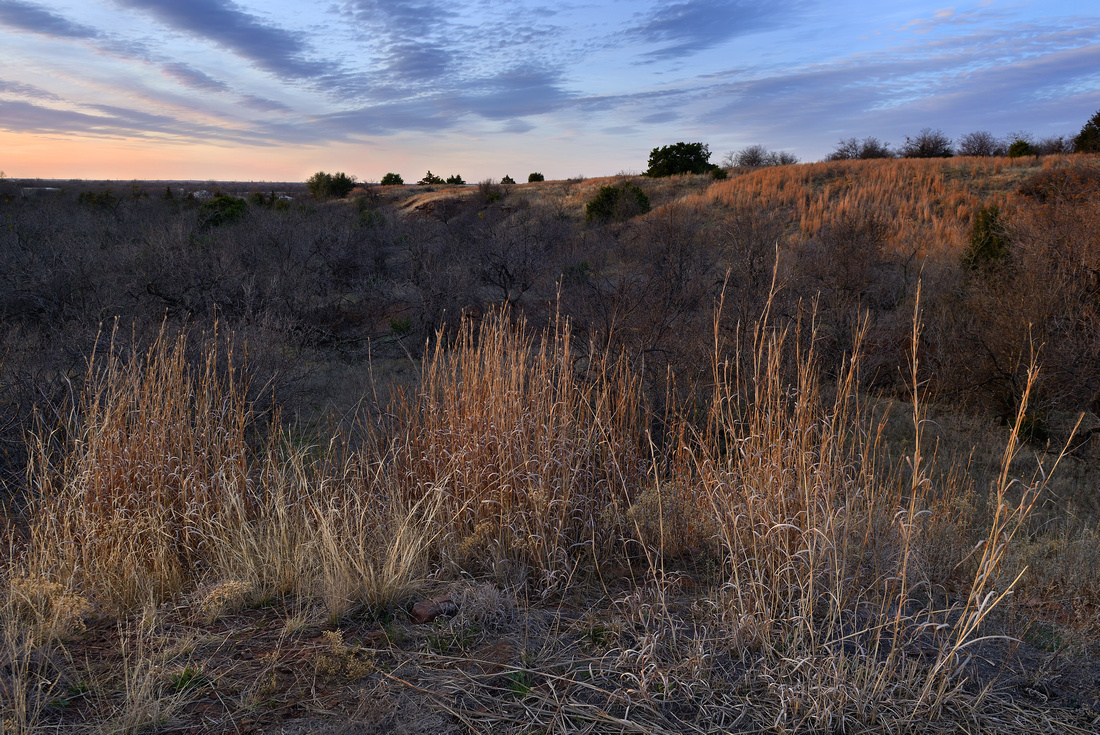