It has finally happened. After months and months of waiting, studying weather charts, and praying I at last have the first chase of the season under my belt. This is always a reassuring thing. It is kind of like having butterflies in your stomach before a performance or presentation, but once you get up there that nervousness goes away. I had sat all the way to May without encountering a chaseable storm (though I did photograph some lightning in late April). A good storm chase was long overdue. The ingredients for supercell thunderstorms were coming in over the southern plains during the first few days of May. I had my eye set on May 2nd. The obvious and probably preferred target was the triple point in NW OK and SW KS, but due to working and lack of reliable transportation I was focusing on the dryline play farther south. There was also slightly better wind shear in the southern target, but our greatest concern was the storm mode, lack of cap, and approaching cold front. But it was much better than anything I had seen all year.

I'll spare you the details during the work day, but I wanted to leave early and couldn't due to how busy we were. My original plan was to leave work around 4pm and get to my target (Altus, OK) by 5:30 when storms were expected to fire. I spent that morning and early afternoon finishing up my projects and completing the deadlines and watching weather data in between. Fast forward a few hours and storms are starting to develop out on the dryline. As I watched the radar blips change from bright green to orange indicating a growing storm I began to mentally plan my route to reach my target. Things appeared to be in my favor to leave on schedule and then it happened. Wave after wave of customers came in to the store. We were busy for a while and when I looked back on the radar the storms had already developed into full mature supercells and a brief tornado was confirmed near Lone Wolf, OK a few miles north east of Altus, OK. The time was now 4:30pm and I knew I couldn’t catch the storms out there. Thankfully, there was some hope as more towers developed farther south along the dryline and even closer to Wichita Falls. I stayed a work until our closing time 6pm and between customers I was glued to the radar watching and planning my route. Just before we closed I was watching a supercell north of Vernon, TX. This storm didn’t seem to be moving the same direction and speed as the others. As I played back the radar loop I noticed a particular storm behavior chasers call “turning right”. This storm was slowing down and turning more to the east. I knew it wouldn’t be long before it was tornado warned.

After work I blasted my way back to my apartment and rushed inside to grab my gear and head back out the door. I took a brief glimpse at the radar and the storm now had a tornado warning on it. Though it was not moving very fast the advancing cold front was hot on its heels! When the front slammed into that storm the chase would essentially be over and I would need to wait out the squall line. I considered just staying at my apartment and letting the storm pass. After all, I did not have the most reliable vehicle, the storm would start moving fast soon, and I wasn’t even sure if I could make it across the river in time. And then I ignored those thoughts and got in my car and headed towards Grandfield, OK. Along the way I could see the approaching line off on the horizon, but couldn’t really make out any of the details to my storm. I crossed the Red River and into Oklahoma and immediately took the highway 36 west exit towards Grandfield. I reached Devol, OK right on the Tillman/Cotton county line and my storm started to come into view. An eerie green color was cast across the sky and I could see the line approaching—even closer now. I pulled over on a small dirt road and waited for the storm to make itself visible. I bet I wasn’t there for a few seconds before I felt a surge of warm air come sweeping across the prairie from the southeast. The storm was ingesting warm unstable air and the added directional shear might get it spinning.

I pulled out my camera and set up a simple composition hoping I could timelapse the storm as it moved through. The storm structure itself was a little murky and updraft was covered in a thick sheet of rain and hail, but the midlevels showed some nice striations and detail. Ahead of the storm bright pink flashes of lightning burst in front of the updraft base. I managed to capture a very brief timelapse of the storm and a few even caught some lightning strikes. The storm began to take on a more linear shape and I became concerned that line was coming too soon. But I still sat there watching the evolution and motion on the storm. It had been a while since I’ve seen a good supercell. The wind calmed for a moment and then it picked up again, but this time coming from the w/nw. This was outflow and rain cooled air from the squall line off to my west. 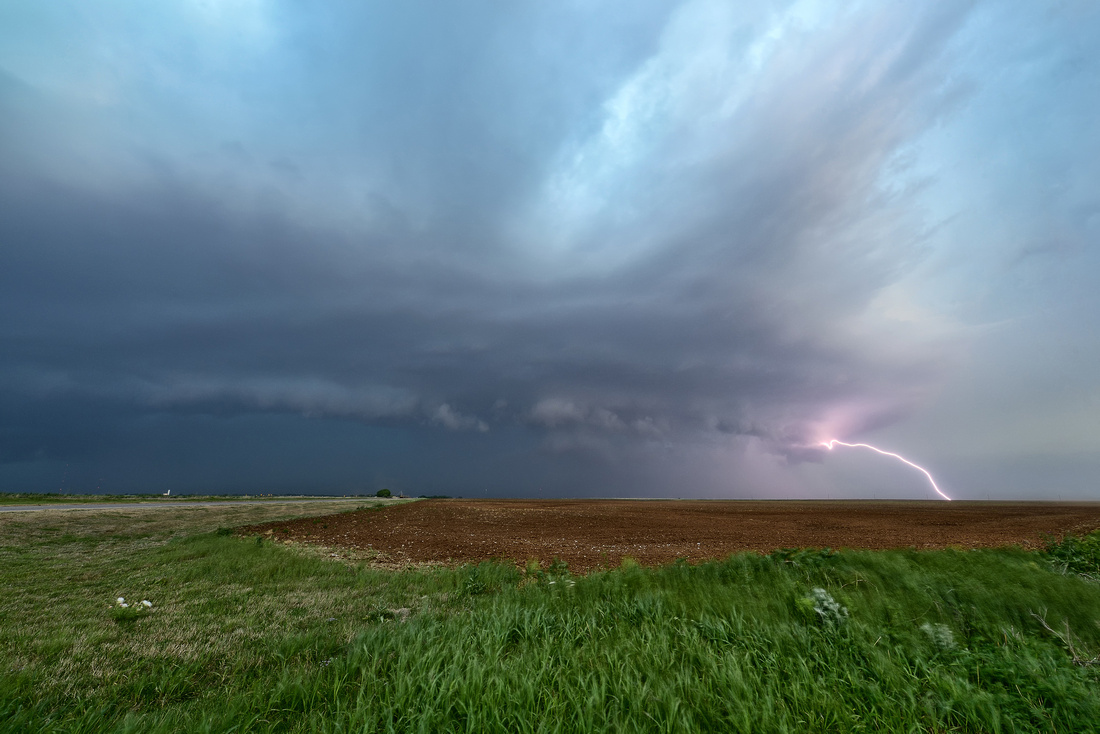 I felt a rain drop hit my cheek and it was on that note I packed up my gear and started to retreat back east. The chase was just about over now. My plan was to get back to Wichita Falls and hunker down and let the storm pass before heading back out to capture lightning shots. But there was a problem, the squall line was racing to the east, in fact the NWS estimated the storm moving at 70mph! I watched the dark ominous clouds roll overhead from my rear-view mirror—I was quickly becoming engulfed by the storm. I blasted east speeding to try and stay ahead of it, but when I reached I-44 to head south and back into Wichita Falls the storm intercepted me. I didn’t want to cross the river through that core. I was concerned about the wind and who knows what else was lurking behind that wall of rain. The rain became heavy and I started to lose visibility, but I could still make out the lights of the vehicles crossing the river from Texas so I thought I had time. I did not. The rain came in full force pounding the side of my vehicle and reducing my vision to less than the hood of my car. I really didn’t want to drive on the river bridge through that. So, I stopped where I was and put on my hazard lights. Then the wind came and as it whipped around my vehicle and I felt it rocking so I pointed my car into the wind as a safety measure. I watched as debris from nearby trees emerge from the gray void and the lightning was so close I could feel the shockwaves reverberate in my chest. I estimated the winds to be somewhere between 50-60mph and after a few moments the wind and rain returned to a more manageable state. I drove across the bridge and back into the Texas state line my heart still pounding from the event I just experienced.

I made my way to Burkburnett just across the river and pulled into their local Braum’s parking lot for dinner. When I went to step out of my vehicle a huge bolt of lightning exploded behind me causing me to quickly retreat to the safety of my vehicle. I stayed in that parking lot for fifteen minutes before the lightning had finally moved off. It was quite the first chase of the season for me. After the storms passed I went on to photograph a beautiful rainbow and more lightning through sunset. Then after sunset I photographed the lightning show off to our south and east. It felt so good to be back on the road again and chasing storms and photographing this powerful weather phenomena. Though no chases look to be on the immediate horizon, maybe we will see a few more local chases before we transition to the blistering heat of summer. Regardless, I’m just glad to finally have a chase for the 2018 season. Also, side note, at the time this image was captured storm spotters and chasers were reporting a brief tornado near Loveland about 12 miles to the north west of my location.