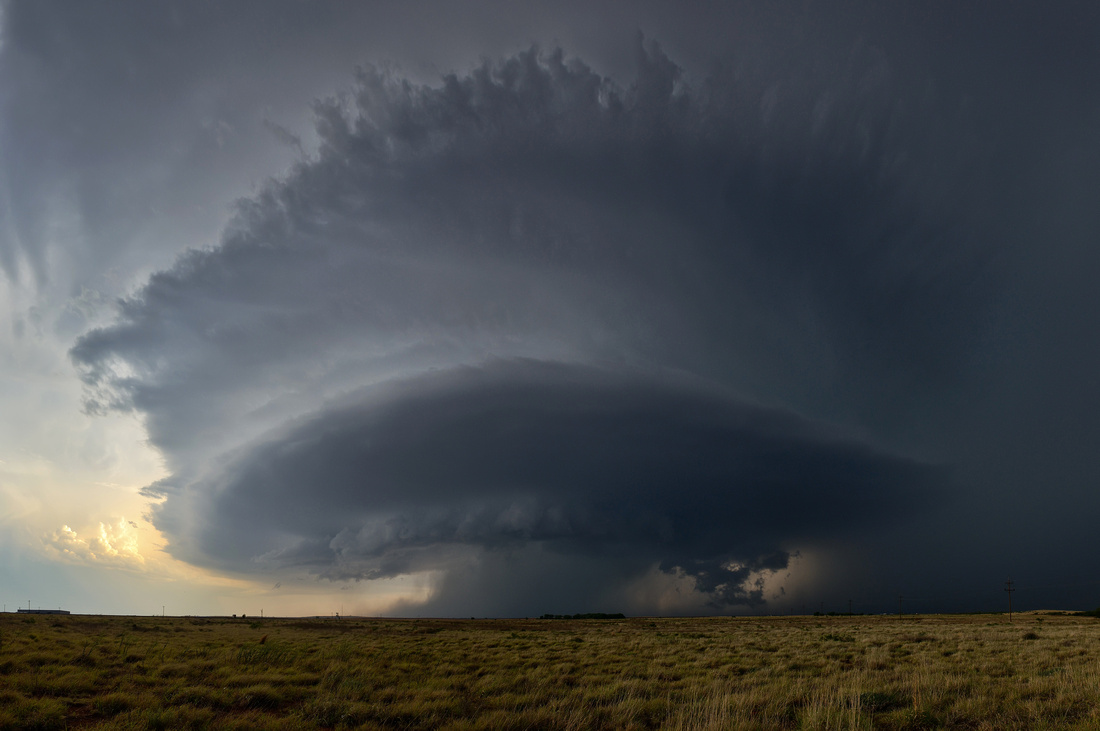 This past weekend my good friend Jaden Corbin and I drove out to west Texas in search of supercells to chase and photograph. Since the first time Jaden brought this day to my attention I had been against going. While there certainly was enough instability and moisture being forecast, we were really lacking in shear and low level winds. This had concerned about driving that far out there and ending up with multi-cell messes, or worse, no storms at all. But when it came to the day before the event (Saturday) the short range models started to give me extra hope for a chase. The NAM/WRF were picking up on an outflow boundary situating itself in West, TX. My initial target was Childress, TX where the outflow boundary was expected to stall. These things are near impossible to forecast, so you have to rely on good ol' observation and real time analysis. I went to bed early in preparation for the upcoming chase.

It is now Sunday, Mother's Day, to be exact and when I wake up I start pulling up as much data on the weather as I can. I'm trying to track down and accurately identify the outflow boundary. If a storm could latch onto the boundary it would increase the low level shear and helicity which might get the storm to spin. After a few hours of data analysis I had to choose between two targets. The first was the original target near Childress, TX. I assumed everyone would be on that storm. The other and hopefully more isolated target was near Guthrie, TX about 30miles south. The HRRR model run kept placing a beefy supercell around the 6pm timeframe. That would give us plenty of time to get to our target. Models are computer simulations of what the atmosphere MIGHT do, they sometimes don't show the real-world conditions so its important to do your own analysis and asses the atmosphere yourself. Models also don't give you real time information. For that you need to be out in the field.

We arrived to Guthrie around 5pm and found a place to pull over near the high school that gave us a view of the towers developing to our west. We watched these towers try to make a storm for almost an hour, but to no avail. The cap was just a little too strong in this area right now. This is what I'm talking about with model data vs. real time observational data. Storm were going up to our north just west of Childress, TX and only 30 miles away after some more waiting we finally decided to abandon those storms. On the way to Childress we started to plan our route to intercept the most intense looking storm that was near Turkey, TX. Funny, we were just in that area a few months ago camping in Caprock Canyon State Park. As we drew closer to the storm the sunny skies became smothered by thick anvil clouds putting the surrounding area in a ghastly state. Bright flashes of pink lightning were seen bursting from the midlevels of the storm.

When we reached Childress, TX we turned west (north) on 287 and started towards Esteline. Storms started to develop all around us and we were afraid of getting caught in the core of one of the storms. But we carefully made our way to Esteline. A large hail core had just come through the area dumped 2" hail all over the town square. A few cars had their windshields busted out and broken tree limbs and bits of debris poked out against the scattered hail stones. We stopped for a brief moment to pick up and photograph some of the hail stones. After that short break we continued down State road 86 getting closer to the storm. It was a little confusing and disorienting chasing these storms as more and more kept popping up and we were right in the middle of all of them. In fact, we pulled over to observe a storm to our north unaware of what was developing back to our west. We cold not see the westward storm at this time. I stepped out to take a quick shot of the storm to our north, but only to retreat back to the safety of Jaden's truck when a stray bolt of lightning struck close by. My eyes were now focused on the approaching storm to our west. The core of the storm was just crossing the highway and we could start to make out an updraft base.

Low scud clouds were feeding into the storm and a significant cut was made by the intense downdraft. We watched as the scud tried to organize showing some nice horizontal rotation and vorticity. I wasn't convinced on our current location and I wondered what would happen if the storm decided to turn right. That core would slam right into us and we could possibly lose our windshield. Since I didn't want that to happen I suggested we head back to Esteline and get a little bit more ahead of the storm. But we pulled over for just a minute to photograph the developing wall cloud that was now just a few miles to our west. I noticed the rain curtains starting to get pulled around the updraft area and I feared the storm was turning right and heading directly to us. I told Jaden we needed to go and get ahead of this storm, but it was starting to look like it was organizing. We turned back east on 86 and then south on 287 to get our ahead of the storm. Jaden was driving and I was tasked with keeping a close eye on the developing wall cloud that was now starting to rotate.

When we got outside of Esteline, TX we pulled over off the highway to watch the storm. It was slowly making its way towards the highway, but it was only moving at 20mph. We watched as the storm started to suck in more moist unstable air and condense into a lower blockier shaped wall cloud. The whole storm was rotating now and we had an isolated supercell on our hands. The updraft got closer, but it seemed to lose of its low level rotation, but the midlevels had some excellent striated structure. Getting a few miles ahead of the storm really helped us appreciate its shape and behavior on a more grand scale. We found an excellent pull off near the municipal airport in Carey, TX and watched as the storm "turned and churned" over the flat prairie land. I got my D4 out to photograph a timelapse of this magnificent scene. But I needed a high resolution still image of this incredible storm so I decided to shoot a 6 image panorama to capture the entire updraft and mesocyclone in my composition. It took a little bit extra post processing work and time, but it was for sure worth it!

We followed this storm well into the overnight hours where it continued to give us more opportunities for photographs including some excellent lightning images. This storm had some of the best structure I have seen in almost three years, it really made me remember what storm chasing was all about and how I have missed it so. It was nice to get a real storm chase in and even better visiting west, TX. Something I haven't done (at least for storm chasing) in quite a few years. Models don't look to be favorable for severe weather in the weeks to come, but if there's one thing I've learned from this is that you can't trust model data over real observation. So I guess only time will tell.