"Stars Over the Garden"

This week's Pic of the Week was captured at the end of my first full day in southern Illinois. I spent the morning hiking with my cousin James where we covered the Trillium, Stone Fort, Indian Creek, and Giant City Nature trails. After our morning excursion it was time to clean up and get ready for the family luncheon at the Giant City Lodge. Lunch started at 11:30pm and I enjoyed the conversation and family time around a delicious fried chicken meal. Afterwards, the family had some business and I was going to be meeting up with good friend and now Illinois inhabitant, Nathan Ralston. Nathan would be joining me for some hiking and photography in areas of the Shawnee National Forest. We left the hotel in Carbondale and started off towards our first destination--Fern Clyffe State Park.

One of Fern Clyffe's greatest attractions is the Rocky Bluff Trail a mild 1 mile hike that leads to the impressive sandstone bluffs and large waterfall. Unfortunately the waterfall was dried up and only a trickle was moving in the creek. We still managed to shoot some images and the rock outcroppings made for interesting subjects. After we finished Fern Clyffe, we started off to our next stop. This time we would be heading to the Bell Smith Springs Natural Area and hiking the "Natural Arch" trail. It was supposed to be a moderate 1.5mile hike, but we ended up making it a bit longer. After finishing up at Bell Smith Springs we had just enough time to reach our next destination, Garden of the Gods. Now I know what you're thinking (and believe me, I was thinking the same thing) "Garden of the Gods is in Colorado, not Illinois." But when I started doing research for this trip I came across two places that interested me. One was the "Little Grand Canyon" and the other "Garden of the Gods Recreation Area". Being as how I have been to both of the official locations I had to check out southern Illinois' version.

The drive to Garden of the Gods was quite easy. We cruised around the local farm lands and watched as stalks of corn and fields of soybeans zip by. We were only about an hour before sunset so we were running a little behind. As we approached closer to our destination I could see a large bluff off to our north. This bluff was the highest point in the vicinity and I guessed that was where Garden of the Gods would be. When I was researching locations for this trip I knew I wanted to be somewhere for sunset. The thing is, southern Illinois is either crop fields, lakes, or forest so finding a unique sunset location would be harder than I thought. But when I discovered GOGRA I knew this would be my sunset location. The view from the Overlook trail looked to be very impressive and easy to access. It also had a great view to the west. Just to satisfy my curiosity, I looked up the light pollution map and learned it was one of the darker skies in the area. Maybe with some clear skies I could shoot more than just sunset at GOGRA.

We made the turn to state road 10 and quickly began gaining elevation. Soon we turned on to the Garden of the Gods road and a sign out front welcomed us to the Shawnee National Forest and warned up the park closes at 10pm. This would be just enough time to maybe shoot the milky way. We made our way up the bluff and the winding road to the trailhead. I parked the car and saw we had just a little over 30 minutes before the sunset. I knew I would need to quickly find a composition and set up for sunset. We started off towards the trail where signs out front warned up steep vertical cliffs and drop offs. From the trailhead I couldn't see much it was all mostly forest above a stone pathway. But we started to climb a little more up hill and that was when the beech, sycamore, elm, and oak trees of the forest gave way to the wild and unique rock formations that make up the Garden of the Gods. Now I can say, that these rock formations while impressive, were not like the Garden of the Gods in Colorado. But they were certainly unique and served as excellent subjects for photography.

I made my way through the trail taking mental notes of any composition that would work for sunset. I also scouted out locations for milky way photography. The stacked sandstone formations and hoodoos reminded me of Palo Duro Canyon, although the sandstone in west Texas is much more red. I managed to find a few compositions that I felt could work for sunset and I sat there surveying the Shawnee forest and watching the sun set below the horizon. The sunset wasn't all that impressive, mostly clear skies that turned to the familiar golden-pink color. Lack of clouds did mean one good thing, however. Clear skies would be essential for the last item on the list: Photographing the milky way over Garden of the Gods. In my location scouting I found a spot near a cliff edge that gave a nice view of some of the cliffs and forest below. I carefully set up my tripod at the edge and checked my composition for any distracting tree branches. When I saw it was all clear I backed away from my camera and waited.

During our sunset shoot we met another photographer Cylde and his family who resided in nearby Paducah, KY. Clyde isn't on any social media or website, but he showed me some of his impressive work. We sat and talked for a while waiting for the skies to darken. Slowly the skies transitioned from soft pink, to cobalt blue, and then to black skies littered with thousands of stars. This was no Texas sky like I was used to, but the milky way shone overhead and I couldn't help but be reminded of back home. The clear skies really helped showcase some of the planets in the sky. Venus was hanging low on the western horizon, where as Jupiter was bright and high in the sky. Saturn was found right in the middle of the milky way, but the red-orange planet, and closest neighbor Mars was absolutely radiant. It crept its way above the tree line and entered my composition. This really helped balance the composition and serve as an excellent anchor point for the eye to rest on. I chose this vertical orientation to help bring the elements I thought were important to the scene. This allowed me to get a good portion of the milky way and enough foreground to help you see just how far those cliffs drop. 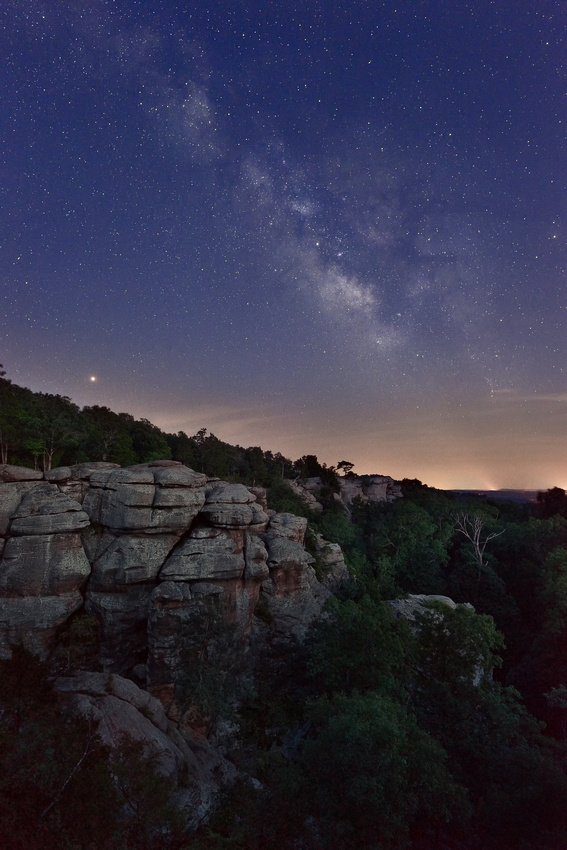 The milky way shines brilliantly over Illinois' own Garden of the Gods state park.

I love how the silhouettes of the forest contrast with the bright rocks of the cliffs. While I would've preferred a more interesting foreground, I made do with the time I had. Given the opportunity to spend the night out there I'm sure I could come back with more dynamic and interesting images. Still, I had a good time and came back with a shot I feel represents the area. We said our goodbyes to Clyde and his family and made our way back to the car. We would be returning to Carbondale for a late night poker game with some of my family (which I won by the way) before heading to bed and getting ready for the next adventure. Tomorrow was going to be a very busy day.