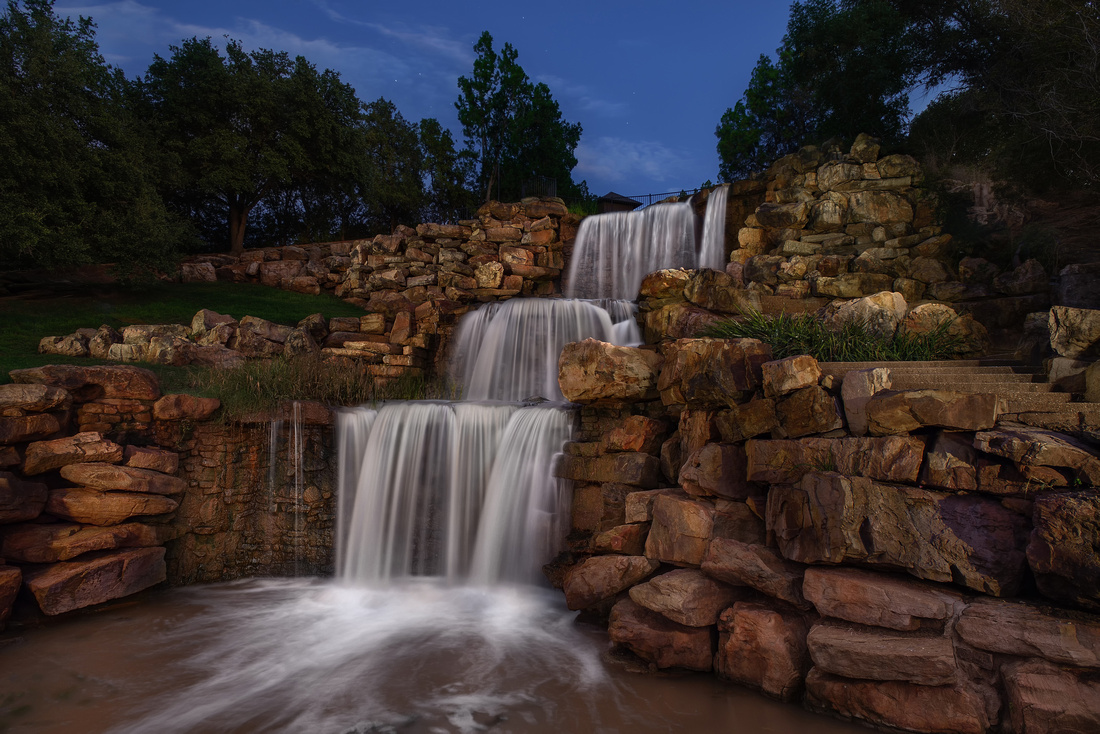 For these past few weeks I have been attempting to document some of the local landmarks for a client. To be perfectly honest, I don’t usually shoot in town. I try to escape civilization when I go out to photograph. But at the request of the client I started shooting around locally. Probably the most important and well known attraction would be the falls on the Wichita River. Driving into town you can see the falls (if they’re running that day) from the highway. And if you follow the signs eventually you can reach the falls. While Wichita Falls does have falls in the name, the original falls were along the Wichita River and were nowhere near this size—they were only about five feet tall. The original falls collapsed after a flood in 1886. Just over 100 years later the city constructed the falls we see today. This multi-tiered 54 foot waterfall was completed in 1987 and is actually quite scenic for the area.

As you would expect, this is a tourist attraction that is very popular and there are thousands of photos of the falls. I wanted to capture something different and in doing my research I saw very little night time shots of the falls. I was intrigued with the idea of capturing something that was a little more unique. So I started to plan out my shot and I came to the idea of shooting the falls at blue hour and light paint the scene. I would drive out to the falls just before sunset and find my composition. Then, I would wait for the blue hour and start firing off my flash in various spots around the falls. I would take all these images and blend them into a final composite. Since it would be difficult for me to trigger the camera and the flash, I asked for some help to create this shot. My friend and fellow photographer John Ambrose and my wonderful girlfriend Ashlee helped me during this shoot.

After the shoot was completed it was time to being editing the photo. As I scrolled through the images, I could see how the final shot would come together in my head. It took a total of 54 combined images to create the final result. The blending process and balancing all the light was the longest part, but once the base blend was made, the rest was just normal image processing. I believe I captured something that shows the falls in a new and interesting way. And from what I can tell, there really isn’t another photo like this out there. Still, I am happy that I was able to create the photo I had originally envisioned. I also got word that the client loved the photo, which is always a good thing to hear. This shoot inspired me to start taking more photos of my town and there will be a featured album where those images can be seen and/or purchased. Thank you for your support!