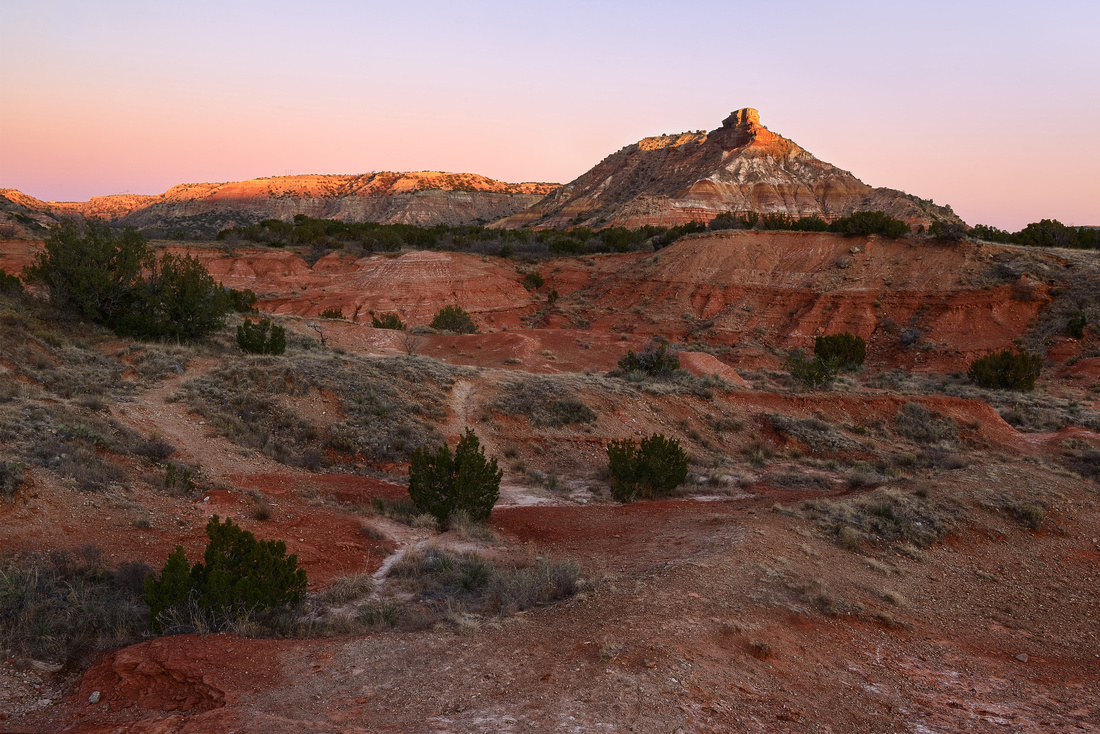 Sunrise in Timber CanyonThe first rays of light splah against the rock spires and canyon walls of Palo Duro Canyon.

“I really hope they open at 7am” I whispered quietly to myself. My 4Runner was parked outside the main gate and I was having a staring contest with a numeric keypad trying to conjure up some magic code that would allow me access to the park. I desisted that action when I remembered the chilly panhandle air that was around me. Winters in the panhandle can be something else. Thankfully, this particular winter day was completely clear, and highs were expected to reach in the upper 50s. Back home in Wichita Falls highs were going to be in the 70s. It’s a pretty big swing for only 200 miles distance. But in that time, you ascend 2000+ feet as you make your way up the Caprock Escarpment, which brings me to where I am now. No trip to Amarillo is complete without a visit to Palo Duro Canyon State Park.

The clock finally turned to 7:00 am and the gates in front of me opened. I had been sitting since 6:30 waiting for access. The sunrise was going to be just after 7:30am and I generally try to arrive an hour before sunrise so I can properly scout and find a good composition. Though I was a little behind schedule, the image I had in mind would permit me about another 20 minutes of scouting time. Once down in the canyon you have to wait for the sun to rise over the rim. I filled out my park day pass and started down the winding road to descend the canyon. No matter how many times I make this drive I am still amazed every time I see the canyon.

I could start to see the familiar pre-sunrise cyan to pink color gradient to the east hanging above the canyon rim. I pulled into a small parking lot and gathered my camera and tripod. Since there were no clouds, I didn’t think bringing the filters would be necessary. I followed a worn trail for a few hundred yards before I came to some breaks in the sandstone. These shallow draws and gullies are coaxing any hiker to explore them. After some short scouting I found a composition that I was pleased with. My main subject would be the craggy Goodnight Peak (formerly known as Triassic Peak), this butte stands out from the surrounding canyon and should catch some nice sunrise light.

Goodnight Peak is a classic example of Palo Duro geology. The base is made of layers of Quartermaster sandstone and mudstone with stripes of gypsum intrusions running through the rock. This creates a wonderful and fascinating contrast with the blood-red cliffs. A little further up you have the iconic Tecovas formation this smooth and colorful layer is my personal favorite. The blend of greens, yellows, browns, and even purples are so mesmerizing to me. Just above that, we have the Trujillo layer. This is another great level of the canyon. So many incredible geologic formations come from this layer like this one. Such a diverse and picturesque subject commands attention in the composition, and with the right light should lend itself to a nice photo.

I made just slight adjustments to my composition trying different focal lengths and positions. It was a challenge to try and keep Goodnight Peak prominent, yet still showcase the full scene. I decided for a slightly wide angle around 28mm. This allowed me to include the peak, the distant cliffs of the canyon, and the juniper trees speckled the undulating landscape. I used the trees and the trail as a leading line to the peak which was now coated in beautiful golden light. Though if I’m being honest, I would have preferred some type of texture in the sky. With the sun now rising above the rim, light started to spill over the entire landscape. I concluded my sunrise shoot and meandered along the trail deeper into Timber Canyon searching for Catarina Cave. After exploring the cave I found my way back to my vehicle and from there I continued with my planned hike to get to the top of Fortress Cliff and Palo Duro Canyon. This was one of the best hikes I’ve had in the park and I highly recommend people try it. If I’ve said it once, I’ll say it again…I’ve never had a bad day in Palo Duro Canyon. Plenty more photos will be shared from this panhandle adventure.