Well, here I am looking over my Facebook newsfeed and seeing all these chasers that made it out to the Texas panhandle and southern Oklahoma. Congratulations to all you chasers who got on the storm it looked like there was some nice structure. I opted out of this chase due to commitments to work and not being entirely convinced there would be good storms. Mother Nature does a pretty good job of making me look like a fool. Regardless, I had nothing new to post for this week's Pic of the Week and that sent me searching through past chases and I came across this photo. I actually chased this storm almost four years ago. Its hard to believe that much time has passed since then and the truth is I've had a pretty forgettable couple of seasons since. That's just how it goes sometimes, but I have a pretty good feeling about this year--only time will tell.

Early spring weather events are always fun to chase. Usually they're some type of dryline/triple point set up and you can get some really great storms from them. Though the problem with early spring events is the lack of sufficient dynamics to keep severe weather going. This could be in the form of moisture, upper level support, instability, and lift mechanisms. One concern for our chase was the residual cloud cover and lack of deep level moisture over our target area, but it was the first chase of the season and we were excited to get out. My friends and fellow storm chasers James Langford and Brad Neal picked me up in Wichita Falls and we headed out towards western, OK. Our target was Clinton, OK. Along the way we could make out some "turkey towers" going up along the dryline. Not long after we reached Clinton, storms started to break out on the dryline. We decided to head west to investigate.

The storm was not that impressive (at first), but we waited in an open field enjoying the cool spring air and admiring the bubbling convection to our west. Eventually, the storm started to get its act together and quickly broke through the cap. As it towered high and higher in the sky we stayed in place letting it get closer to our position. The storm didn't move much and pretty well hugged the dryline the entire time and after a few hours of chasing we finally let it go and fade off into the setting sun. Another storm had formed out to the southwest of our position and as day turned to evening the anvil from that storm came over our heads and into our sky. This meant we had the potential for a great sunset. We were driving around looking for someplace to set up for sunset when we spotted some newly erected wind farms to our east. These thing couldn't have been up for just a few months and the near white paint made them contrast nicely against the stormy gray background. We found a nice wheat field where we pulled over waiting for the sunset light.

After 30min of waiting and enjoying the scene, the real show started to begin. The sun broke through some of the clouds and sent rays of golden sunlight striking our storm. The falling precip refracted the light i the way a small rainbow appeared in our shot. We spent so much time photographing and enjoying the rainbow until it eventually faded away. During this time the sun began to set below the horizon and the sky above us became a stunning pastel pink/orange color. The mammatus clouds above billowed and churned like orange cotton balls in the sky. The scene was quite nice and I wanted to record more than just the sky. So I lowered myself and my camera to just below the eye line of the wheat. This gave me a nice foreground element to use and it made the sky look that much more impressive. The distant wind farms created a great anchor point relieving the view of the chaos-inducing wheat field. Normally, I consider these structures eyesores of the landscape but I must admit they gave this scene depth and scale. And of course, the sky was just incredible. A sliver of blue gray near the horizon also added more depth and brought an excellent complementary color to an otherwise, analagous color palette. 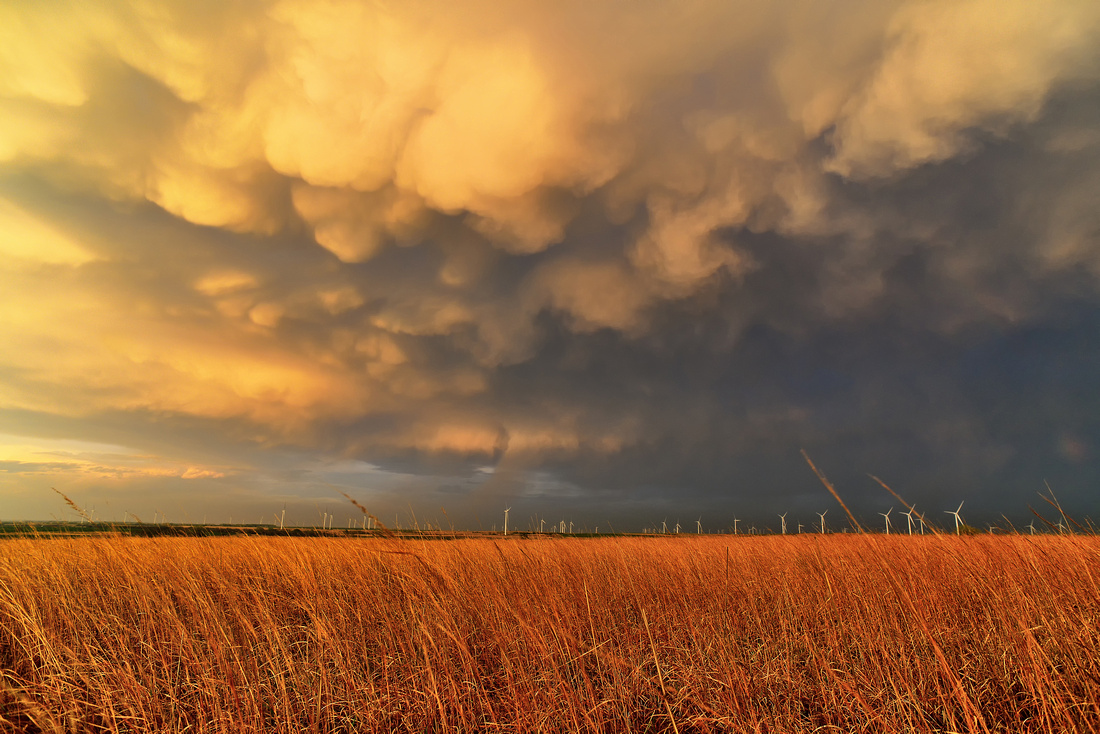