Location: Between Kamay and Electra, TX

The end of May is upon us and I think I have chased more photogenic storms this past month than I did all last year. Now that is not saying a lot since I barely chased last year, but it seems we’re back to a normal amount of severe weather. In fact, we’ve had a multi-day storm system setup that has seen short waves of low pressure over our area with strong winds aloft, under an unstable and moist airmass and the result has been numerous thunderstorms all around the southern plains. I had the opportunity to chase a photogenic storm not too far from home. My good friend (and now roommate) Jaden joined me on this chase.

Storms were forecast to fire up after 4pm along the dryline to our west. The HRRR was putting a fairly nice supercell over Seymour, TX right before dark. I was as usual working until 6pm that evening and had brought my camera just in case there could be a local chase. Storms began to develop after 5pm and after work I met up with Jaden at the apartment. We decided to target a close developing supercell just to our southwest. As we drove closer to the storm the low clouds and haze gave way to reveal a low-contrast supercell. I could make out the rain free base and the anvil. But that was just about it. The sun had lowered itself in the perfect spot between the sky and the storm. This greatly reduced the contrast to our storm and it wasn’t until we were almost on top of it could I make out some of the structure.

A robust updraft was towering into the blue sky above and a dark low hanging wall cloud was hovering just above the countryside. As we tried to get in to position to intercept the storm I noticed a horizontal funnel try to extend from the occluding wall cloud. It was brief, but still impressive and due to my hands being on the steering wheel I was unable to make a capture of the vortex in question. Something that would become a theme throughout the chase. Finally, we were able to find a decent area to pull over that didn’t have powerlines or mesquite trees in the way. We decided to stop and let the storm cross highway 25 near Kamay, TX. During that time the storm moved off to our north, but not before giving us a great view of the rotating wall cloud. Little fingers circled the wall cloud calling our attention to the possibility of tornadogenises.

While I enjoyed the storm structure and the local chase, I was having a hard time finding an interesting foreground to incorporate in the composition. I noticed these weeds sprouting up from the dirt and I liked the vertical lines they made. There was also left-over rain trapped in the ruts of the plowed field these micro pools reflected the gray and blue skies giving a nice sheen to the landscape. These reflections added some more depth and dimension to the field. Then the storm started to put on a show as it made several attempts to organize its wall cloud. 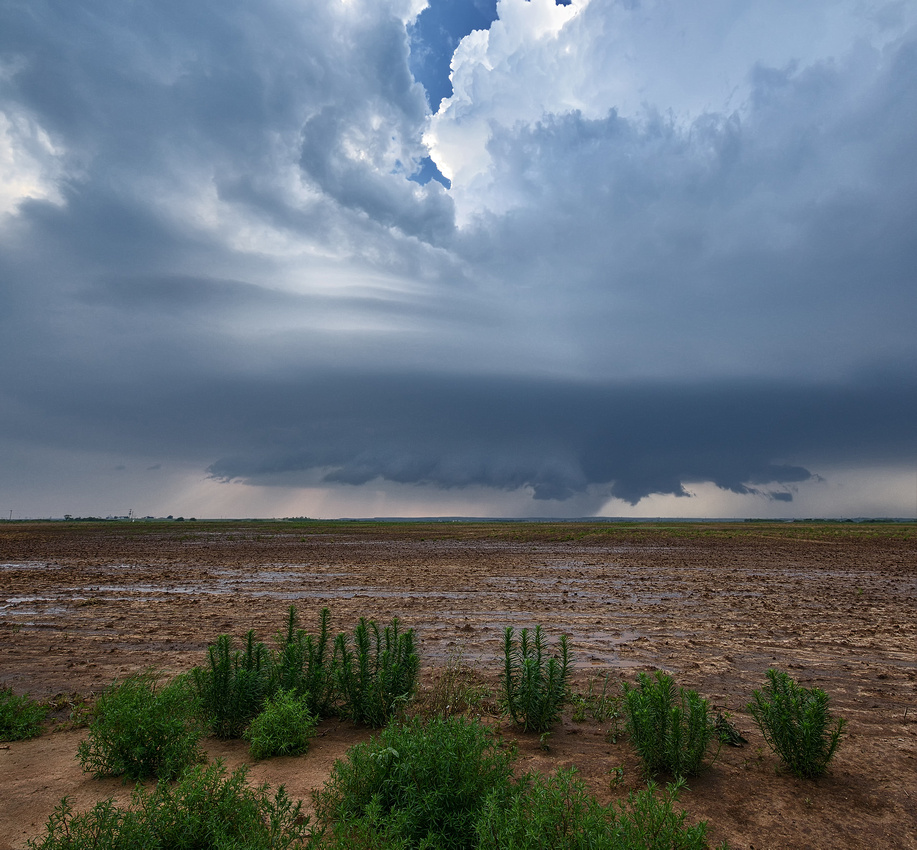 I made this capture, but I actually had to take two images and stitch them together to get most of the storm in the frame. This led to the unusual photo ratio that only works with some compositions. Here, you can see the remnants of the old wall cloud and the newer meso forming to the northeast. The RFD is creeping up toward the backside of the storm and rays of late afternoon sunlight are shooting from the base on the left side of the storm. Towards the midlevels of the storm there is a very nice double inflow band feature and helical striations to the updraft tower. And finally—nearly above our heads—we have the white caps of the updraft that are contrasted against the keyhole of blue sky peering through the background. All in all, the photo turned out pretty well and it was a very fun chase. Despite the fact that I missed photographing a funnel as I was driving (yes, another one).  Jaden was fortunate to capture a photo, however and I’m only a little jealous.