After a slow start to the storm season, 2019 has kicked in high gear. Just this week we had two severe weather events in town. One produced a photogenic tornado just 10 miles from my work. I did not get to chase that storm. We had our fair share of the weather with heavy rains, small hail, and crazy intense lightning. Yet despite all this, I was upset that I missed a tornado so close to home. Unfortunately, the tornado did destroy part of pecan orchard outside in Charlie, TX. Missing these type of severe weather events puts me in a funk and the only thing that will cure my SDS (Supercell Deprivation Syndrome) is a good ol' storm chase. But even if the chase is terrible and I'm able to pull out my camera and capture some pixels, it can make it all worth it. Sometimes I get a great chase with great photography. Other times the scales are leaning towards one side. But I have to keep reminding myself, I don't chase for tornadoes--I chase for storms.

Wednesday was supposed to be another severe weather day and once again I was working and couldn't chase. There was a tornado on the ground between Seymour and Throckmorton just an hour away from Wichita Falls. Had I been able to leave I probably would've caught it. But there I was sitting at work watching live streams and staring at radar data. Once again I was put in a foul mood for missing storms, but there was some hope in sight. Storms moved through Wichita Falls once again and we got more heavy rain, small hail, and close lightning. But eventually the storms moved off and continued east with the front. The anvil of those storms stretched above our sky and mammatus clouds could be seen bulging out. To the west and below the cloud line there was a strip of blue sky. This gave me hope we would have a great sunset with mammatus clouds later that evening. After work I picked up my girlfriend Ashlee and we drove out to Lake Arrowhead with the idea to shoot some lightning over the lake.

All through the shoot I kept looking back to the west making sure the sun was going to set below the cloud line. Sure enough the sun sank below the clouds and the storms to our south and east ignited in a warm fiery glow. As the sun drew closer and closer to the horizon, a brilliant double rainbow revealed itself in the clouds. All around us bright flashes of lightning were bursting from the storms in the evening light. I thought it would be excellent to capture the rainbow and lightning in the same frame, but the foreground wasn't that interesting. The road we were next to curved along the dam of the lake and I thought I could incorporate that in my composition. I quickly walked to the middle of the road paying attention to any signs of approaching vehicles. There were times when I need to get off the road and as I lifted my camera and tripod a big burst of lightning would explode from the rainbow.

Finally the time was right. The light was spectacular, there were no cars coming, and my settings were locked in. All I needed was some lightning. I set my camera down checked my focus and shot off several 20 second exposures praying the lightning would strike. When everything seemed like it was a wash I decided to make one last capture before the rainbow vanished. During those twenty seconds a few eruptions of lightning occurred in my composition. I was able to capture six lightning strikes in my frame below a stunning rainbow arc, in gorgeous and dynamic light, on a close to home chase, with my wonderful girlfriend beside me. Who even need's tornadoes?!?! 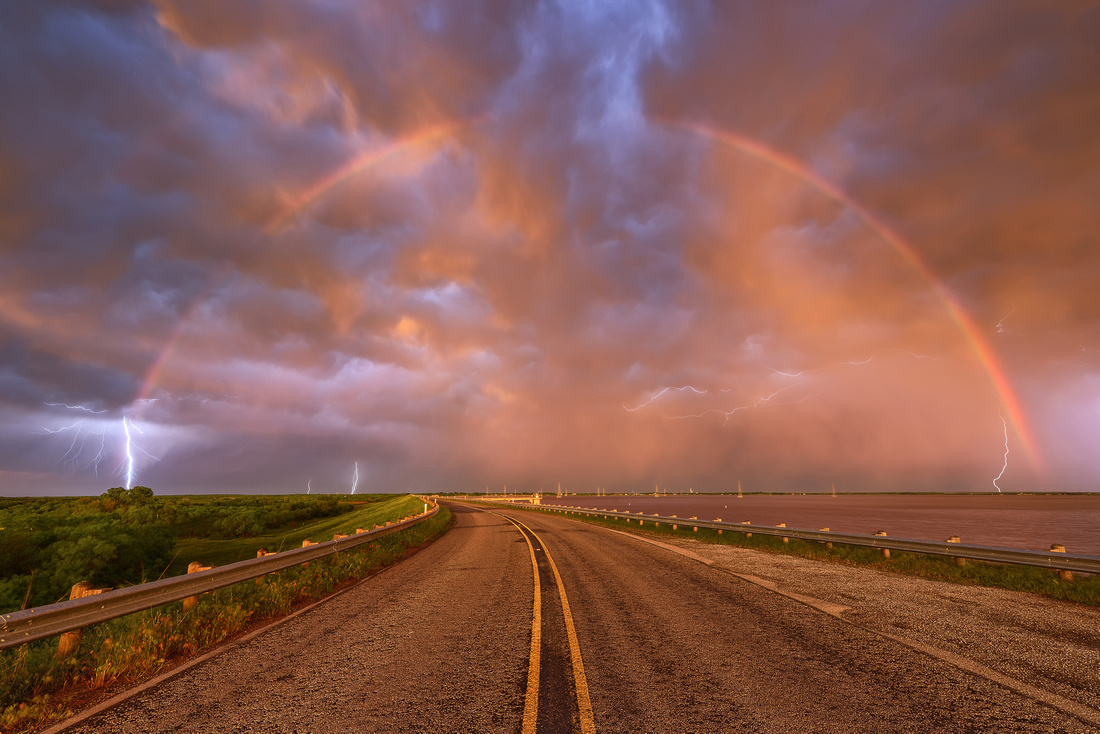