Earlier this month I made a trip out to a family reunion in southern Indiana. We would be staying at the lodge in McCormick’s Creek State Park for the duration of our visit. It was great getting to see my family and spending time with them, but I also had a chance to get out and explore the local landscape of southern Indiana. This trip would take me on adventures in McCormick’s Creek State Park, Cataract Falls, Blue Spring Caverns, Spring Mill State Park, Brown County State Park, and Shades State Park to name a few. I photographed subjects ranging from impressive waterfalls to underground river caves. I have captured some interesting images this trip and I can’t wait to share them all with you. Now we will jump into the story of this week’s Pic of the Week.

I awoke around 5:30am to prepare for a sunrise shoot. Yesterday was a longer day. We flew in from Wichita Falls Regional Airport to DFW (Dallas/Fort Worth) International Airport. We were almost denied access to our flight to Indianapolis because they oversold the flight. Thankfully, we were able to board and not miss our flight. After landing in IN I hung around at the airport waiting for my sister’s flight to arrive. We had a family reunion scheduled this week and all of my siblings would able to attend, which can be a rare occurrence.

I rubbed my eyes trying to convince myself it wasn’t really this early and that I could go back to my bed. Unfortunately, both my watch and my phone confirmed the pre-dawn hour and it was time to wake up. I had set out for a very simple goal this morning: photograph Canyon Falls and hike Trail 3. Canyon Falls is probably the main attraction to McCormick’s Creek State Park. I imagine the creek and falls are flooded with locals and outsiders trying to cool off and beat the summer heat. But nobody was up at this hour—after all who would be so crazy?

I gathered my camera gear and headed down the stairs of the lodge to find the lobby empty, even the front desk had no one behind it. It was just that early, I guess. I walked out the door and through the parking lot to the trailhead. That was one great thing about the lodge, it was right next to trail that takes you to the waterfall. Trail 3 was short—even less than one mile—but it offered some great views of Canyon Falls.

I started my hike on Trail 3 and after a brief walk reached the falls overlook. This gave me a nice view looking down on the falls and creek. But I wanted to be closer, so I continued down the trail and met a concrete staircase that gave me creek access. I followed the creek upstream for around 30 yards before settling into a composition. The next hour I moved along the creek photographing the waterfall and enjoying the scenery. What I did not enjoy, however, was the heat! Even this early in the morning it was still almost 80 degrees and the humidity was hovering between 92-95%. My lens and glasses would fog as I got closer to the waterfall and I began to perspire in the dank conditions. That warm and that humid meant I wouldn’t be able to cool off, except of course for the creek below my feet. 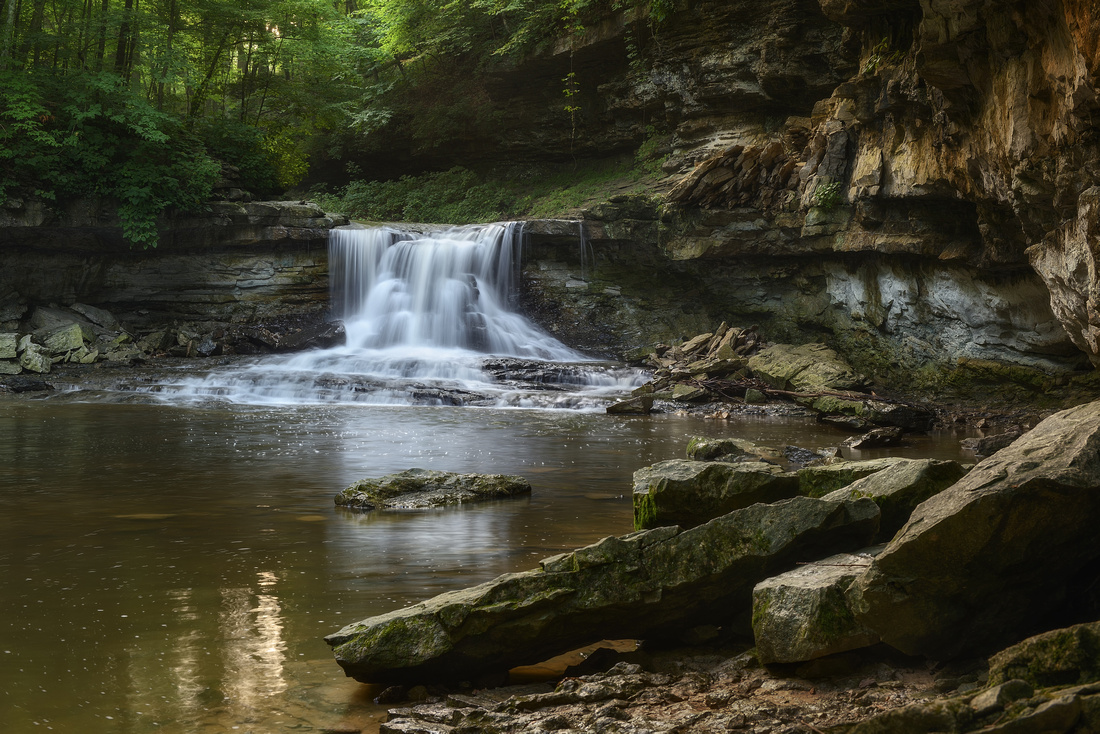 As the sun began to rise, the humidity did start to lessen, but I was too busy focusing on capturing the waterfall and creek before me. The falls wasn’t extremely impressive (maybe about 10 feet), but it did serve as a good subject and something to focus on in the photograph. The white water broke the monotony of the green landscape around it. The tall limestone bluffs hugged along the creek where large boulders were strewn along the bank making some nice anchor points to use in my composition. I spent about an hour photographing the falls and then continued on Trail 3. There were several more areas I explored and photographed along the way, but for now I thought the waterfall would be a nice introduction to this trip. There are many more adventures from Indiana in the upcoming weeks.