Continuing with my adventures in southern Indiana we find ourselves on the second full photography day. This day was a very interesting day. I left McCormick’s Creek and headed south towards Bedford, IN. My goal was to reach Blue Spring Caverns, which is Indiana’s largest navigable river cave. This unique park offers boat tours of the cave—that’s right, tours of a cave via boat. Naturally, I jumped on the opportunity. I’ll save the images from Blue Spring Caverns for another blog entry.

After Blue Spring Caverns I made my way east to visit Spring Mill State Park. It was already starting to heat up under the hazy summer sky and I had planned a longer hike, but upon arriving I decided my time would be better spent (photographically) if I just got to my target early. This would help me avoid most of the Sunday afternoon crowds. I parked along the Trail 3/Trail 4 junction. In front of my car was a informational kiosk that mapped out the state park.

“You are here” an arrow pointed in the parking lot on the map. I followed the dashed Trail 3 line until it reached my target, Donaldson Cave. While researching for this trip I came across images and videos of Donaldson Cave. The mouth of the cave is very tall and very wide, especially when you compare it with some of the other nearby caves. A spring runs through the cave and empties into a nearby creek. This was looking to be a very interesting subject to photograph.

I started my hike along Trail 3 and immediately found myself descending a wooden stair base, switching back and forth between the karst topography of the area. Shortly after the descent, I was now at the same level as the creek. Crystal clear water streamed over rocks and old tree branches forming a series of small cascading waterfalls. The clear waters reflected the harsh late-morning sun and the droplets crashing into the rocks resembled diamonds gleaming in the sunlight. I followed the trail to the entrance of Donaldson Cave. I stopped for a moment to collect my thoughts and drink in the beautiful scenery.

There was a family of four that were enjoying the refreshing waters of Donaldson Cave by wading in the little creek. I was a little disappointed to find people here, but the wonderful scenery made it easy to just block them out. I got closer and closer to the cave entrance and that was when I discovered there were even more people in the cave! A group of adventurous hikers were climbing their way into the cave system, which would be quite challenging given the narrow footholds and slippery rocks. But I wasn’t worried, I just set my camera up and waited for them to move out of my composition.

The cave’s mouth is quite large spanning across 40 feet and around 30 feet high. There are two water channels on left and right walls of the cave. These channels meet with the main artery of the spring that cuts through the center but narrows to an almost impassible width. This forms the “Y” shape of the cave system. From the spring the cool water meets the hot humid air and condenses forming a layer of fog and mist at the mouth of the cave. The cave sent puffs of fog out of its mouth. This gave the cave an eerie feel and combined with the low rumbling of the spring water almost made it resemble some sort of sleeping dragon.

I set up my camera and found my composition and waited for the indirect sunlight to enter the cave. This would light up the incredible cave walls. You can see all the different layers that have collapsed by erosion as water would seep through cracks and pores of the rock. The calcium carbonate would dissolve the layer below it causing the whole rock to collapse forming the cave. The strata and rock formations were just incredible and mesmerizing to look at. 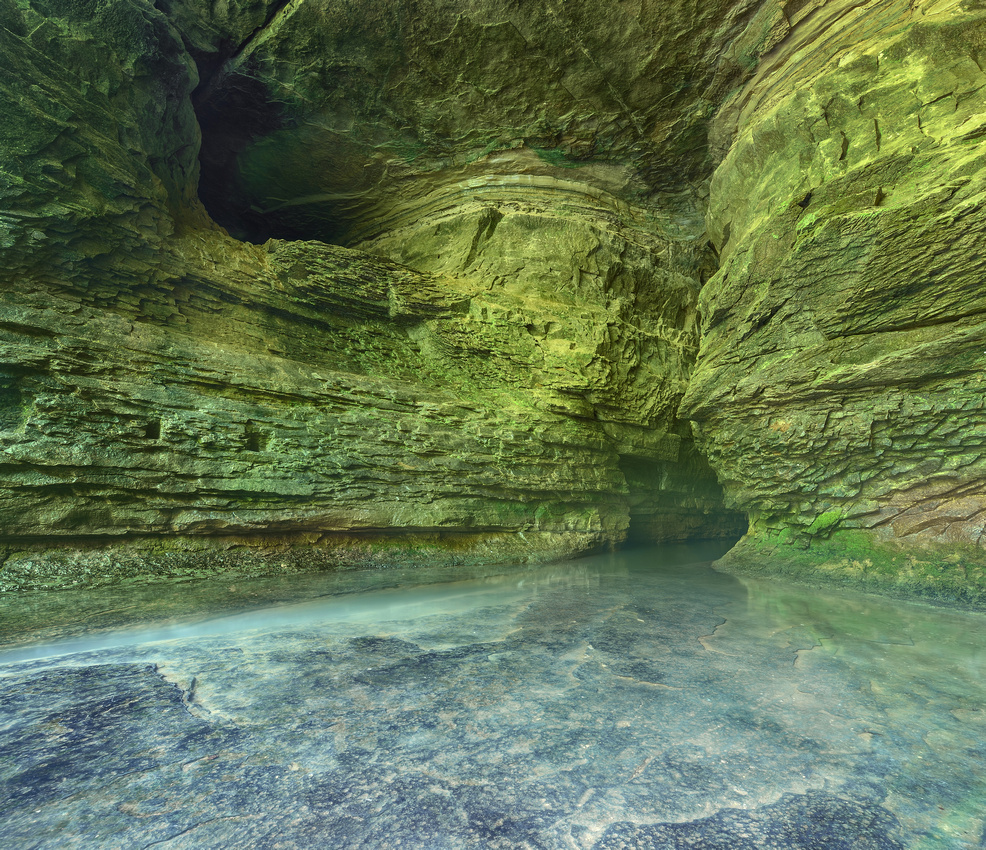 Eventually I started making images as people started clearing my composition. For this shot I had to shoot two images to get both the foreground and the roof of the cave. Normally, I would just shoot a wider angle, but I was already at the widest focal length of my lens (15mm). This cave entrance was quite large. I took one exposure of the foreground and then tilted my camera upwards to include the roof and made another exposure. I combined the two in PtGui to make the final panorama. I love all the textures and color in this image. The turquoise color of the water, with the fog/mist make it almost look like ice and adds an other-worldly feeling to the image. The walls were lined with lichen and moss that glowed the brightest green in the sunlight. In this shot you can see one of the water channels in the upper left. These are the walls those adventurous hikers decided to climb to reach the channel. The other one would be just over my right shoulder and is out of the frame. But the main creek is cutting through the scene from bottom left to center. The gap is the main spring and the narrow passageway that would take you through the cave. Unfortunately, that area is closed to help protect the bats from White Nose Syndrome a fungus that is responsible for killing off millions of bats in the North America. Special permits and guides are required to hike Donaldson Cave. Maybe one day I will get to fully experience the rugged beauty of this cave. But for now I am more than happy to share my experiences. There are still plenty more Indiana images coming in the next few weeks!