“Nightfall on the North Shore”

Picture this: You’re standing on a beach with the sand between your toes taking in the sights around you. In front of you the waves come washing in along the shore. There’s a clear blue sky hanging above a skyline of craggy granite mountains off on the horizon. Behind you sand has compacted together forming small dunes that line the beach. You might be thinking this “tropical” oasis is somewhere near the Gulf of Mexico, or maybe some where along the coasts. But you would be wrong. Believe it or not you are in Lone Wolf, Oklahoma at Quartz Mountain Nature Park just north of Altus. While it certainly is not a “tropical oasis” it does have a similar charm. Of course, instead of palm trees you have mesquite trees. Instead of the ocean you have lake Altus-Lugert. And instead of waiters bringing you daiquiris, you’re drinking water from your hydration bladder in your hiking bag. But still, you are absolutely mesmerized by this picturesque location.

This Labor Day I got to take my girlfriend and my roommate to Quartz Mountain. I have been visiting Quartz mountain for several years now and I was excited to share it with my friends. I was especially excited to share with them the Eagle Roost ATV/ORV area. Personally, I refer to it as the North Shore Sand Dunes. While we weren’t doing any off roading we were still traversing the sand by foot. Since my first visit to these sand dunes I have been fascinated with the idea of capturing a night shot of the area. Thankfully, that fantasy was brought to reality this past Monday. I had spent some of the afternoon showing and exploring areas of the park. But our main goal was to shoot sunset and possibly the milky way over the sand dunes on the North Shore.

We arrived a few hours before sunset and set up a small picnic for dinner. I always enjoy eating food on location. Nothing like a good meal with changing scenery. After dinner it was time to start scouting for sunset/night time. I walked along the dunes (trying to be careful not to step on them) looking for a composition that would frame all the aspects of the location. I wanted to get the dunes, the milky way, the lake, and the mountains in the same shot. This proved to be quite the challenge. But after much scouting and exploring I found a composition that I believed would work for the shot I had envisioned. Probably the hardest part was finding a pristine untouched dune. After all, this is an ATV/ORV area and judging by the tire tracks left in the sand, it was heavily used. I did find my dune, however, now it was time to frame up a shot. From my perspective I could see the mountains off on the southern horizon, the dune was framed as my foreground, and the milky way would be appearing right above it. I locked my composition and waited for nightfall.

After the sun went down, I thinking how I wanted to capture the image. I knew it was going to need to be a time blend stack. I could not capture the detail in the sand dunes with a single night exposure. So, I shot a series of images from blue hour to around 10pm that night. During which, the milky way dazzled in the night sky. Sometime after dark the lights from the lodge and art center turned on putting a splash of warm color in the far background. Normally, I try to remove this light pollution from my atro-landscape images, but this worked to break up the monotony of the blue color in the photo. This also adds some more depth to the image. Overall, I was quite happy with the final result and I feel I captured every important aspect that makes this location so unique. You can see the dunes, the beach, the lake, the mountains, and the milky way all in one shot. If you have never been to Quartz Mountain Nature Park and/or the North Shore Sand Dunes I highly recommend you get out there and check them out! 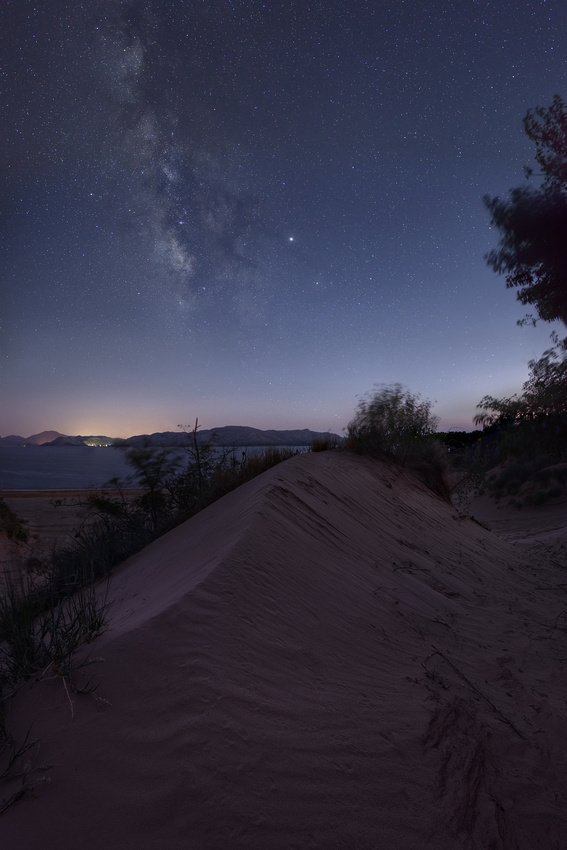