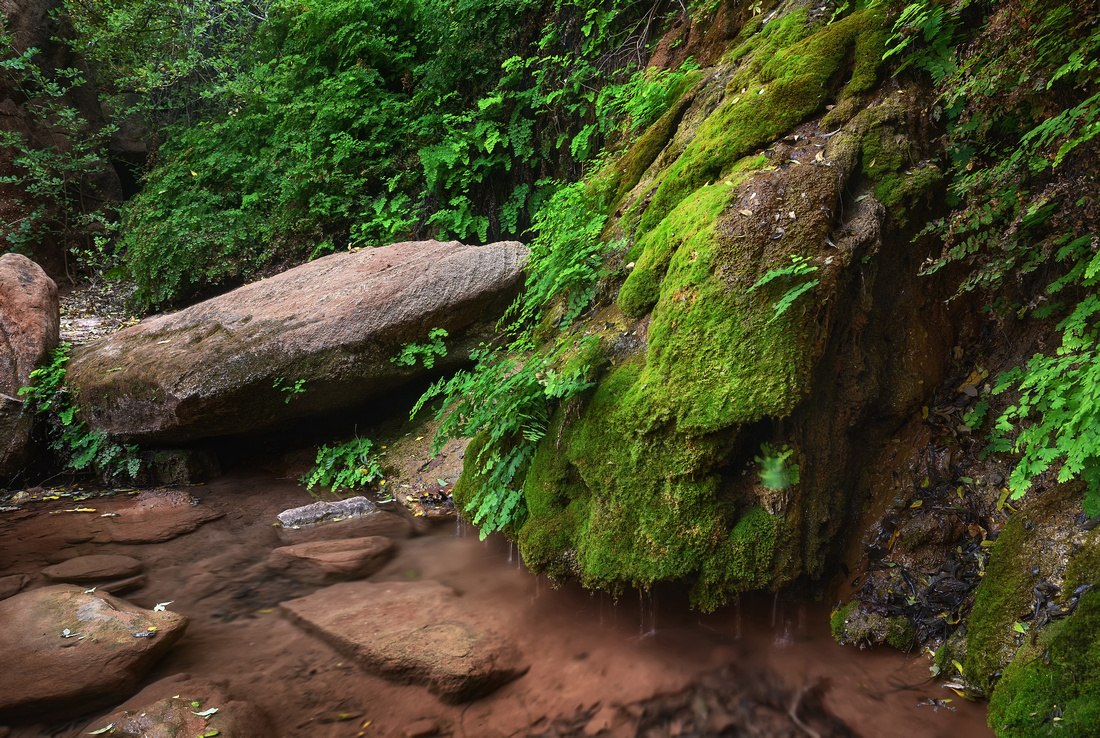 Dickens SpringSpring water seeps from the porous rock in a sheltered canyon near Dickens, TX.

Earlier this month I had to opportunity to visit the Caprock in west Texas. Its not too often I’m out that way, so I tried to make the most of it. My boss was needing a ride to Lubbock, TX to pick up a vehicle and I agreed to drive him out there. On that Saturday, we went straight from work to Lubbock. Since we were not on a time schedule, it was quite the leisurely drive. We wanted to stop at the “Narrows” rest area outside of Benjamin, but sadly they were closed to renovation. We continued driving west but the next rest stop wouldn’t be until Silver Falls in Crosbyton, TX. I suggested we make the detour to the Dickens Springs Park in Dickens, TX.

I had heard of this place before and have driven by it a few times, but I had always wanted to stop there. After all, its called Dickens Spring, so at the very least I would expect to see some kind of water. I will say that I had very low expectations due to the minimal rain the area had received. I believe it was somewhere around the 6” mark—very, very dry. I was anticipating the springs would be dry as well. We pulled up to the park entrance and when reaching the fork in the road, we went left. The road ended with a gravel/dirt rounded parking area where a group of about twelve people were celebrating a birthday. We climbed out of the vehicle and started searching out the area. After some looking we found the entrance to the springs. A steep metal staircase installed on the cliff edge led us down to the canyon floor.

I was shocked at what I saw. The face of the canyon was blanketed in upside down ferns dangling from the sandstone. Water was seeping from the porous rock and collecting in a crystal-clear stream down below. The stream flowed down the canyon floor where more water collecting ferns clung to the rocky walls. Small waterfalls and pools formed along the stream. Tall pecan trees stretched overhead forming a protective canopy over the spring. Water dripped from the ferns making a "ploink, ploink, ploink" as it entered the stream. It was almost like nature's own xylophone. For a minute, I forgot I was in Dickens, TX. It reminded me more of a miniature Fern Cave in Caprock Canyons or a smaller Gorman Falls in the hill country. I was astounded and a little embarrassed I hadn’t checked out this location before. We spent the next hour or so exploring and admiring the natural springs, but I did not pull out my camera. Instead, Ashlee and I decided we would return to the springs the next day.

After spending some time in Yellowhouse canyon we made our way back to Dickens and to the spring. Just like before we descended the metal staircase and found ourselves face to face with spring. I had already decided where my photo was going to be. A small side canyon just off from the main stream housed a stunning moss covered rock that was dripping with natural spring water. Nearby some boulders had collapsed and fallen into the stream adding another sense of dimension to the scene. We arrived a little earlier than the previous day which gave us a some more opportunities with the light. We spent the next few hours photographing and enjoying the springs. I can’t believe all this time this beautiful natural landscape was here and I think back to all the times I ignored it assuming it wasn’t worth my time. I’ve never been more happy to be wrong.