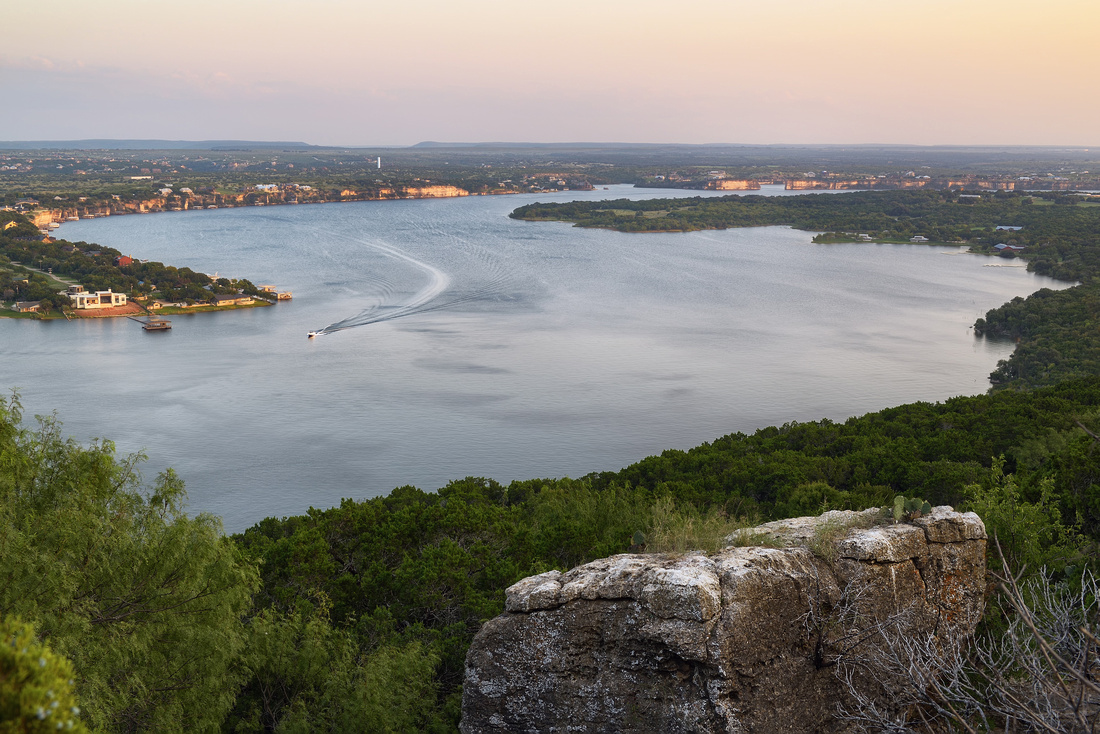 To cap off my camping trip to the Palo Pinto Mountains, I decided I would visit Possum Kingdom Lake. It was on my way back from Strawn and no trip to the Palo Pinto Mountains area is complete without a visit to this iconic lake. Hailed as the northern extension of the hill country, the Palo Pinto Mountains start just upstream of the lake in the Brazos River valley. Here the Brazos river transitions from the salty red beds of west Texas to the wooded cross timbers region. The change is quite dramatic. The terrain quickly transforms to steep rocky canyons and juniper-topped mesas. From the tops of these mesas, you would have a commanding view of the neighboring landscape. That would be my goal for this evening’s hike.

Johnson Peak is a popular location along the Possum Kingdom Hike and Bike Trail and its easy to see why. Its one of the tallest public points to the area rising to an elevation of 1350ft. You’re 350ft above the surface of the lake and there is a 360-degree panorama view from the summit. This would be my target and my plan was to hike to the summit and stay until after sunset. I had an idea for the type of image I wanted to capture, and I suspected with the right conditions I could end up with a great photograph.

I began my hike in the later afternoon. Although, it wasn’t going to be a strenuous one, I did expect to gain elevation quickly and, at the time, it was a warm 96F. I made sure to bring plenty of water and cut down the weight of my pack as much as I could. The hike would only be around 2.7 miles round trip, but since I am a little out of practice in hiking, and I would be descending in the dark, I was going to take it easy. With my gear all packed up, I started on the trail.

About a half mile into the hike I came to the Bone Bend overlook. This was the first real view of the lake from the trail and although I was only about halfway up the peak, the view was still impressive. I could see for miles looking down the lake. Bone Bend was named for the large number of bone fragments found near an old Keechi village. I stood on the overlook pondering what other pieces of history had been inundated by the lake. This made me reflect on some of the stories from John Graves novel “Saying Goodbye to a River”. After the brief respite, I continued on the trail. Soon the trail began to aggressively switchback as I gained more and more elevation.

I came to a junction in the trail and a metal sign pointed me in the right direction. I followed the trail for another half mile and met with another trail junction. This one just simply said “To the top” with an arrow pointing up and I pressed forward. Soon the trail became more rocky and I found myself stair-stepping my way up the hill. Finally, I made it to the last leg of the hike. All I had to do now was reach the summit and there are two ways I can do this. One, is to just follow the trail, but the other way is far more exciting. I would take the latter and scramble my way through boulder splits and ducking and jumping over tree roots. At last I had made it to the summit—and with an hour and a half to spare. I explored the summit drinking in the fantastic panorama view before me. I took a short water break and had an apple on the summit with nothing but my own thoughts a couple dozen vultures to keep me company. Just the way I like it.

I finished up my break and immediately started scouting for my sunset location. I already had an idea for the shot I wanted to capture so now I just needed to fine tune my composition. I wanted to showcase the terrain and ruggedness of the area, but also wanted to include the main draw to Possum Kingdom, i.e. the lake. I found a wonderful spot where I could use a large sandstone boulder as an anchor point to my scene. This also added more depth to the photograph and broke up the monotonous trees in the middle ground. The lake made a fantastic “S” shape curve as it twisted its way around the tall cliffs and bluffs out to an area known as Hells Gate. With my composition locked in, now all I had to do was wait for the light.

I must admit, I was a little more hopeful for this image. Small cumulus clouds had started to build to my east and I anticipating them to enter my composition. Sadly, most of the fantastic clouds stayed further east and I was left with an uninteresting sky. Thankfully, my composition placed more emphasis on the foreground than the sky. The sun drew lower and lower to the horizon and began lighting the cliffs in a warm luminous glow. I was amazed at how well I could see the cliffs light up from such a long distance. I thought to myself “If only I could get a boat to drive down the lake it could make the shot better.”

My prayers were answered, as I watched a small watercraft leave the Hell’s Gate area and make its way around Gaines Bend right in front of my camera. The light was in place, my composition was interesting, and now I had another element to incorporate in the shot. This was the cherry on top and although I would’ve preferred a more photogenic sky, I still feel I represented the location. After all, what comes to mind when you think of Possum Kingdom? Answer: tall cliffs, cactus, juniper trees, Hell’s Gate, the lake, and water recreation. With success stowed securely in my memory card, I gathered up my gear and began the trek down to my vehicle, hiking by the light of my headlamp and a waxing gibbous moon.