We’re getting to that time of year again. The time when I brave the cold, wind, and lack of sleep to shiver under a canopy of stars counting meteors whizzing by. The Geminids meteor shower is upon us and some have already been out to photograph it with success. Its been a while since I’ve captured this meteor shower. Full moons, full clouds, and full schedules kept me from shooting the shower over the past couple of years, but I am excited to report that we will be near new moon so if our skies are clear, I should be out photographing the meteor shower. The only question is where do I want to shoot it? Thankfully, I still have a few days left before peak (Dec 13-14th) to find an interesting location. The prospect of getting to document this event made me nostalgic on some of my past Geminid encounters.

This photo was captured with my friend and fellow photographer, Nick Barnes. Nick and I had gotten permission to access an old homestead just outside of Petrolia, TX. Normally this is too close to the city for light pollution free skies, but the subject was so intriguing that I didn’t mind dealing with the light pollution. We arrived on location just after sunset and I began scouting out the interior of the house. Upon entering the ramshackle homestead, a barn owl hissed and sprung from the rafters on the ceiling diving towards us, but swerved at the last second through an open window—I guess this house wasn’t abandoned after all.

After scouting out the house, I moved to the outside to examine the perimeter and look for an interesting angle. I really wanted to showcase the house and its interesting architecture. I found an angle that featured the most windows and doors that showed into or through the house. This would create the most depth to the structure. Once satisfied with my angle and composition, we moved back into the home and placed an LED lantern in the middle of the room. The light spilled out of the openings in the walls and windows giving it an eerie glow. We came back outside and did a quick light paint over the front of the house to add even more detail to the run-down structure. Now it was time to wait for meteors.

We spent the next few hours talking about life and counting meteors as they flew by overhead. Overall, there are over 30 meteors in this photo. The Geminids are known for producing long lasting and bright meteors and if you’re willing to brave the cold and late nights you could be in for a good show this year! 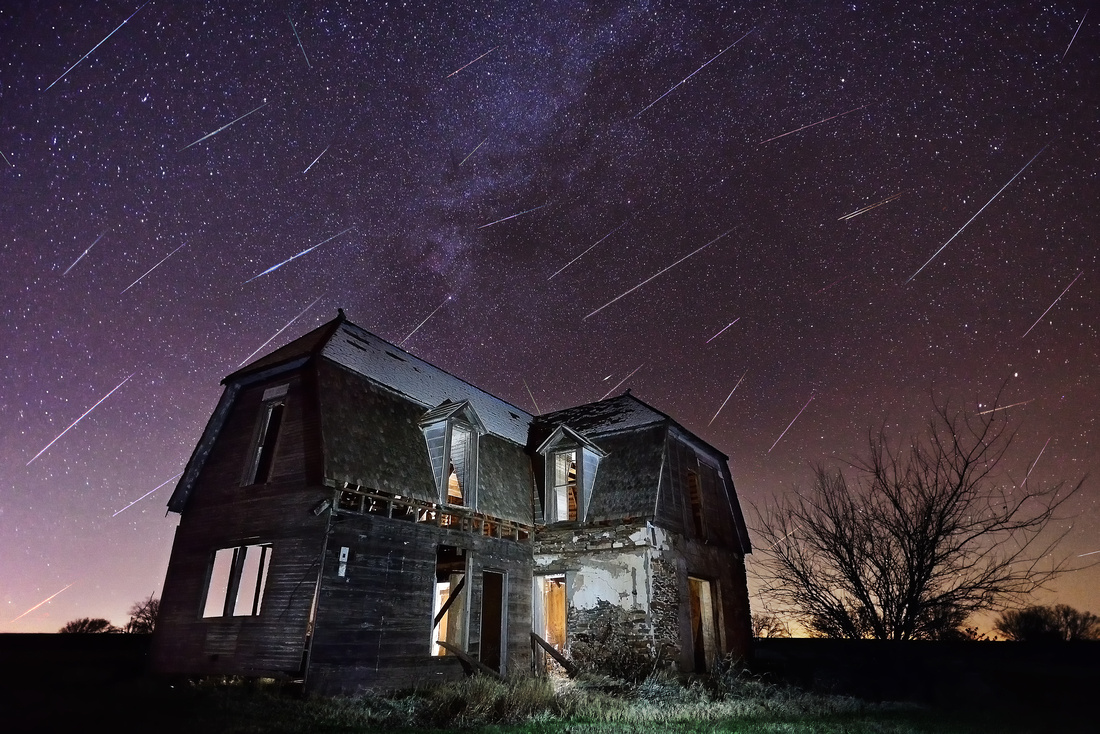