It has been a while since I posted anything to this blog, allow me to explain. After my hike to PDC in February I was ready for another slot canyon hike that following weekend, but during the first part of the week I got sick and was sick for several days—sadly no hiking for me. After I was sick the next weekend was going to rainy for any good slot photography and now it looks like slot season is just about over. Now it appears more and more cities are being quarantined and locked down due to the spread of the virus. If that’s the case for Wichita Falls, then that means no hiking for at least a few weeks. But storm season is just around the corner which has me excited and hopeful.

Last weekend Ashlee and I practiced social distancing with Mother Nature and took a trip to the Wichita Mountains Wildlife Refuge, I had not been there since December, so I was happy to be back. With the recent rains the area has received I thought it would be a nice idea to look for and photograph some of the waterfalls in the refuge. When we arrived at the refuge low hanging clouds and fog were coming up from the south and southwest. Several of the Wichitas mountain peaks were covered by fog and others were completely invisible. This made for some great atmospheric landscape shots and we decided to set up at the Quetone overlook. This is what I believe is the quintessential view of the Wichita Mountains. On a clear day you can see Mt Scott, Mt Scott’s Boy, Hunting Horse, Hill, Quetone Point, Mt Wall, Mt Sheridan, Mt Roosevelt, Central Peak, and the Fort Sill mountains, but today we could only make out Quetone Point, Hunting Horse Hill, and Mt Wall, and Mt Scott’s Boy. The rest were shrouded in a thick layer of fog.

After exploring a few waterfalls (future blog post coming) we decided to call it day. But before we left, I proposed we go drive up Mt Scott. Ordinarily, I wouldn’t even bring it up. I’ve photographed it so many times that its hard to find anything new and with the number of tourists it attracts its hard to feel immersed in the landscape. But now there was a layer a fog and clouds just around the summit. Normally you couldn’t pay me to go up this mountain but put some fog and drama in the mix and I’ll be there! I made the familiar drive up the winding road taking in the views along the way. About ¾ of the way up our views started to become hazier and eventually we couldn’t even see the landscape 1000ft below us. I was pretty excited.

We parked our vehicle at the summit, and I was shocked at the number of visitors that were congregating in the parking lot. We took off away from the tourists and boulder hopped our way to the sw side of the summit. There I saw a distinctive old cedar tree near the cliffs edge. This tree had a lot of character and would make an excellent subject. The tree is gangly and weathered and has significantly more branches on the left side making it a unique shape. The tree looks like its stretching itself as far away from the trunk as possible. No doubt the strong winds on the summit have helped shape the tree into the gnarly form. 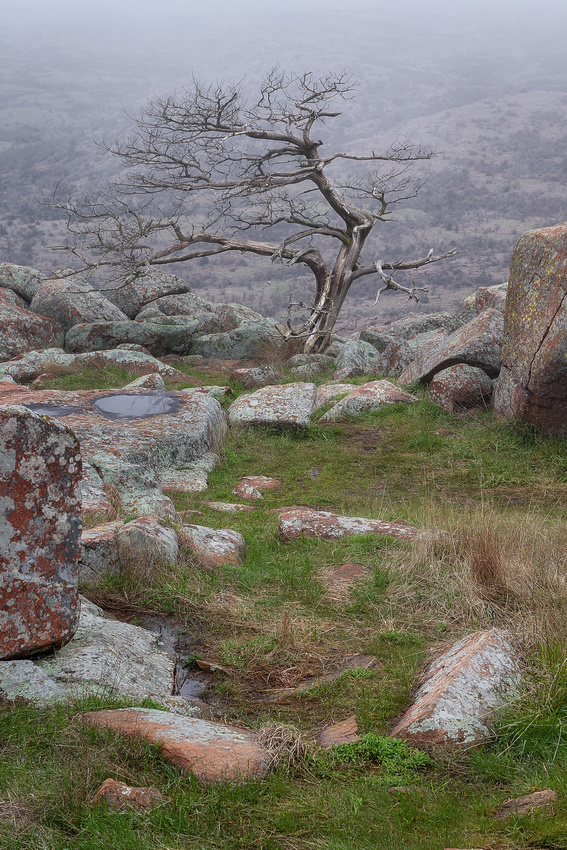 Behind the tree fog began to clear and I could make out the peaks of Quetone Point, Hunting Horse Hill, Lawtonka Peak, and Mt Sheridan. This was going to be a tricky image to shoot. It only works with fog and you must have the right amount. If you don’t get enough fog the tree becomes lost in the background. If you get too much fog you don’t see the depth nor height of the location. So, I sat on a rock with my camera poised as I waited for the right amount of fog to return. Finally, I had ideal conditions and I shot off a series of exposures before the fog fully dissipated. I was really pleased with the composition of the image. I like how the white stones lead the eye to the tree and contrast nicely with the green grasses. You can make out some of the detail in the background, but its just the right amount of hazy. The tree branches don’t get lost in the background. Below I’ve attached some rejects images to show you the difference the right conditions can make. 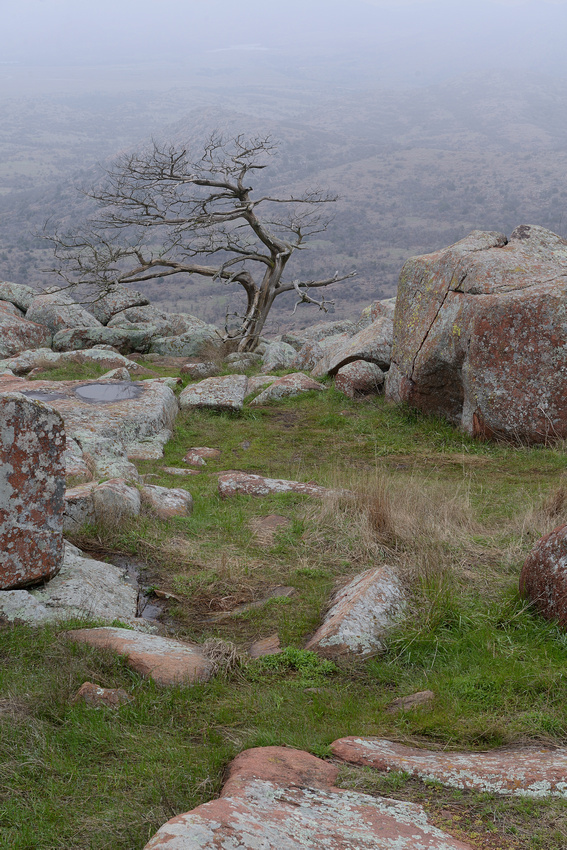 There is not enough fog in this image and the tree branches get lost in the background. 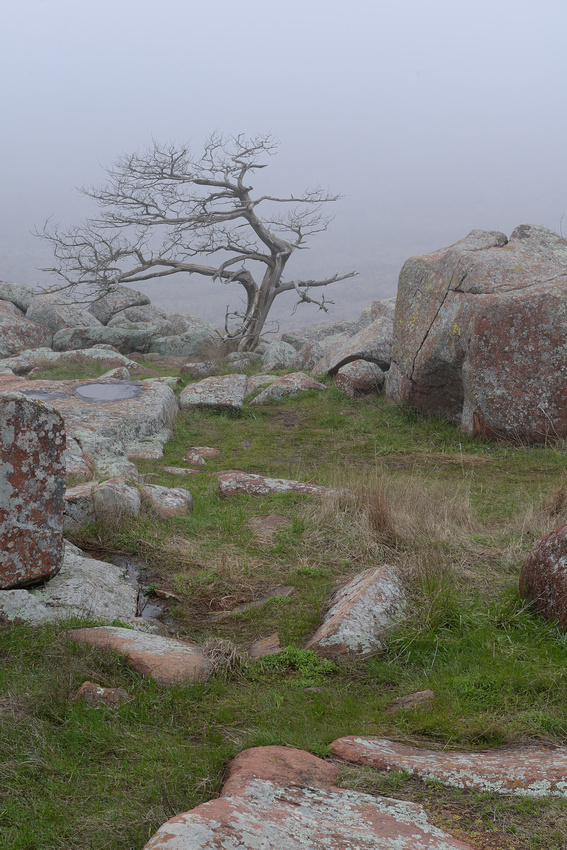 This photo has too much fog and you can't see the height and depth of the scene.