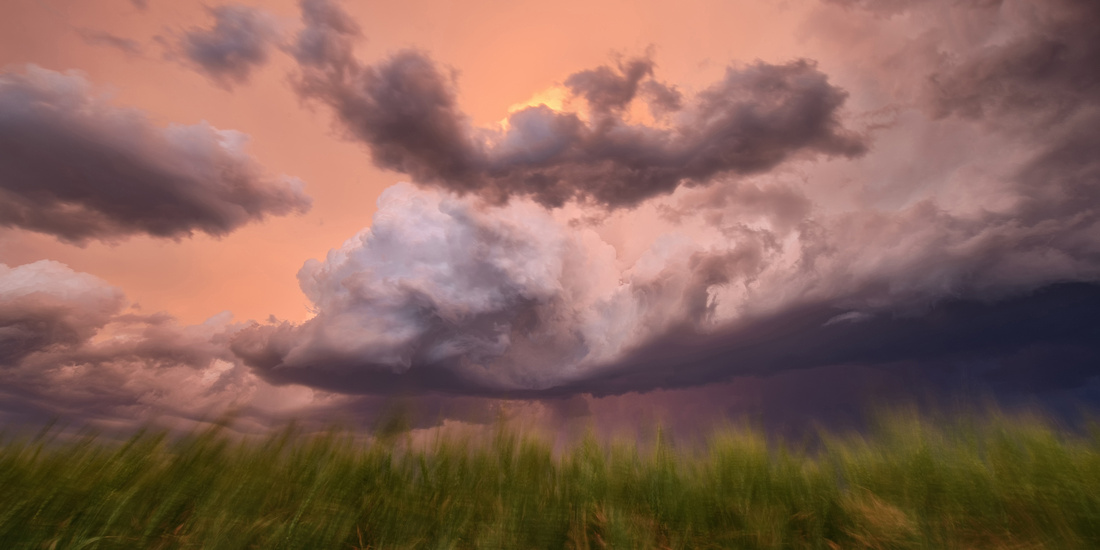 Several years ago, I was driving down some country roads in Iowa Park. I had my drivers license and a car that allowed to extend my reach of photogenic locations. One of these locations was on some ranchland just off the main road. A lone mesquite tree stood right next to a barbed wire fence. The tree was quite interesting in shape and was completely barren all year around. This dead mesquite tree served as an excellent subject for some of my early “landscape” photography.

On one particular day, storms had moved through our area into the sunset hour. The light hit in such a way that it illuminated a cluster of mammatus clouds off to my east and new towers blowing up to my south. The top of one of the updrafts blocked light from reaching the other storms and created a nearly straight line of dark shadow separating the two storms. Directly below this shadow was my favorite dead mesquite tree. The light was exquisite, the composition was working, and the scene was magnificent. But there was something missing from that photograph, something that would tie the whole thing together and really connect the viewer to the scene.

A cold front was blasting through the area and it howled as it blew through the open prairie like some ancient monster shrieking out in the evening. While this photograph could show everything else, it couldn’t convey the sound—The Howling Winds. The only way I could do that was to title the image “The Howling Winds”. I have tried with almost all my photographs to try to reach more than just the visual senses. Sure, that is an important aspect of photography, but if the photo can make you feel more immersed in the scene, I believe that’s where the power is.

For example, go look through some of my other photographs on this website and really study them. Did you hear it? Did you feel it? Did you smell it? Taste it? Maybe you heard the trickling of a small creek, or felt the sun-scorched sand beneath your feet or smelled the ozone and rain while looking at a storm image? Doesn’t that make the photo more powerful?

A few days ago, I chased some storms with my lovely and beautiful girlfriend Ashlee and my good friend and roommate Jaden in southern, OK. Nothing particularly special about these storms, but we intercepted a mediocre severe warned storm out in the middle of some Oklahoma farmland. And as the last rays of light set below the horizon our scene exploded into a canvas of insane colors and wild shapes! I set up my camera with my ultra-wide angle lens and positioned it against the wheat field. This eliminated the horizon, so you don’t really have anything to ground you in the photo. Now I shot a 1.6sec exposure to capture details in the clouds, but also blur the foreground. Needless to say the wind was really ripping that evening. This is not like my typical storm image, but I believe it is one of the more emotional storm images I’ve captured. Can’t you just hear the rustling of the wheat or smell the rain in those nearby storms? Take it all in and immerse yourself in “The Howling Winds #2”.