Lightning has always been important for my photography. It is the subject that got me into severe weather and storm chasing. While I do enjoy a good lightning display, I find that I don’t see too many good photographs from them. When I first started shooting lightning, any time I caught a bolt it was a good photograph. As time went on, I improved my technical skills to a point where capturing lightning became second nature to me—now I could be artistic.

One those rare occasions when these three factors coalesce something spectacular happens. That was the case for this week’s Pic of the Week on a local storm chase I made with my wonderful and gorgeous girlfriend, Ashlee. After intercepting a tornado-warned storm just outside of Burkburnett, the sun began to set and we repositioned to the south of town to watch the approaching weather. Sunset/blue hour are my favorite times to shoot lightning. The ambient light is strong enough to bring out foreground detail, but it is also dark enough to allow for longer exposures.

While driving back north we started to see new storm cells going up to our northwest. The storm tops outlined with the soft pink light of post-sunset and the towers climbed into a stunning azure sky. We turned west on FM 2224 heading towards holiday for a closer look. Along the way, we came across a stock pond that reached to the edge of the road. This would be an awesome location for some lighting! Shortly after we pulled over, lightning started to erupt from the developing storms. Bright magenta flashes of hot plasma burst from the clouds and struck the earth, sending shockwaves reverberating through the open field. The freshly filled stock pond reflected the strike and I jumped in excitement for the potential photo.

I quickly and intentionally set up my gear and locked in a composition. It was going to be pretty straight forward, I made sure to include the curvature of the pond which added another layer of depth to the scene. Now it was time to wait for the lightning. Waiting is the longest part. But lightning did come, and in great fashion, as bolt after bolt blasted from the storm landing directly in my composition. It was my favorite time to shoot lightning, we had amazing light, I had an excellent foreground with great reflections, and the lightning was heavily branching and forking as it searched out its opposing charge. This shoot literally checked all the boxes for what I now deem a good lightning photo. Once again…the standard has been raised. 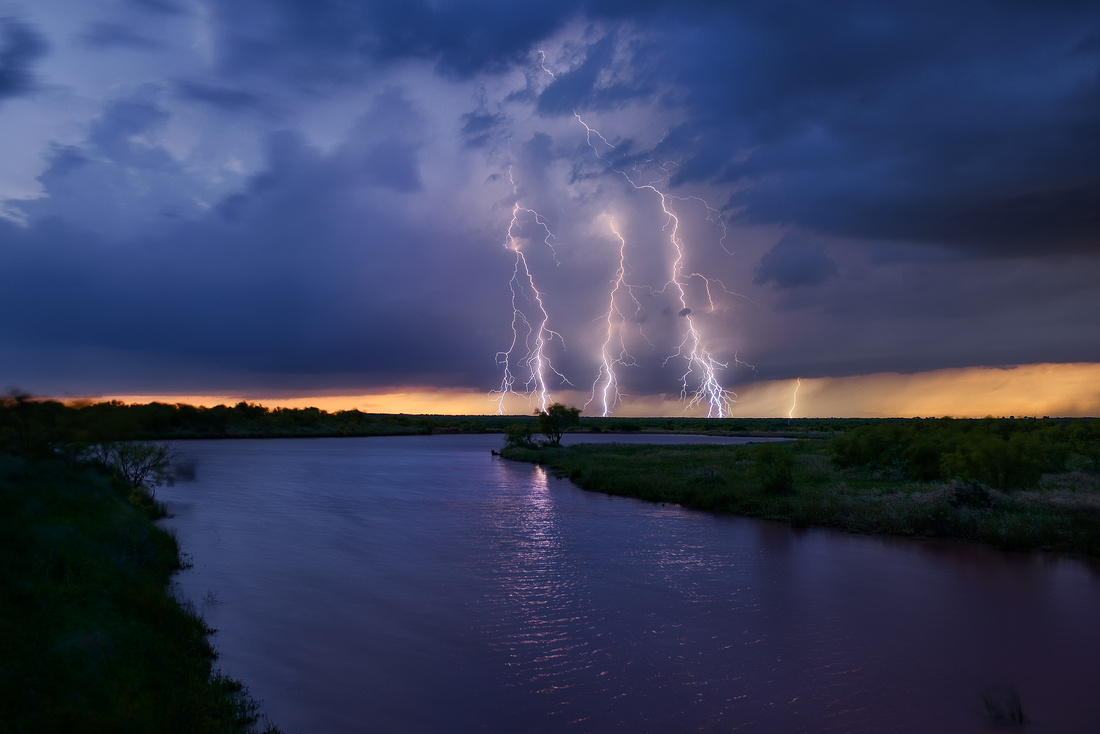 Lightning 5/22/20Late evening lightning from a severe warned storm outside of Holiday, TX.