*Continuing from our western Oklahoma adventure*

Jaden and I woke from our little hours of sleep. All night the wind kept pounding the tent with only a few brief moments of peace. On the plus side, we did get to see the milky way last night and went to bed happy with our results. Now we were getting gear together for a sunrise shoot on Sunset Beach. We had some time to kill before our meetup with a local. We spent the morning digging our tripods legs in the sandy shores of Foss Lake. It was much different from yesterday with all the tourists and beach visitors, now we were sharing the beach with one fisherman and a few birds. Although the sunrise was not as expected, we still came back with some good photos. Our time was up on the beach and we were now leaving Foss State Park to meet with a friend in Cordell, OK.

Sadly, I never heard from my friend and our plans to hike a certain area fell through. I was a little upset, but luckily, I had a backup plan. We were pretty close to a location I have always wanted to visit, Roman Nose State Park. Just a little under an hour’s drive, I thought we could make in time to beat the Sunday afternoon crowds. Leaving Foss State Park, we made a small detour along the side of the road to photograph some interesting canyons and rock formations before heading to Roman Nose. The drive up there was pretty normal, a few rolling hills but mostly flat open farmland. That is, until we reached the Canadian River. Very quickly the open pastures collapsed into a wide chasm as the Canadian River snaked its way through the bottomlands. The vegetation changed here too, instead of tall grass and short grass we were seeing more riparian species. Huge Cottonwood Trees lined the banks of the river dwarfing the scrub oak, post oak, and red Cedar. It was such a dramatic change, almost like we were in a completely different part of the state.

Crossing the Canadian, we were just getting a taste of the type of landscape we were driving towards. Roman Nose State Park is one of the original 7 state parks in Oklahoma and is named after a Cheyenne Indian chief—Henry Roman Nose. After the Red River Wars Mr. Nose was allotted some land in Blaine county, OK. A land with steep gypsum canyons and three flowing springs. Mr. Nose lived here from 1892 until his passing in 1917. In 1937 as part of the New Deal the state park was created by the help of the CCC. Driving around Roman Nose State Park you can still see the original stone bridges, picnic areas, and structures made by the CCC.

When we made it to Roman Nose we stopped at the main lodge for maps and trail information. Most of the lodge was empty or closed, likely because of the coronavirus. But after checking in and getting some information we were off to springs. Roman Nose in interesting in that a lot of the park is developed. In fact, they have an 18 hole golf course on their grounds, but there are some many areas that remain completely untouched. You might find yourself in say, a well-developed picnic area but just meander down the trail and soon the surrounding forest swallows you up and all you can hear is the wind in the tress and the gentle splashing of the springs. We arrived at our trailhead and began the short hike to the springs. The sun was out now, and it was starting to heat up a little, soon the masses would be swarming this area to dip, swim, and splash in the springs.

Not long after reaching the springs, I came across this scene. Here I was up on the bank several feet above the spring looking almost eye-level with the multi-tiered waterfalls. The trunks of old cedar trees extended from the ground exiting the frame. How tall are they? Who knows, you cannot tell in this photo. The spring had a bluish-aqua tone to the water which contrasted nicely against the brownish-red rock. The soft early morning light backlit the woods creating a diffuse glow on the idyllic scene. For a moment, it was so peaceful and relaxing I forgot I was photographing and enjoyed the tranquility. I snapped a few frames before hearing the guffaw of some teenagers jumping from rock to rock as they made their way down to my shot. They decided to stick around, and we decided to leave and head on over to the Big Spring. But more on that next week… 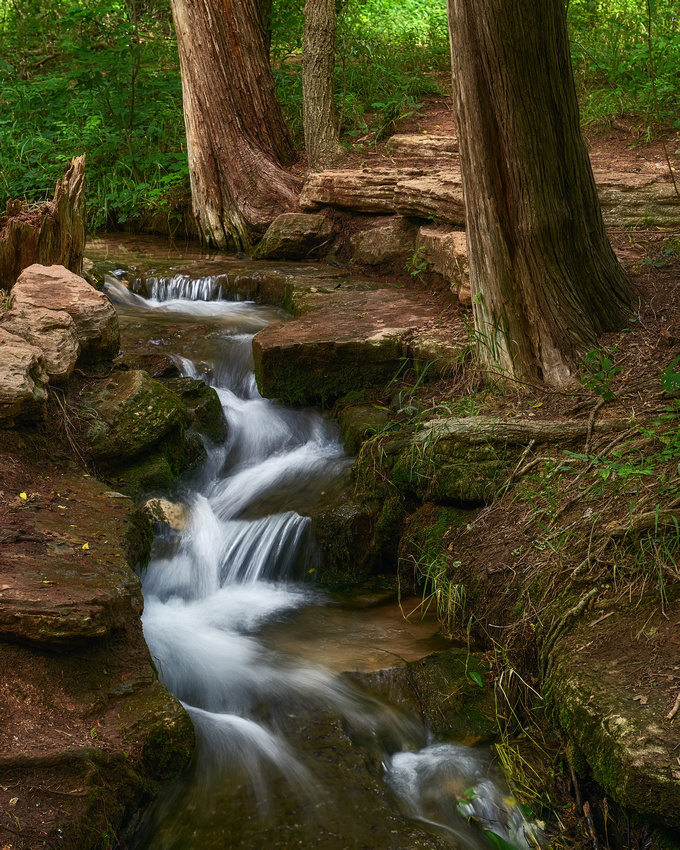