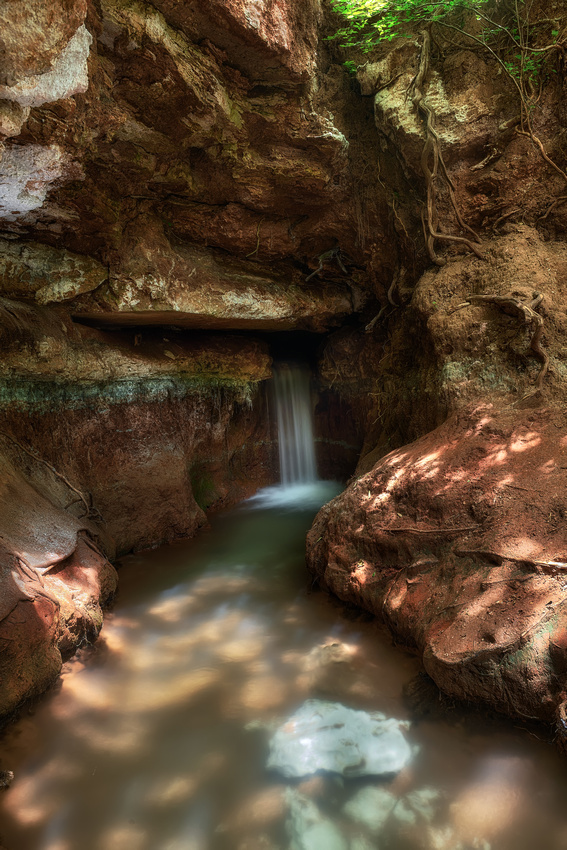 “Looks like we’re gonna get our feet wet!” I shouted to Jaden as I plunged my foot into the cool waters of the creek. Jaden was smart and decided to take the high road avoiding the water. I must admit, the initial shock of the cold green water had me contemplating the high trail as well, but I pressed on following the creek upstream with the water reaching halfway up my shins. We were on the hunt for the source of the flowing water. I had seen pictures, videos, and people’s opinions of this target, but photos, videos and words are not match for grand experience. We were making our way to the Big Spring, Jaden up on the banks and me in the water.

The hike…er walk…er wade—Wade! That’s a more accurate description—was short and I reached the creek dam. Here I came to a pool of pristine emerald water. The sunlight gleamed in the water making it sparkle like diamonds. I could hear the “RRRRRSSSSSSSHHHHHHHH” of the nearby waterfall, but I couldn’t see it. Looking up the creek the gypsum walls narrowed into a steep slot-like cut through the dirt as it wound around the creek and into the mysterious cave. Here, I decided to get out of the water and start climbing up to a higher vantage point.

Almost immediately getting out of the water, I started hiking up along the wall. Dirt crumbled beneath me with every step showing the effects of soil erosion. Trees with skeletal roots stretched down the walls. At one point, I’m sure they were deriving nutrients from the soil, but were now exposed to the sun, wind, and other elements causing them to dry and weather. I pressed on gaining a higher perspective. Now I could actually see the waterfall. Big Spring is not an impressive waterfall, maybe only 8ft tall, but it is no less photogenic. The spring has carved a significant cavity into the underlying alabaster and gypsum rock.  Not the strongest or safest rock that’s for sure.

I exposed a few images before climbing back down closer to the creek and more eye-level with the waterfall. Again, I took my time watching my footing, and carefully reaching my desired location. Now, I had to set up my tripod in such an awkward position that I had lean back against the dirt wall to stabilize myself and keep from falling in the creek. I had a nice view of the waterfall as it poured out gallons of aqua-blue water from the brown-reddish rock. Tree roots dangled over the alcove like the tentacles of a monster guarding the cave. From here it looked like the cave goes back a far way. I could maybe see 20ft past the waterfall before it turned into blackness devoid of any signs of light. How far back does it go? There was no telling.

I shot several different images of the spring. I shot panoramas, wide, tight, vertical, horizontal all sorts of images. But due to the light I wasn’t very happy with my photos. I don’t really care for the light in this image, but I thought that it needed to be documented and I was going to work with that I was given. I will likely return in the fall and shoot a much better photograph. Regardless, this is what I came back with and there is an unexpected beauty to the area. This wraps up my western Oklahoma adventure blog posts and I have been so busy with comet NEOWISE that I haven’t had time to edit anything else. Those photos will be coming later on this month!