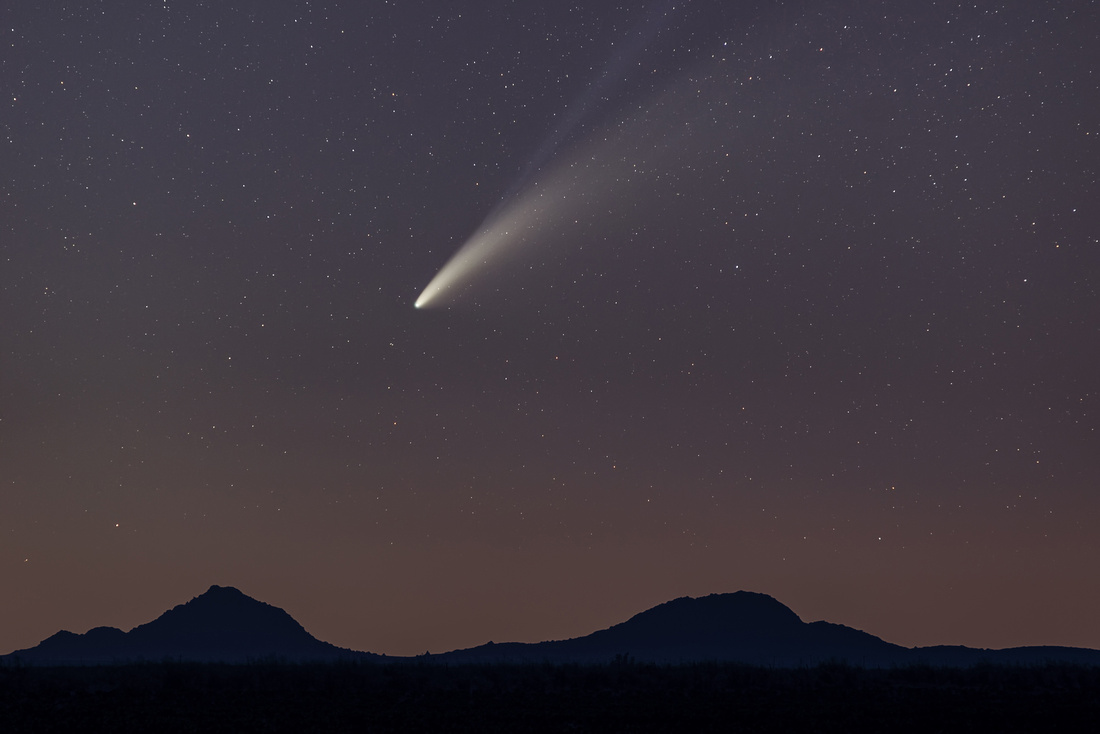 I am sure you have heard about comet C/2020 F3 (aka NEOWISE) and you may have even glanced out during the early morning or early evening searching for the celestial wonder. Maybe you have gotten to see it, maybe you live in the southern hemisphere and can only observe vicariously through photographers in the northern latitudes. But one thing I can assure you, it is here, and it is beautiful! Ever since I first heard about the comet, I was adamant about finding an interesting location to photograph it. After doing some research and consulting Google Earth I came to discover the comet would appear in the northwestern skies after sunset. Eventually the comet would move closer to the horizon after dark. If I timed it right, I believed I could get a photo of the comet above the summits of Twin Mountains. Last week I made the 1.5hr drive with my lovely girlfriend Ashlee and my roommate Jaden.

Our photography trio left Wichita Falls shortly after I got off work. Our goal was to arrive on location by 9:00pm. We made the drive across the Red River and into Oklahoma. It was quite windy and there was thick haze off in the western horizon. Vast open farmland encompassed us with zero clouds in the sky. One feels very small under such a big sky. Soon the terrain transitioned to rolling hills with craggy bumps of granite—the Glen Mountains of the Wichita Mountain chain started coming into view. We entered Mountain Park, a small community nestled on the foothills of the mountains and after finding our route we began driving towards our location. Typical to this area of Oklahoma, this road was windy and had sharp 90 degree turns circumventing and skirting open farmland. The road itself was also typical—barely drivable—deep potholes, gravel then dirt, then pavement, then gravel, then more potholes. But we eventually arrived at our location.

To our northwest we could see the Twin Mountains rising from the flat fields, they were approximately 2.5 miles away. Closer to us was a field of some type of crop. I think it was soybean, but I don’t have enough knowledge to confirm.  I wasn’t too concerned with the crop, as my composition was going to be tight and not really have a foreground. After some scouting and checking my compass, I was able to set up for my shot. Ashlee and Jaden set up their angles as well and we waited for the sun to set and the comet to appear. It took some time, but NEOWISE finally made an appearance high above in the northwestern horizon. This was nowhere close to my composition, but I hoped I got my alignment right. Just a little after 10pm NEOWISE showed up in my composition and I started to make some exposures. I wouldn’t have a lot of time to get the shot. But thankfully, I was prepared and started snapping off some shots.

I chose the 135mm focal length because it would make the comet the largest and still incorporate both of the mountains in the shot (after all they are called the “Twin Mountains” so both were needed in the composition).  I was using my iOptron Skytracker to get more detail out of the comet and maybe even capture the ion tail. I first shot 9 images with the tracker at 30seconds each. This gave me an excellent RAW image to use for stacking and blending. After I was satisfied with my comet exposures, I turned the tracker off and reshot my original composition with 9 untracked images at 30 seconds. This way everything would blend in seamlessly. We stood there in awe of NEOWISE and counting stray meteors that streaked across the night sky. Behind us, the galactic core of the milky way rose above our heads. Stars shimmered, coyotes called, crickets chirped, and cameras clicked. It was such a wonderful, peaceful night. We all came back with some great images and some even better memories.

After NEOWISE sank behind the atmospheric haze, we drove around to the other side of the mountains to photograph the milky way between the Twin Peaks. Our long night of shooting had come to end, and we made our way back to Wichita Falls later that night. Compiling this image proved to be a challenge, but most astro-landscape photography is not simple. First, I stacked the 9 tracked images I made of the comet. The stacking process helps reduce noise/grain and reveals more finer details of the comet. Next, I stacked the 9 untracked images of the foreground. This was again, to reduce noise/grain but this time for the foreground. After that, I had to combine both of these stacks in an accurate and pleasing way, I spent a few days trying to get it just right so the alignment and position were as accurate as possible. This image used up a lot more time than my usual work, but the final result shows it was well worth it! I have several more NEOWISE images that will be coming next week.

If you haven’t been out to see the comet, it has reached its peak and will begin to dim over next week. I highly suggest you get out of the city, bring some binoculars, and go experience this amazing comet before it disappears. Sadly, NEOWISE won’t be seen from earth until the year 8786!!! So, you better get out while you still can.