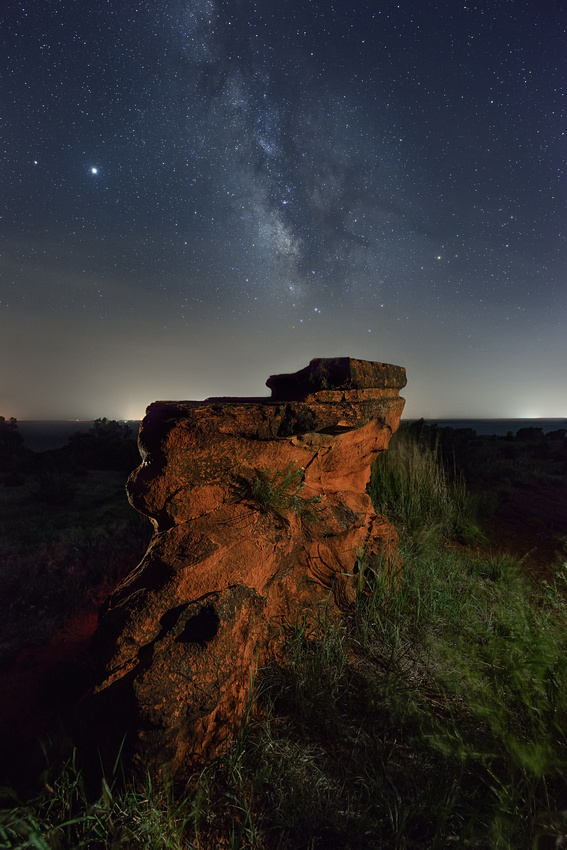 Milky Way Over Foss LakeQuiet night on the Foss Reservoir and Foss State Park in Oklahoma.

Oh, how long it has been since I’ve been camping? Since I’ve woken up to the cry of coyotes, slept uncomfortably for a few hours, braved the fluctuating temperatures with nothing more than a few aluminum poles and safeguard of nylon? Actually…not that long, Ashlee and I camped at Lake Mackenzie just a few months ago. Regardless, it was time to get away from city stressors and return to nature.  The original plan was to camp Saturday night and wake up early Sunday morning. I had contacted someone who had access to private land near the area. Long story short, that didn’t work out, but we made the best of it and still had a great time. My roommate Jaden got to join me on this trip. Ashlee, unfortunately, was too busy in school.

We left Wichita Falls much later than I had originally anticipated, this is typical of how most of my trips start out. After a couple of hours on the road we reached the entrance to Foss State Park. I did not know much about this park, but there seemed to be a lot of area that needed exploration. Because we arrived later than normal, we didn’t have much time to scout out all the areas of the lake. I guess that just means I have to return at another time.

Our first stop was to check out our campsite. I had reserved site OL005 which was up on a hill overlooking the lake. Since there was very little information on this site, I didn’t know what to expect. I did know that a higher elevation overlooking the lake could make for better astro-landscape images later that night. We arrived at our campsite and were greeted with a blustering wind whipping over the hills. We inspected the site for a minute before exploring the nearby cliffs. Not fifty feet from our camp we found a peculiar rock jutting up from the surface. This miniature sandstone pillar had a unique shape and appeared to line up in the path of the milky way. I thought I could take advantage of the interesting angles and use it as a good foreground for an astro-landscape photograph. I climbed up the rock to get a better view.

A dark brown haze was looming over the horizons. The Saharan dust had made its way into northwestern Oklahoma. Hopefully, this would not cause problems for my proposed night shoot. We explored a few more areas before returning to camp. I was happy with my subject and my composition, but it was much too early for night photography. We instead, drove down to Sunset Beach to photograph the lake and the palapas that were along the shore. I was convinced, if the conditions were right, I could make this beach look like a tropical paradise. We stayed past sunset watching beachgoers and families swim in the lake, while we jumped from palapa to palapa making photographs. Those photos will be shared another time.

After sunset, I was famished from the long drive and the hot and humid weather, so we went back to camp, set up the tent, and then drove to the Copperas Cove Marina to grab some dinner. Our bellies full, we returned to camp and began preparing for the night shoot. Now the sun had set, blue hour had passed, and we were in the full darkness of night. But a half moon was sinking in the western horizon behind a dense layer of clouds, dust, and haze. This did not look so good for milky way photography. Jaden pulled up the IR satellite and we could see a thunderstorm’s anvil in the Texas panhandle was spreading over our sky. From time to time thin breaks in the clouds would reveal shimmering stars through the murky haze. To help pass the time, I decided to photograph my foreground first. I set my camera up to self-timer and ran between the scene with my cell phone trying different light painting angles. That ate up some time, but the clouds and haze were still prominent. I decided to go back to the tent and rest for a while, I would come back out after 30 minutes.

Sometime around 1:00am, we finally had clear enough skies overhead to see the milky way! I rushed down to my scene making sure not to bump my camera and shift my composition. For this image to work I needed the camera to remain as still as possible. I started shooting off some exposures and realized I had left the stabilizer on my lens on the entire time! I was worried that everything I had shot before was ruined and unusable. Thankfully, there were several images that were sharp and could be used in the final image. I spent the next hour taking advantage of the clear skies above and watching planes, satellites, and meteors move across the starry night sky. Saharan dust was still hanging around and the wind had not died down. But in the middle of the gloomy dirt, the milky way shone through bright and clear. I waited for the milky way to move in position over my rock and satisfied with the shoot, returned to the tent for some much needed rest. This final image is made of 11 photos total. There are two for the light painting on the foreground and nine for the milky way stacked to reduce noise (grain) in the photo. I have plenty more images to share from this trip and next week we will be exploring a place I have wanted to visit for a long time—Roman Nose State Park.