Well fall is officially here and that means cooler weather, leaves changing colors, and pumpkin spice whatevers as far as the eye can see. It also brings the start of my hiking season and I have several locations I am excited to explore this season. But most notably would be the leaves changing on the trees. Now down here in Texas, our leaves don’t start changing until the first week of November, but in the high mountains of Colorado, Wyoming, and New Mexico autumn is already in full swing. I saw some reports of the changing Aspen trees in New Mexico and It reminded me of one of my past fall photo adventures.

My good friend Ian Glasgow and Jaden Corbin rode with me to the mountainous regions of Colorado. We spent four days camping, hiking, and driving around the Blanco, Salida, and Colorado Springs areas. On our third day there, we left our camp at Lathrop state park, said goodbye to the Spanish Peaks and headed north to Salida. Towering mountain peaks surrounded the highway as we drove through the basin. Several 13kft peaks came into view, their fresh snow shimmering in the late morning sun. We stopped in Mears Junction for a quick bite to eat and admired the landscape around us.

After lunch, we drove north to Poncha Springs and turned west on Highway 50 to take us to Monarch Pass. I had heard of this location before and wanted to check it out. By the time we reached Monarch we had gained over 2000 feet in elevation and some of the Aspens in the higher elevations were gleaming with bright yellow and orange tones--a simple precursor to what we were about to see. The road wound its way through the canyon following the South Arkansas River and we came to a curve. As we curved around the road the bald face of Monarch Ridge North peered into view and all along the mountain side vibrant yellow aspen trees covered the sweeping hills. We stopped at a small pull off to admire the view and capture a few images. The color contrast on this scene was so wonderful. We had the dark evergreen trees speckled with the brilliant gold aspen underneath a wonderful clear blue sky. 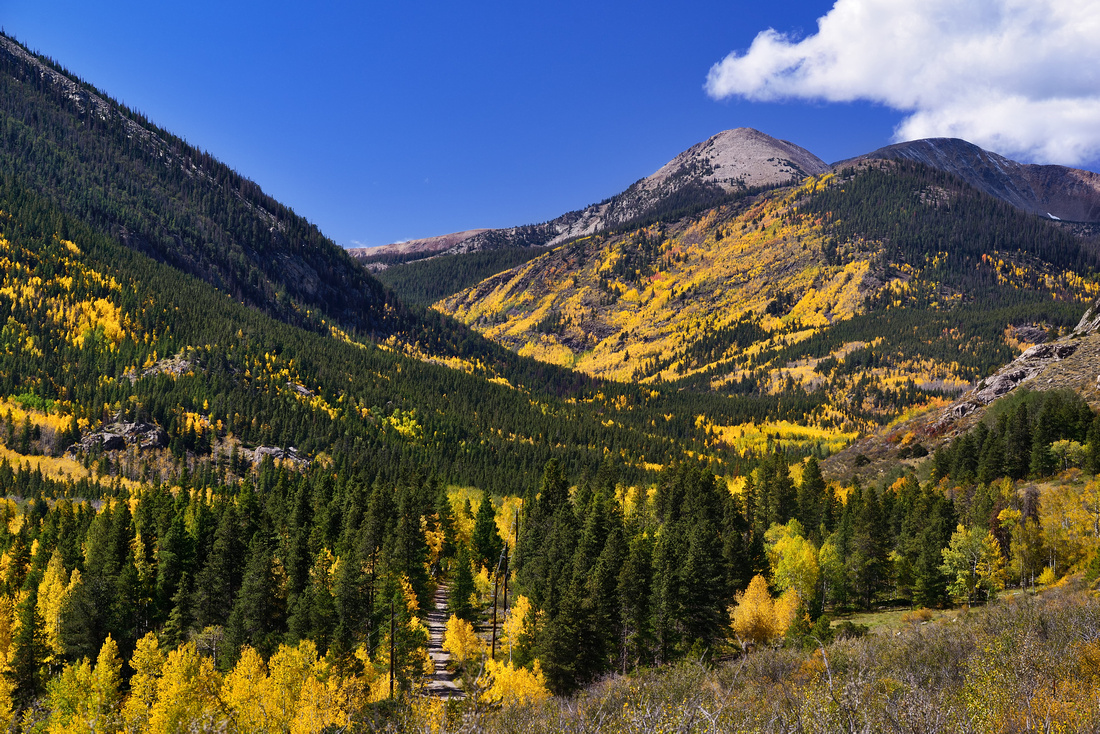 We continued down the road passing through the small town of Monarch and stopping to check out the Monarch mine/quarry. Eventually, we made it to our destination at 11,322ft Monarch Pass. The air up here was thinner, and it took a while to acclimate, but we were greeted with a spectacular panoramic view of the surrounding mountains which made it all worth it.