When it comes to good landscape photography, persistence is key. Repeatedly coming back to the same subject under different conditions will give you a greater chance of capturing that subject at its absolute best. There’s also something comforting about having a familiar location or subject to photograph. All your expectations and preconceived notions have already been tested. So, you kind of know what’s coming. Once you’re more comfortable with your subject it becomes easier to seek out more creative compositions or explore other areas your subject is in. Take for example, this shot of Little Niagara falls in the Chickasaw National Recreation Area. I have photographed this waterfall several times before and each time I try to capture a different angle or perspective. Now, I have been here many times in the past, but this was Ashlee’s first time visiting and she told me she wanted to capture “moving water”. I couldn’t imagine a better candidate than Little Niagara Falls. 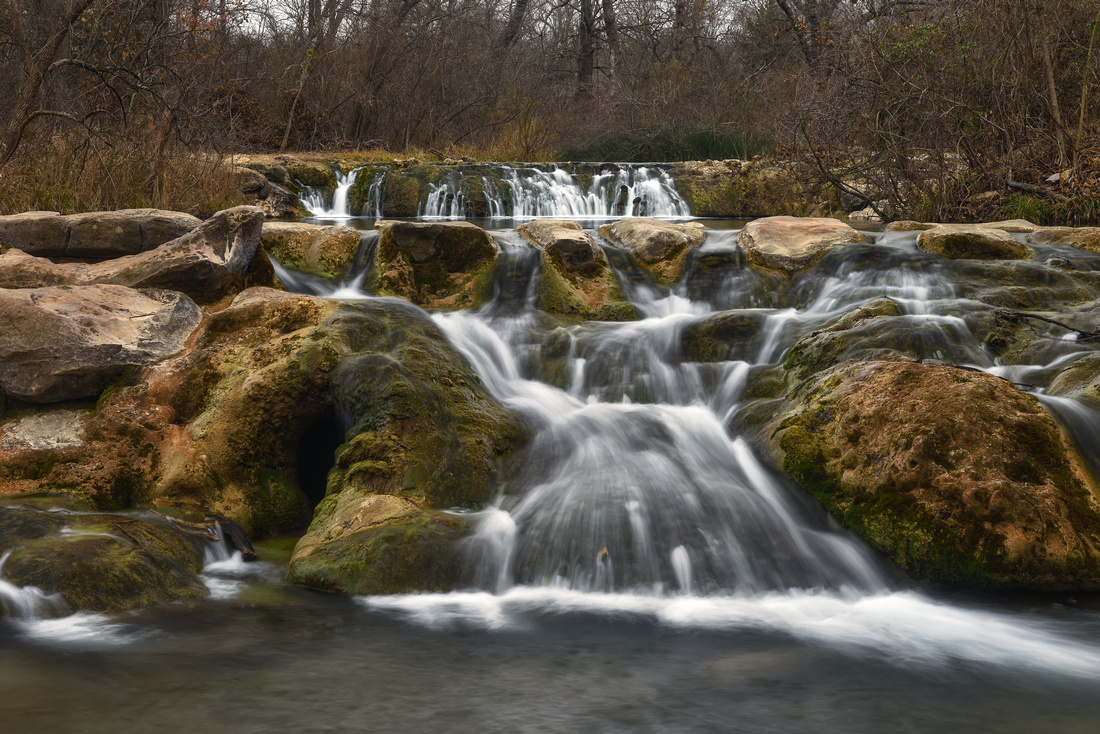 Little NiagaraNatural spring water cascades down the upper and lower section of Little Niagara in the Chickasaw National Recreation Area.

Early Sunday morning we were once again, loading up the SUV with our gear getting ready for another photo adventure. Though there was a chance for icy and wintry precipitation in our area, we opted to make a drive further away from the snow in the Arbuckle Mountains of southern Oklahoma. This was Ashlee’s last free day before her final semester of school started and I didn’t want to waste it on a slight chance of snow. As we left Burkburnett and crossed the Red River it became apparent that we were not going to see any sunlight today. That was ok though, overcast skies can work much better when photographing waterfalls. We arrived at Chickasaw National Recreation Area around 11am and we pulled into the Little Niagara parking area. During the spring/summer time this parking lot of full of swimmers looking to enjoy the cool water. This was not the case today, however. Only one vehicle was in the parking lot when we arrived. These are the kind of conditions I hope for.

Ashlee and I gathered our gear and I explained to her the trail system. She went downstream and I went upstream. I was going to photograph the upper falls and work my way down towards the lower section. I spent a short while exploring the upper falls and snapping multiple images. Some wide, some tight, some even more abstract. Eventually, I moseyed my way down to the lower section of the falls. As you descend the lower section, the upper falls becomes covered up. The higher up you go, the more separation between the two waterfalls. Even standing with my tripod fully extended, its hard to capture a clean view of both waterfalls. I need to be higher. Maybe just two feet higher would work. I noticed a small travertine boulder and thought that could work. I hopped up on the boulder and watched as the upper falls emerged from behind the rocks. I had found my composition.

Surprisingly, the boulder was stable enough for me to place myself and my tripod on it and capture a series of different exposures of the falls. This boulder was not there the previous times I was at Chickasaw and it would be nearly impossible to capture this image without it. It was quite the treat watching the beautiful waterfall cascade down the travertine. Nothing could be heard but the rushing waters and the cheep of nearby Yellow-Rump Warblers darting between the trees. I have more photos from this trip that I am preparing so be on the lookout for those in the coming weeks.