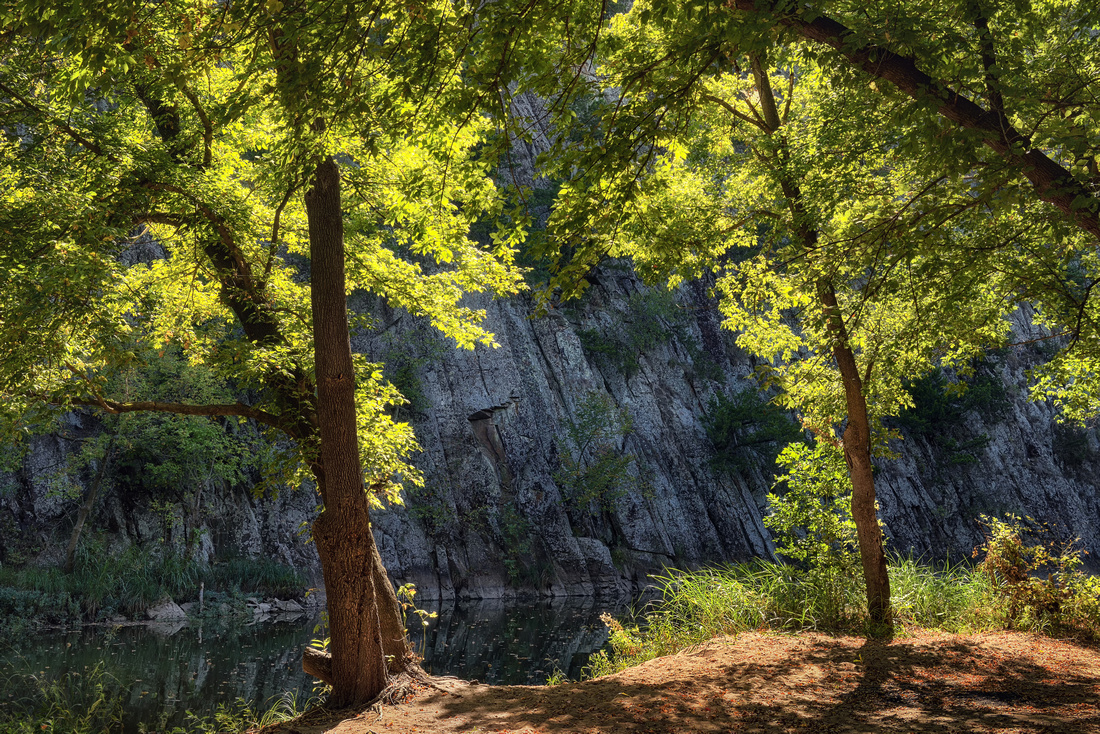 Continuing from our last photo adventure, Ashlee and I went off to hike the Burma Road Trail in the Wichita Mountains. This trail would be simple enough, but still have some elevation changes. It was the perfect trail to test our abilities post-COVID. We really enjoyed hiking beneath the shade of the post oak forest and walking next to huge boulders along the north side of Quanah Mountain. Ashlee was able to photograph a wide variety of subjects and you can check them out here on her Instagram. https://www.instagram.com/anmaddenphotography/

We finished our hike and clocked just a little over four miles, which we were quite excited about. On the way back we stopped at a newer local restaurant to grab some lunch. We enjoyed some tacos before starting towards home. Ashlee and I had a great time on this hike and truth-be-told we didn’t want to go back home. I thought about where we could go and one place that I have always wanted to visit came to mind—The Medicine Bluffs. For one mile along the banks of Medicine Creek four contiguous bluffs tower over the water and riparian woodland below. These uplifted walls of rhyolite have always intrigued me. There is only one problem—they sit on the property of Fort Sill.

Access to the Fort (if you’re not military) is limited. Especially during a pandemic. But just for fun we decided to give it a shot. It was surprising easy. All we had to do was register and we were in! I can’t believe I have waited this long to gain access to such an incredible area. Not only is this land stunning, but its rich in history. Native Americans would come to the bluffs seeking enlightenment from the Great Spirit. Some might even attempt the “Medicine Man’s Walk” (a huge crevasse separating the second and third bluff). Supposedly, it was a famous location for Indian suicides, tales of wayward lovers clasping hands and leaping to their deaths rather than be separated. One legend says that famed Indian Geronimo escaped Fort Sill and with the calvary in pursuit leaped on horseback down a deep vertical cliff never to be seen again. He later died of pneumonia in 1909. Myths and legends aside, it is very easy to see why the Native Americans considered this area sacred ground.

We parked at the Fort Sill Outdoor Fishing/Recreation parking lot and gathered our gear ready to start the hike. It was now late afternoon, and the sun was out in full force, not one cloud in the sky. This would make photography difficult, but we didn’t care. We were just excited to be out here. After leaving our car we walked down the banks of Medicine Creek. The crystal clear water shimmered in the sunlight. Here we had our first view of the bluffs. The eastern most bluff rose 150ft above the creek and was quite impressive. However, we were far more interested in the taller bluffs to the west. After walking around the picnic area, we found the main trail that would lead us to the bluffs. As we hiked along the trail, we began ascending uphill. From here we got our first look at the third and fourth bluff and we just start to make out the infamous Calvary’s Gap (aka Medicine Man’s Walk).

The trail took us westward and we stopped several times enjoying the scenic overlooks and searching out things to photograph. The tall near-vertical walls of the bluffs were in the shadows, small beams of sunlight would hit various rocks and trees revealing contrasty subjects to our cameras. Only the bravest of trees would rest on the cliffs edge their foliage gleaming in the sunlight surrounded by gray volcanic rock. I made the comment to Ashlee “Its like a miniature Yosemite Valley!” The tall vertical cliffs and gray rock reminded me of Half Dome and El Capitan rock formations of Yosemite National Park. Though these cliffs were about 10x shorter and composed of a different rock composition. We kept along the trail and eventually reached the Medicine Bluff Historical Marker. Here is what the marker says:

This unique landmark at the eastern end of the Wichita Mountains was indited, described, and explored by all early expeditions and was held in deep reverence by the Indian tribes of this area from time immemorial. The four contiguous porphyry bluffs form a picturesque crescent a mile in length on the south side of Medicine Creek, a tributary to Cache Creek and the Red River. It is evidently the result of an ancient cataclysm in which half of a rock dome was raised along a crack or fault.

When Fort Sill was established in 1869, the Indians named it “The Soldiers House at Medicine Bluffs”. The site is rich in legend and history.

You are facing the north side of bluff No. 3, which consists of a sheer cliff 310 feet high, rising abruptly from the creek. A rock cairn erected by medicine men on its summit was still standing when Fort Sill was founded. Here the sick were brought to be healed or disposed of by the Great Spirit, young braves fasted in lonely vigils seeking visions of the supernatural, and warriors presented their shields to the rising sun for power. Legends say that this was also a famous place for Indian suicides. The huge fissure between bluffs No. 2 and 3 was known as the “Medicine Man’s WalK”.

A trail leads down from this marker and stops at the creek. I began the short, but steep walk down the old trail. Very quickly the vegetation changes from prairie grass land to hardwood trees. Soon a canopy of various trees envelops you. As I rounded the bend in the trail, I could see the sun backlighting a grove of ash trees, their leaves glowing neon green against the dark rock wall. Instantly, I stopped and pulled out my camera. While this photo does not show the height or scale of the bluffs, I feel is perfectly captures the spirit of this location. I plan to visit the Medicine Bluffs again during the peak fall color in hopes of capturing some really unique scenes.