Since I forgot to publish this post, I thought I would just go ahead and combine the two Baldy Point images and share the story of how I captured them. Next time I’ll be more careful to make sure I actually press the “publish post” button.

Over this past weekend Ashlee and I made a photo trip to the western range of the Wichita Mountains chain. Our goal was to reach Great Plains State Park and catch sunrise over the mountains. Since I have not visited much of this state park before, I wasn’t sure what to expect. I was excited at the idea of exploring new areas, however. We left the apartment early in the morning and made the 1 hour 30 minute drive to Great Plains State Park. GPSP sits on the southern shore of the Tom Steed Reservoir just north of Mountain Park, OK. And while I have been here a few times before, I haven’t spent a whole of time scouting this area. But if I had to describe the 487 acre park in a nutshell, I would say piles of boulders between pockets of prairie encompassed by a lake with a 360 degree view of mountains.

Although we arrived early enough to beat sunrise, we didn’t have much time to find a good composition. In situations like this, I tend to just shoot whatever stands out to me first. Once I get that initial photo out of the way, the pressure is off, and I can start stretching my creativity. I shot the “obvious” sunrise shot with the mountains catching a blissful pink glow, but I didn’t feel it best represented the area I was in. Mountains reflecting in the lake was only a piece of the puzzle, I wanted something that would capture the essence of the park. I knew I needed to capture a photo with some boulders to really bring the whole scene together. I spent the next several minutes boulder-hopping and scrambling to find the most photogenic boulders. It didn’t take long before I found something that caught my attention, but now all that glorious pink light was gone. Looks like I’ll have to settle for golden hour light. 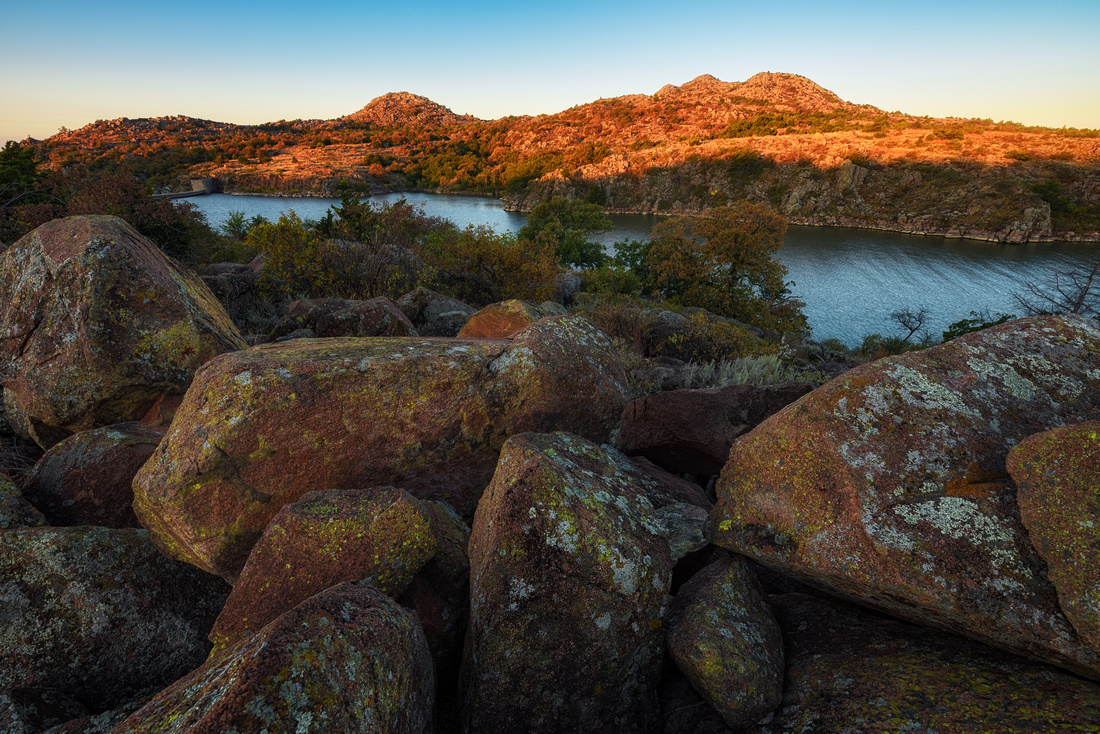 We completed our sunrise shoot and began our hike along the Granite hills trail system. There is very little information out on this park and so I wasn’t sure what to expect along the hike. We spent the next few hours walking up and down the prairie stopping by every once in a while to photograph something that caught our eyes. I did, however, find an excellent composition on one of the mountain summits and I plan to return for another sunrise shoot in the wintertime. With our hike finished, we returned to our vehicle and drove around the rest of the park taking in the 360 view of mountains. From this park you can see the western edge of the Wichita Mountains Wildlife Refuge and the tallest peak of the Wichita Mountains (Mt Haley), the Glen Mountain complex, the Quartz Mountains, and the Mountain Park mountains.

After driving in town and getting some delicious lunch, we decided to drive further west up to the Quartz Mountain State Park and hike the Cedar Valley area in the shadow of Baldy Point. The hike offered us excellent views of Baldy’s eastern face. The Sheer cliffs and “zebra stripe” pattern of the rock are enough to grab anyone’s attention. Though it was quite beautiful, we decided to move to the other side of Baldy in preparation for sunset. Taking the road towards the climbing area, we came across a cotton field primed for harvest. It was here I decided to set up for sunset. The leading lines of the cotton field going out the angular summit of Baldy made for a compelling composition. The wide-angle foreground seemed to make those cotton fields extend forever, but it did shrink the mountains in the background. To alleviate that problem, I shot another exposure (during the peak light) with a longer focal length and combined both images in Photoshop. This let have the best of both worlds and I captured a photo with the cotton fields and an impressive looking Baldy Point. 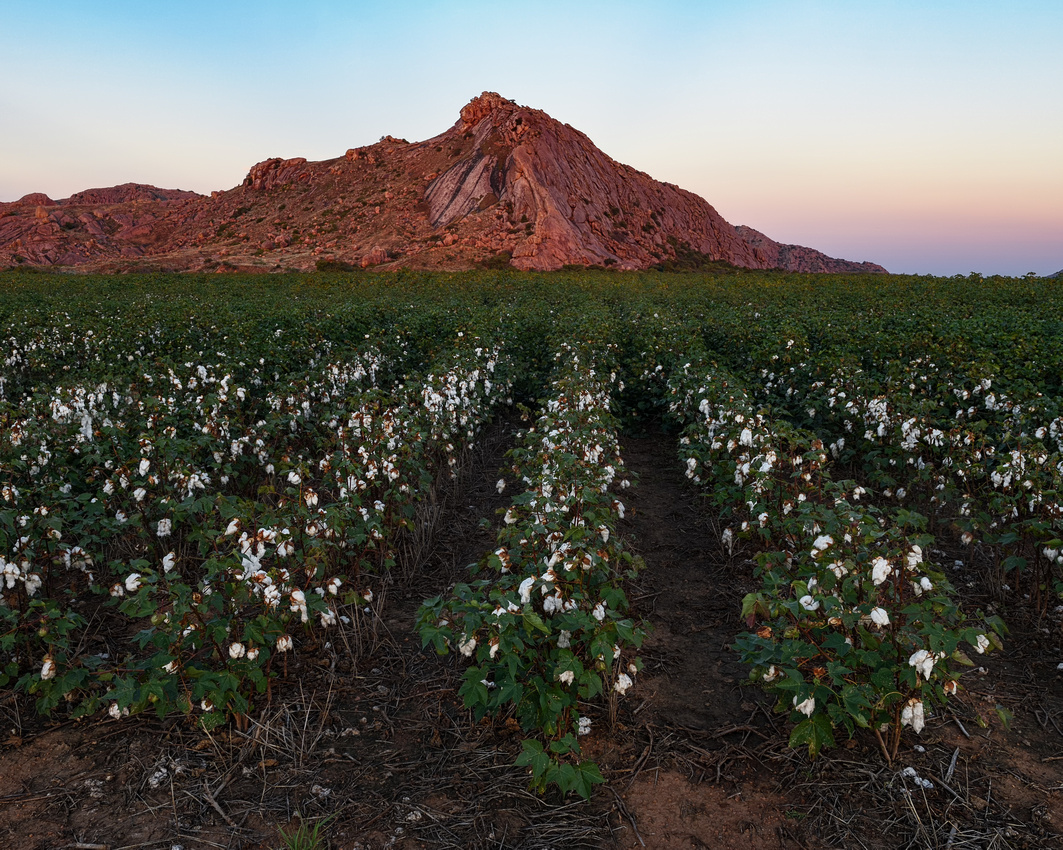 With the best of the light (or so I thought) now behind us, I made my way back to the 4Runner and began packing up my gear. When I turned around to catch one more glimpse of the mountain, anticrepuscular rays came streaking across the sky as the Belt of Venus rose in the eastern horizon. Light pink clouds glided over the mountain tops making the sky that much more interesting. I reached back into my bag and pulled out my camera, but this time I attached my 70-200mm lens and I opted to shoot a high resolution panorama. It took fourteen images to stitch this panorama, but the ending result is over 12 feet in length! Ironically, this was favorite image I captured from the whole trip, but we left Quartz Mountains State Park feeling happy and satisfied.