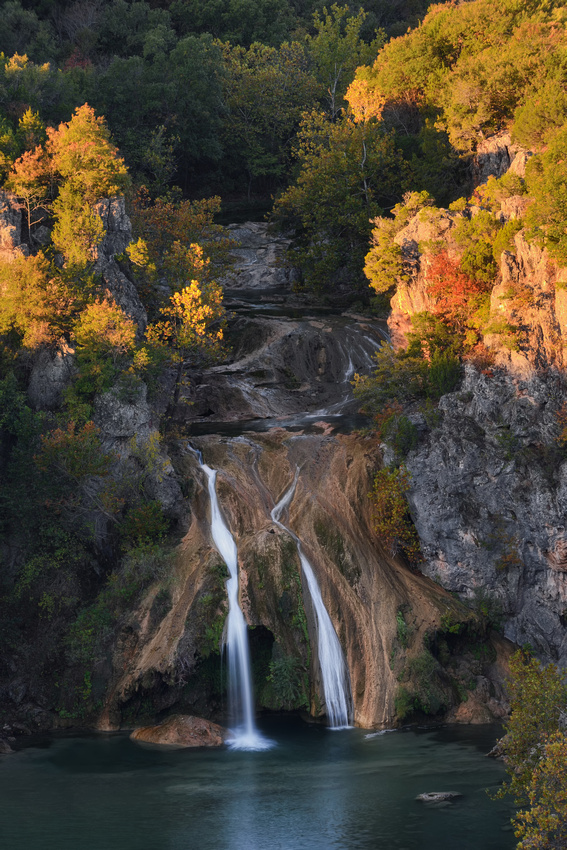 Turner Falls MorningMorning breaks on the cliffs and bluffs surrounding Turner Falls and Honey Creek in the Arbuckle mountains of southern Oklahoma.

It has been a few years since I have photographed Turner Falls successfully. There have been passing encounters and a few shutter clicks here and there, but overall I was just burning pixels. This time, I was responsible for guiding our local photography club out there. The weather was set to be perfect with temperatures nosing into the lower 70s over the weekend. Still, we haven’t seen too much colder weather which means the falls colors were not at peak just yet. Though this didn’t really excite me as much I was excited about exploring new parts of the park and camping in a location I have wanted to visit for years.

I took Saturday off so I could meet up with members of the club early Saturday morning. Since that day was free Ashlee and I decided to go up Friday night to our campsite. We arrived after dark and had just enough energy to assemble the tent and go to sleep. We awoke early the next morning and made the fifteen-minute drive to our meet up location. We would be photographing Turner Falls from the highway 77 scenic overlook. I have shot this location many times before, but it is an excellent introduction to the park and the waterfall. At 7am we were still about an hour away from sunrise. Walking out to the overlook I could hear the faint rumble of the waterfall. “Sounds like the falls has pretty good flow.” I said to Ashlee. The last time I was here my mother and I were greeted to overcast skies and peak fall colors. Now we had completely clear skies and just hints of fall color.

Around 7:20am our party arrived and we began our sunrise shoot. Slowly, pink light began illuminating the hills and mountains to our north and eventually crawled its way into the canyon. The golden light ignited the cliffs in warm sunlight while the creek and waterfall remained in the shadows. This was a stark contrast that I thought would be worth documenting. Using my 70-200mm lens I was able to bring the falls in tight in the frame zooming in around 165mm. I wanted to include the cliffs that were catching the morning glow as this helped give the scene much more depth. There was also just one little tree in prime fall display. Its brilliant red leaves gleamed in the morning sun. You can see it on the right cliff face. We would continue to shoot from this location for another 30 minutes before deciding to descend into the park itself. I have more photos to share from this trip and I look forward to telling those stories in the coming blog posts.