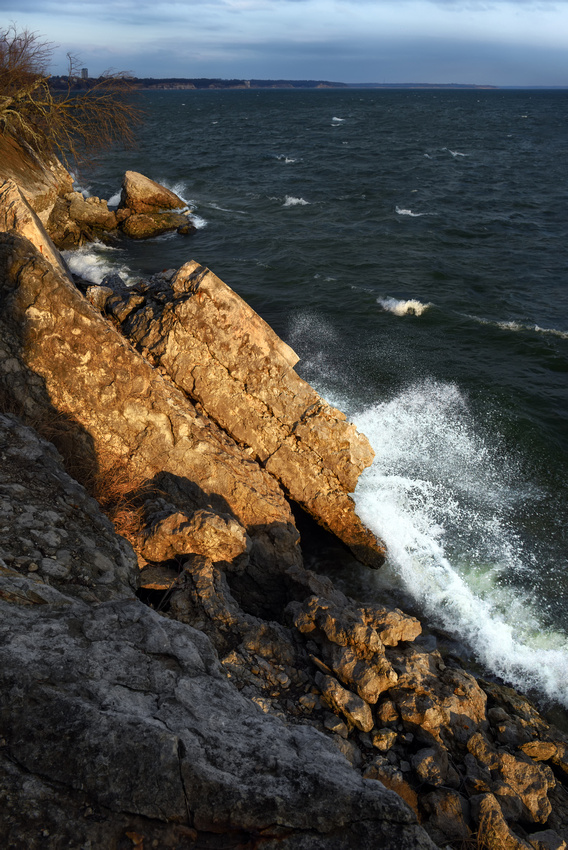 My eyes opened. It was now the morning. We had made it through the night—that windy, windy night. All night the wind was howling outside; screaming is more accurate. Sustained winds around 32mph and gusts as high as 45mph slammed against our campsite all night long jolting us awake in our screened shelter. I was grateful to have reserved this shelter. Tent camping in this wind would have been a nightmare! I rolled over on my side and took a quick look at my watch. The big hand was on the three and the little hand was on the seven. Looks like we overslept. Though it wasn’t all bad, the sunrise looked to be blotted out by some low clouds on the eastern horizon. The gray skies didn't do much to motivate me to get out of camp.

I had been awake for a little while now but hadn’t come out of my sleeping bag. After all, I was quite comfortable. Inside the sleeping bag it was warm. Outside it was cold and breezy. I mentally debated with myself, but the “call of nature” took precedence and I wormed my way out of my warm cocoon. Instantly the wind hit. I felt its cold sting on my cheek as I scrambled to find my boots. Now I would have to brave this wind as I walked to the restroom that was a quarter of a mile away. No campsite is ever completely perfect. When I reached the restroom I saw a yellowish glow to the east. Was the sun going to break through the clouds?

When I returned from the bathroom, I found Ashlee was no longer in the shelter and had instead decided to try and make use of this blustery weather. She had walked on a short trail to the nearby cliff face overlooking Lake Texoma. I could see some splotches of color appearing in the sky so I grabbed my camera and met up with her. Below us a strong northerly gale was whipping up waves on Lake Texoma and sending them slamming into the boulders down below. These massive conglomerate stones are the result of erosion breaking down the softer layer the denser caps rest on. Once the lower layer is weakened or removed the caps come crashing down on the lake shore. It kinda makes you nervous standing on the same material that has fallen some thirty feet below you into the lake.

Wave after wave came crashing into the boulders down below us. When the waves collided with the rock the water split into a “V” shape sending thousands of droplets into the air. The spray and intensity of the water made me think of scenes along the coasts. Sure it was no Big Sur, but nonetheless beautiful. I knew I wanted to record this rare occasion, but to get the full (as my fiancé said it) “ferocity of the waves” I would have to create a composite. There were some technical challenges with that. First, I needed a clean base image to use for a starting point. Preferably an image captured at my lens' sharpest aperture with some good light. Then, I needed a shutter speed fast enough to stop the waves midair. Which meant increasing my ISO and or opening up my aperture to allow more light in. Basically, it meant I would degrade the quality of the image in favor of capturing the splashes.  Next, timing and patience was going to be key in capturing a wide variety of waves. Though the wind was coming from the north, it didn't always send big waves on the rocks so I was going to have to wait for the best moments.

The light did appear for just a few minutes and I was able to get my main shot. The sun had just peeked between the clouds and bathed my subject in a fantastic early morning glow. The white rocks do a great job reflecting that sunlight. This narrow strip of light created an excellent contrast to the darker water making an even more striking image. Now that I had captured my base image I could concentrate on photographing the waves. I spent the next half hour tracking and watching waves as they crashed against the rocks. I took the best 14 images to make this final composite and it really helps tell the story of that windy morning on Lake Texoma.