Storm season is here! Already there have been several supercells within an hours drive from Wichita Falls. You’d think I’d have more to show from it, but unfortunately, I have been busy with work and getting ready for a wedding a little over a month away. One the one hand, I am so disappointed I missed the incredible tornado outside of Vernon, but on the other, I am so used to missing big events now it barely phases me. It has been a long time since I personally have had a good storm chase season.

All this negative talk you’d think I’d given up on storm chasing and while its true I’ve been busy, I still was glued to the radar and kept watching the skies as the storms rolled in. Sure, I missed an incredibly photogenic supercell that put down several tornadoes an hour from my house…I can’t remember where I was going with that argument. Truth be told, it still stings, and it never gets any easier.

One thing that helped ease the pain was I got to meet up with my good friends and fellow storm chasers James, Zach, David, and Ted. I hadn’t seen these guys in years, so I was excited to meet up with them again. When I got off work, I decide to drive west in hopes of catching the last bit of storms for the day. As I drove closer and closer, I could get peeks of the updraft in between the murky hazy cloud coverage. It still looked quite impressive and photogenic., but I couldn’t get a good view before the sun went down. Thankfully, however, I met up with my friends just after sunset.

I turned north out of Dundee and met up with everyone. We exchanged greetings and they regaled their epic storm chase from the afternoon. They really ended up with some incredible photographs. We stood there under the undulating skies and feeling the cool breeze of the outflow. The storm was pretty much done (as far as tornadoes) and we decided to hang around and capture some lightning images. The storm moved just off to our northeast and at one point, we had a fantastic view of the updraft. Hints of silver moonlight were reflecting off the bubbly convection and bursts of hot plasma burst from the base creating an awe-inspiring scene. Sadly for me, my camera settings weren’t exactly right and all of those images were out of focus.

Luckily, I got my setting better for the next series of shots as new storms began building to our north. Again, we stood and watched along the roadside and I was able to capture this image of the lightning striking from the clouds. Although it is not the most impressive lightning shot I’ve captured, it is the first storm photo of my 2021 season. Honesty, I’m not sure how many more storm photos I’m going to capture this season. Regardless, I’d say getting married to the love of my life trumps a tornado chase. 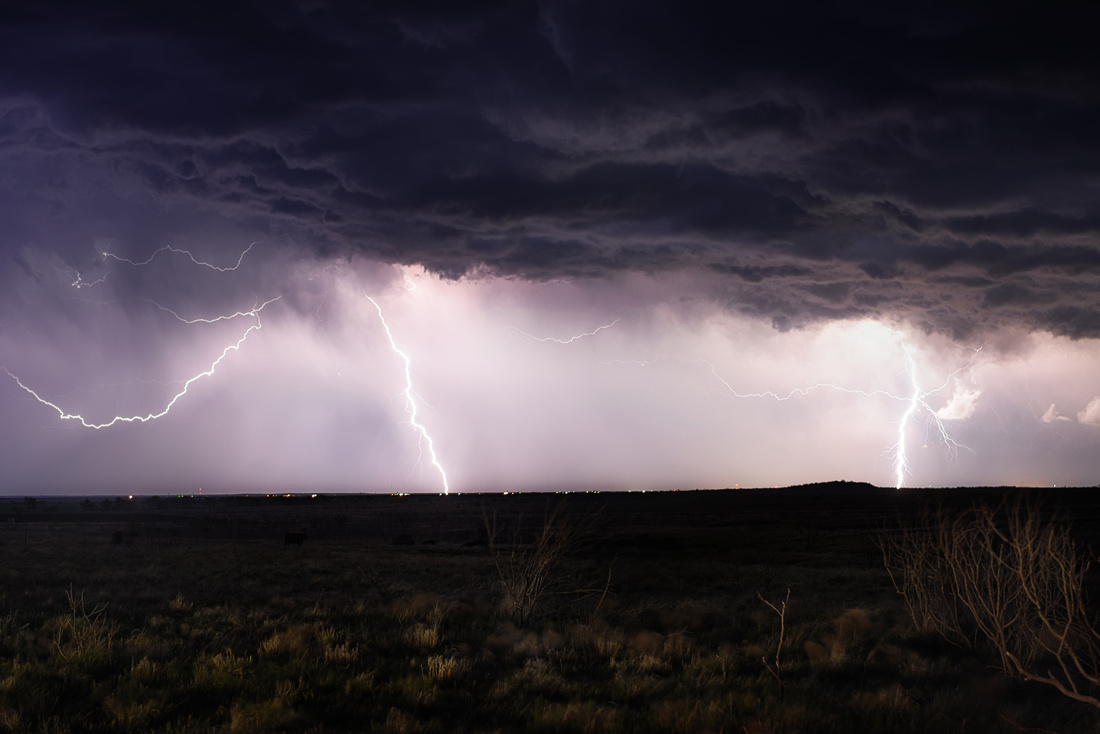