Let me first begin by apologizing for not posting over this past month, but I have been exceptionally busy. For starters I have moved out of my apartment and moved into a new single apartment in preparation for Ashlee to join me after we are married. It has taken a lot more time than originally expected. This was also on top of the busy week(s) I’ve been having with work and other responsibilities. But now things are starting to calm down, but we are just 8 days away from the wedding, so I anticipate things to get more hectic around that time. But I did get to go on an awesome trip with my lovely fiancé to celebrate her college graduation—oh yea I forgot to mention that. Yes, Ashlee has finally graduated summa cum laude with honors and she worked so hard over these past few years and I am ridiculously proud of her. 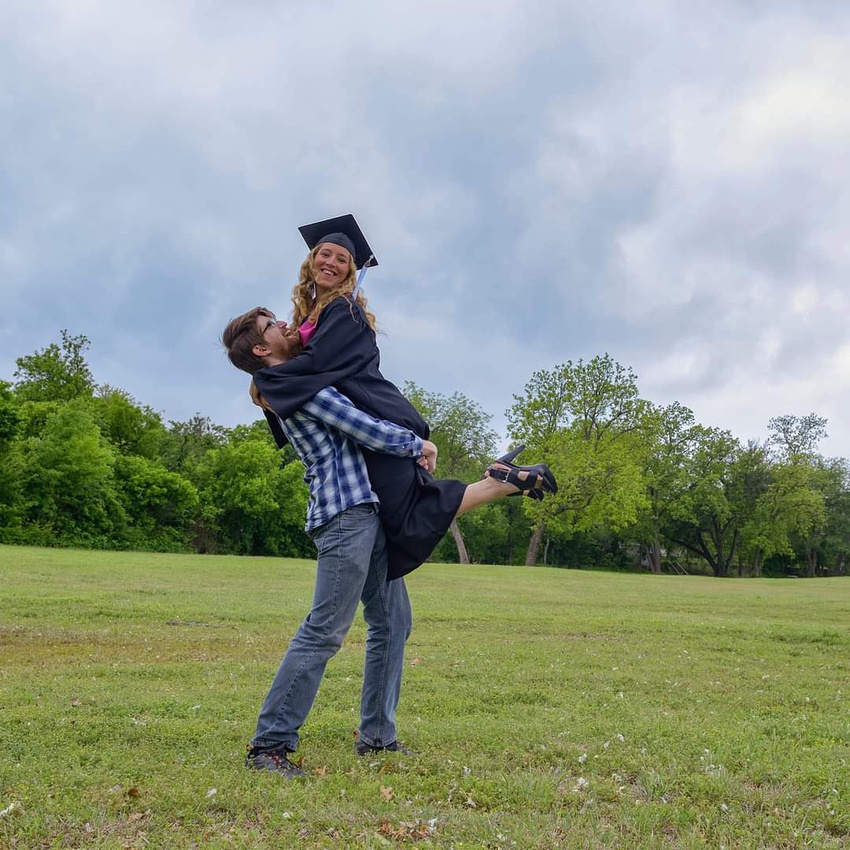 So, to celebrate all her hard work I told her we would go on a camping trip. When I asked her where she wanted to go, she said “Somewhere with dinosaur tracks.” I knew just the place. Unfortunately, all the campsites were booked for the weekend, so we had to camp at a different location. There was one campsite open at Lake Whitney State Park and I got it.

The plan was to drive out to Lake Whitney camp for the night and get up early to check out the trails at Meridian State Park just 40 minutes away. We would have lunch at Meridian before reaching our final stop and the main highlight of the trip, Dinosaur Valley State Park. Ashlee and I were both excited and ready to go camping again. We left Wichita Falls around 2pm and headed down to Lake Whitney. I had never been to this state park before, so my expectations were low. We arrived at Lake Whitney just after 5pm. Out front there was a sign letting visitors know the lake was 2ft above normal levels, which meant several areas of the park were closed. We took the short drive around the park to our campsite making mental notes of any good sunset locations along the way. After setting up camp we decided to go hit the only hiking trail available that day.

The Two Bridges Trail gets its name from the two wooden bridges that cross over the lake. It is a mild 1-mile loop that brings you through Post Oak forests and open prairie grassland. At one point the trail meets the lake which was a nice viewpoint. Along the trail we spotted several different birds including cardinals, blue jays, titmouse, and a white-eyed vireo. The trail was mostly flat and well maintained. In addition to the scenic viewpoints of the lake, there were large photogenic oak trees that dotted the shoreline. While this area was beautiful and scenic, the assault of mosquitoes was not very appealing. We completed the loop and had enough time to scout out a different sunset location. After scoping out some areas with little success, we made the decision to try the swim beach area, as this would give us the easiest access to the lake.

Since the lake levels were higher than normal, a lot of the swim beach had been swallowed up by the lake. The gusty winds kept bringing waves of lake water crashing into the trees and picnic tables of the area. This looked like it would be an ideal swim location under more favorable conditions, but very few people were out enjoying the beach. I spotted a tree being slammed by larger waves and thought that could make an interesting photograph. Ashlee and I made our way out to the lake edge and Ashlee quickly changed her attention to some goslings flitting about in the grass. While Ashlee shot the geese, I turned my attention to the sunset. Clear skies and not much clouds on the horizon lowered my spirits, but I was already here so I wasn’t going to come back empty handed. 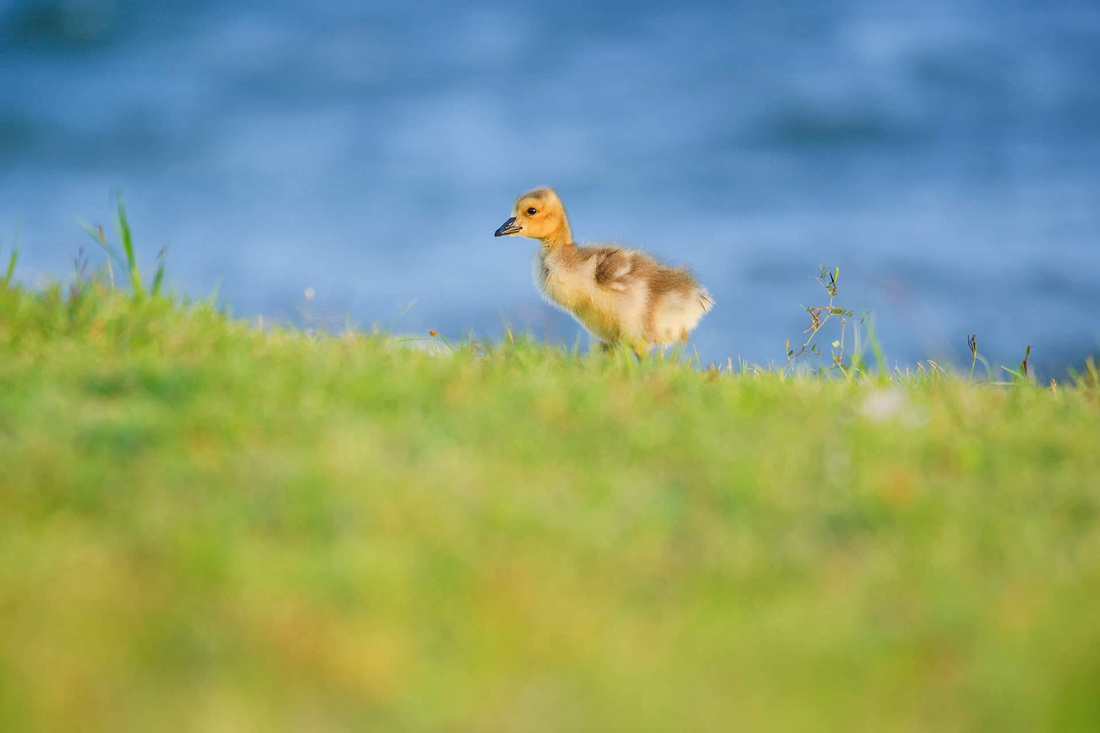 Ashlee's photo of one of the goslings.

I had an idea to capture the approaching waves splashing through the trunks of the trees. I tried a variety of different shutter speeds to use for a possible blend later on. Something in me didn’t want to do a blend, however. Sometimes, I can get lazy with landscape photography and its easy to just “spray and pray” or rely on post processing to fix my mistakes or create something better. This time, I wanted to see if I could capture that pivotal moment in one exposure. Had I been so reliant on exposure blending that I didn't know how to time and carefully execute my shot? Could I still even capture an image I hade envisioned without the use of exposure blending? I had an idea for the shot I was going for, I wanted to catch a wave splashing through the trunks of the trees, with another wave about the crash behind it, and interesting patterns or shapes in the retreating waves in the foreground. So that meant I had to wait for one wave to crash through the trees, reach the shore, and start retreating back into the lake while simultaneously another wave crashed through the tree trunks, and other waves in the background reaching their ideal height and shape. And all of this had to happen in 1/6th of a second. It is much easier said than done, but I was able to capture a great moment with almost all the elements in place. 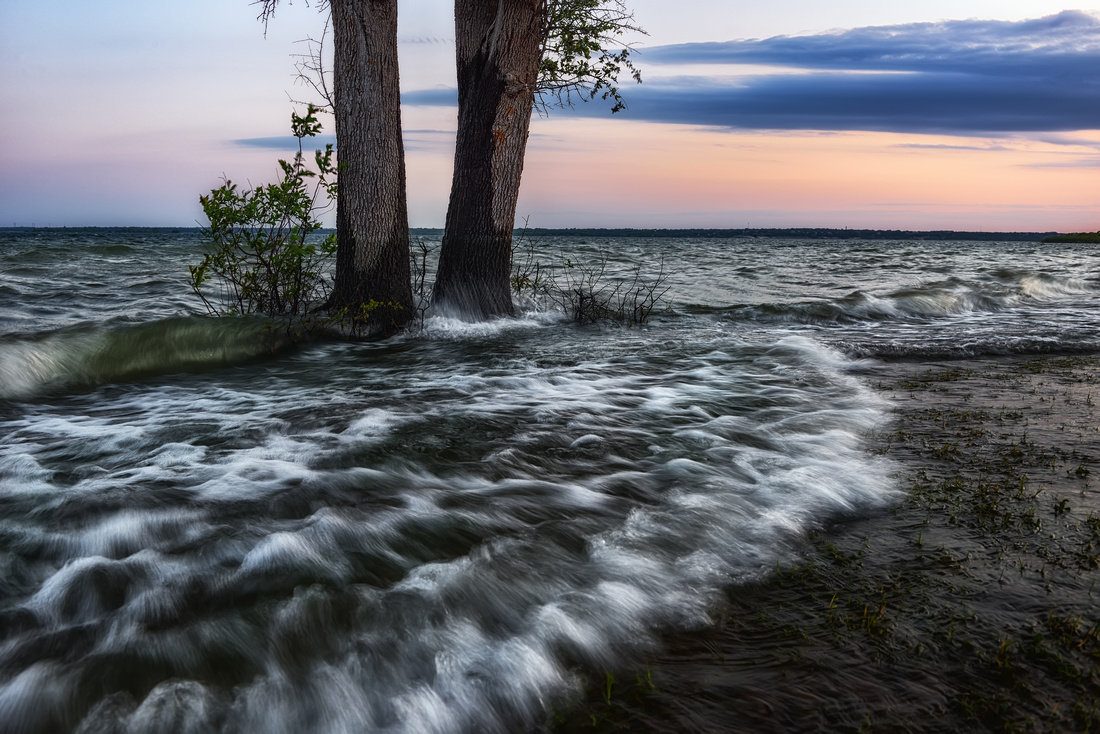 I would’ve liked to see a larger splash in the background (and there were some nice ones), but that secondary wave and the patterns in the foreground help draw the viewers eye into the scene. I also lucked out with some decent clouds in front of the soft pastel glow of sunset which added a little more color to the photo. It was a nice way to end our day. We stood on the shore watching the waves come in until dark. We packed up and got rested up for our new adventures coming the next day. I have plenty of new images I'll be sharing with y'all over the next few weeks. Next week I'll be getting married and the week after that I'll be on my honeymoon. We still don't know where we're going (its a surprise from our parents), but we are very excited for this adventure!