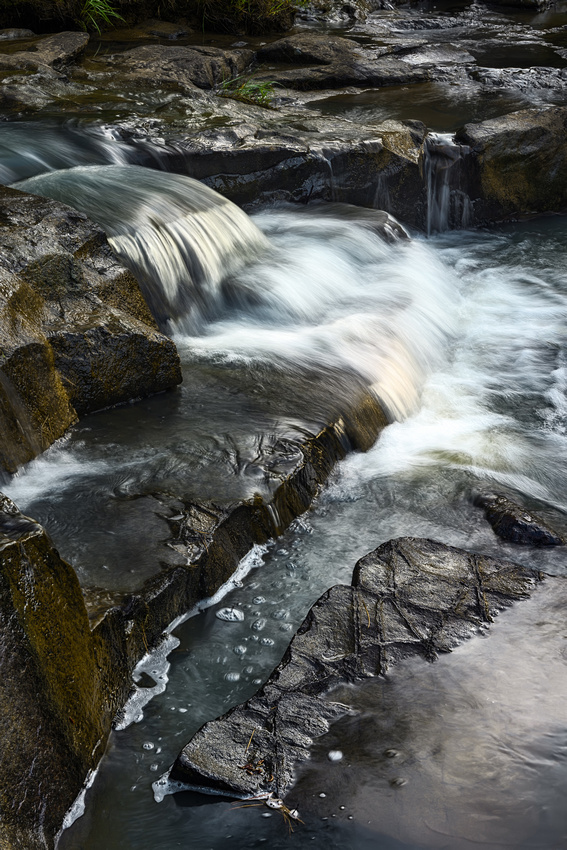 The Honeymoon Adventure continues! On what was originally supposed to be our last day, Ashlee and I woke from our room at the Belle Starr View lodge. We had spent the previous day driving to the park and hiking/exploring Robbers Cave. Now we were hoping to hike a few more miles before bidding adieu to Robbers Cave State Park. Right outside our door was the trailhead to the Belle Starr Trail Loop. This trail is rated as easy, but the rocky terrain and elevation changes keep the hike interesting.

The sky that morning was crystal clear which likely meant were not going to shoot sunrise images. Regardless, we were still eager to get out on the trail and see what we could find. The trail starts out on the top of Coon Ridge and follows a path through the forest behind some of the cabins. Following the white blaze markers, you start to quickly lose elevation as the trail takes you down the ridge. Slowly and steadily, we navigated the rocky terrain keeping mindful and careful of our footing—this was ankle twisting territory!

After a short while, we reached the edge of the rock outcrop. Now it was time to get down. The path switchbacked its way down through the rock garden. Walls of conglomerate sandstone encircled us as the trail lead us downhill. This was a favorite part of both Ashlee and I. Maybe its because we’re both from north Texas, but tall rocks mesmerize the both of us. Eventually, we reached the end of the hill and the intersection of the Equestrian multi-use trail. Directly across our line of sight, the still waters of the Coon Creek reservoir reflected the unique topography in the morning stillness. We stood there admiring the mirror-like reflection before moving onwards on the equestrian trail.

Equestrian trails are usually quite a bit different from standard hiking trails. For one, they are wider to accommodate the larger modes of transportation. The also tend to be less rocky and sandier or gravely. This can be both good and bad. Good in that the trail is pretty easy to find and stay on. But bad when it rains. The path came to a junction with a closed off service road. The white (and now yellow) blazes disappeared from the trees, and I wasn’t sure where the trail was. Keeping the same direction, we came to a muddy bog with hoof prints in the mud. We looked up in the trees and saw another yellow blaze with a sign saying “CAMP” we were back on the trail.

For another half mile was walked amongst the forest listening to the birds call and running face first into spider webs! We reached another marker on the trail, this time it pointed us to the direction of the old CCC pumphouse. I could hear the spray of the water as it careened down the dam and after a bit more walking, we were able observe it with our eyesight. Although interesting for the historical context, these structures don’t really do anything for me or my photography. So, I have to say I was disappointed, I had hoped we might run into some small rapids or waterfalls.

Once we walked past the pumphouse; I could make out the sound of rushing water. Now I was much more excited and as we approached the source of the noise, I disregarded the junction to our return trail. I was focused on the creek and oblivious to the world around me.  But we did find a nice cascade on Coon Creek. Ashlee and I spent the next half hour jumping from rock to rock photographing this small waterfall. Though not as impressive as some of the others we’ve experienced, this one was entirely new, and I had no idea it was on the trail. I was glad I had a reason to pull out my camera on this hike.

Our clear skies were now being encroached by low hanging clouds to our north. This sent streaks of golden light on our waterfall. I was particularly pulled in, by this fascinating rock in the creek. I thought it would serve as a good anchor point for my composition. After playing around with the shot, I decided to try a vertical orientation and I found the comp had a much better flow. I really love the texture on that foreground rock. Its unique patterns and lines point the eye directly to the sunlit portion of the waterfall, which brings the eye to the main cascade. The color and light in this image is so subtle that it creates a stark contrast against that dark rock. Sure, it may have taken a little extra effort, and I did get my feet wet, but all in all I would say it was worth it!

Ashlee captured this image of me perched on a small rock trying to avoid getting wet in the creek.

Our adventure is not over yet, after the waterfall we followed the equestrian trail for a short distance. Here we came across a creek crossing, but something didn’t feel right. We were not going the right direction. Thankfully, I had cell service and I discovered that we missed the trail junction…whoops. We crossed the creek again and met back up with our trail. We began our uphill ascent to return to the Belle Starr View Lodge. After another .8 miles we made it back to the lodge. Although a short 2 miles, it really was a wonderful hike and I highly recommend it if you visit Robbers Cave State Park. After reaching the lodge, we packed up our gear and luggage and got ready to check out.

I thought this was the end of our Honeymoon Adventure, but on our way back home I saw a sign that said “Talahina 60 miles”. That got me thinking, maybe we could stay one more night on the Talimena Scenic Byway. Ashlee had never been there before, and I knew she would love it. On a whim, I called Queen Wilhelmina State Park Lodge to see if there were any vacancies. To our remarkable fortune, they had just had a cancellation a few minutes prior to my calling. Ashlee and I had a brief discussion, something like, “Wanna go?” “Uh, YES!”, and we made our reservation. We would stay one more night on our Honeymoon Adventure at the Queen Wilhelmina State Park Lodge on Rich Mountain in Arkansas and get up to hike and explore the Ouachita Forest the next morning. Basically, I’m setting the stage for next week’s Pic of the Week. There’s still one more day left from this trip.